In line with the theme of the day - "From online violence to digital respect" - the BIK Youth Panel began their session with a striking "slur word performance" and a theatre play about scenarios Insafe helplines encounter. After this performance, the panellists welcome the participants and introduced the group, comprising of 26 young people from 20 countries across Europe. They kicked off with an interactive session with table discussions around the room, each led by a youth panellist.

After these discussion, each youth panellist reported back in plenary on their chosen theme and the discussions that took place at their respective tables. Key topics and issues included: 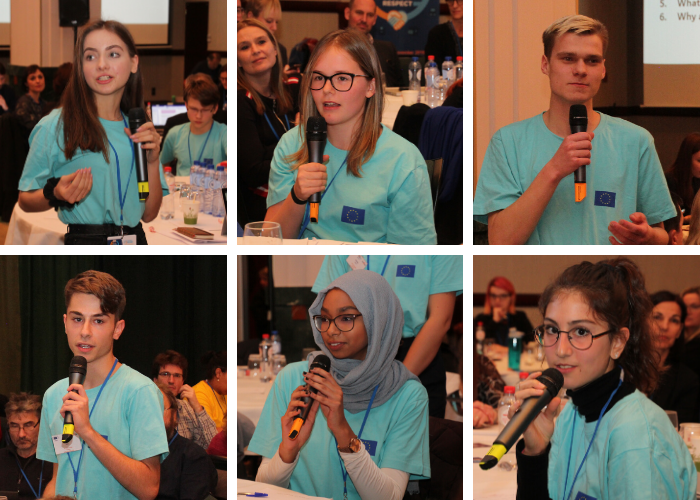 After this, Frida called upon all stakeholders present in the room to take responsibility for keeping children and young people safe online. She underlined the importance of building a community, and having open ears for those that are targeted by online violence in any form.

The youth panellists then presented their Instagram account, BIK.YouthforYouth, and examples of what they have been doing during five weeks of preparatory meetings preceding the SIF. When asked by a member of the audience whether they are on other social media platforms, they replied that the campaign was carried out only on Instagram, but that the BIK Youth Panel is also carrying out a take-over of the @BIK_Youth Twitter account on the day of the SIF. They were then asked at what age they think education should start; in which form they experienced that; what works and what can be done better. One of them replied that educating adults is key, so that they can educate children adequately regarding online risks. As such, education efforts should start as soon as kindergarten, if possible.

Another question from the audience related to the reasons why some people do not feel comfortable talking to their parents, and what parents can do better. A youth panellist replied that everyone's parents are busy, so they might feel like they are wasting their time. Also, young people often feel like their parents will not be able to help them with problems encountered online so, once again, educating parents is key. Moreover, some issues online can also be very personal. They explained this miscommunication with parents by the fact that the internet became mainstream not so long ago and, as a consequence, they are the first or second generation to face these brand new issues. Their parents have not and, as such, they cannot relate to their problems, and generally go for the easy solution: they advise their children not to use the internet altogether.

Another question from the audience related to what the young people would miss most if they lost their phone. Among the replies given by the young people were the ability to communicate with parents, grandparents and friends; keeping up to date with schoolwork; and developing their creativity and sharing their work with others.

Another member of the audience asked them whether they would find awareness-raising videos for adults about specific issues encountered by young people online interesting. The youth panellists replied that it would be, as it takes away the personal side which can be embarrassing. They also suggested giving parents tips on how to talk about common issues, so that they can start the conversations. Parents have to realise that it is their problem too, even if they themselves did not grow up in the digital age.

After receiving many congratulations from the audience, the youth panellists thanked the attendees. Karl Hopwood thanked them and invited them on stage, highlighting the importance of involving young people in the discussions around their own online safety.