Share
In each edition of the BIK bulletin, we look at a topical issue – this time we take a look at the work of internet hotlines. INHOPE is an association of internet hotlines, comprising 48 hotlines in over 40 countries across the globe. Through INHOPE hotlines, members of the public can report illegal online content, including child sexual abuse material (CSAM), anonymously so that the content can then be removed from the internet.
Last year, over 259,000 images and videos of child sexual abuse were identified by INHOPE's network of hotlines. While this number is alarming, it only represents the number of reports that were sent to the hotlines; there is still an unknown number of illegal content items available online. This, nevertheless, highlights the importance of the role of hotlines in taking down CSAM from the internet and thereby making the internet a safer place for all.
To effectively fight against online CSAM, INHOPE has developed ICCAM, a secure software solution to collect, exchange and categorise reports on child sexual abuse material. ICCAM is used by INHOPE hotlines in different countries and by INTERPOL. The name ICCAM is derived from the phrase "I see child abuse material". INHOPE collects data from ICCAM that is used to better understand the scope of the online distribution of CSAM. The statistics provided on an annual basis support INHOPE and member hotlines in lobbying activities and influencing international policy makers and stakeholders.
Hotlines are largely dependent on the public reporting illegal content to them. Only after a report has been received can action be taken, with the hotline typically passing on relevant information to law enforcement agencies (LEAs) or internet service providers (ISPs) to take down child sexual abuse material. Thus, it is critical to raise awareness among the general public that CSAM is a grave offence and should be reported. It is also important to note the usage of the correct terminology in this domain.
On this point, Martyna Różycka, head of the Dyżurnet.pl team, the Polish hotline, says, "Materials commonly referred to as child pornography are in fact evidence of a crime involving the rape of minors. The term ‘pornography' may be used to refer to adults voluntarily involved in sexual acts and the resulting production of materials. Meanwhile, pictures and films showing sexual violence against minors are a completely different category of materials. They are an element of a crime and continuous distribution of these materials on the web is an inconceivable burden on the victims. The correct term to be used is therefore ‘child sexual abuse material'."
Online CSAM is a borderless crime and requires a multi-stakeholder approach. From governmental bodies to corporates, from law enforcement agencies to global institutions, everyone has a role to play in stamping out online CSAM. With effective partnerships, hotlines - in collaboration with internet service providers and law enforcement agencies - can take down CSAM from the internet.
Carmen Ploner, an analyst from Stopline, the Austrian hotline comments, "We are pleased to state that Notice and Takedown (NTD) works really well in Austria. This is on account of the strong relationships and close cooperation with the involved parties, especially law enforcement agencies and ISPs. The direct cooperation with the hosting ISPs also functions well largely due to the support of ISPA, the Austrian Internet Service Provider Association. ISPA, the umbrella organisation of the internet industry, informs its members regularly about the work of Stopline. Therefore ISPs are well informed on how to deal with the NTD procedure if contacted by Stopline; often they provide us with specific email addresses for immediate contact."
However, this effective collaboration is not the case across all countries. Tomislav Ramjak, a hotline analyst from the Croatian hotline says, "The Center for Missing and Exploited Children has been an INHOPE member since 2013 and, earlier this year, we also received the INHOPE quality assurance certificate. While we receive support from law enforcement, it is primarily for the prevention aspect of CSAM whereas analysing content still remains outside of our reach. It is ironic that both of the analysts who work at the hotline are court experts for CSAM and very often provide expertise to state attorneys. However, we still do not have the authority to assess CSAM. We require a lot more support from key stakeholders, like the European Commission, to help us become an even more effective partner to tackle and take down online child sexual abuse material."
In 2017, the INHOPE network of hotlines removed 62 per cent of the reported content from the internet within three days.

CSAM Notice and Takedown time,
Source: INHOPE 2017 Annual Report
Illegal content is hosted across the world, with some countries emerging as hotspots for this activity. 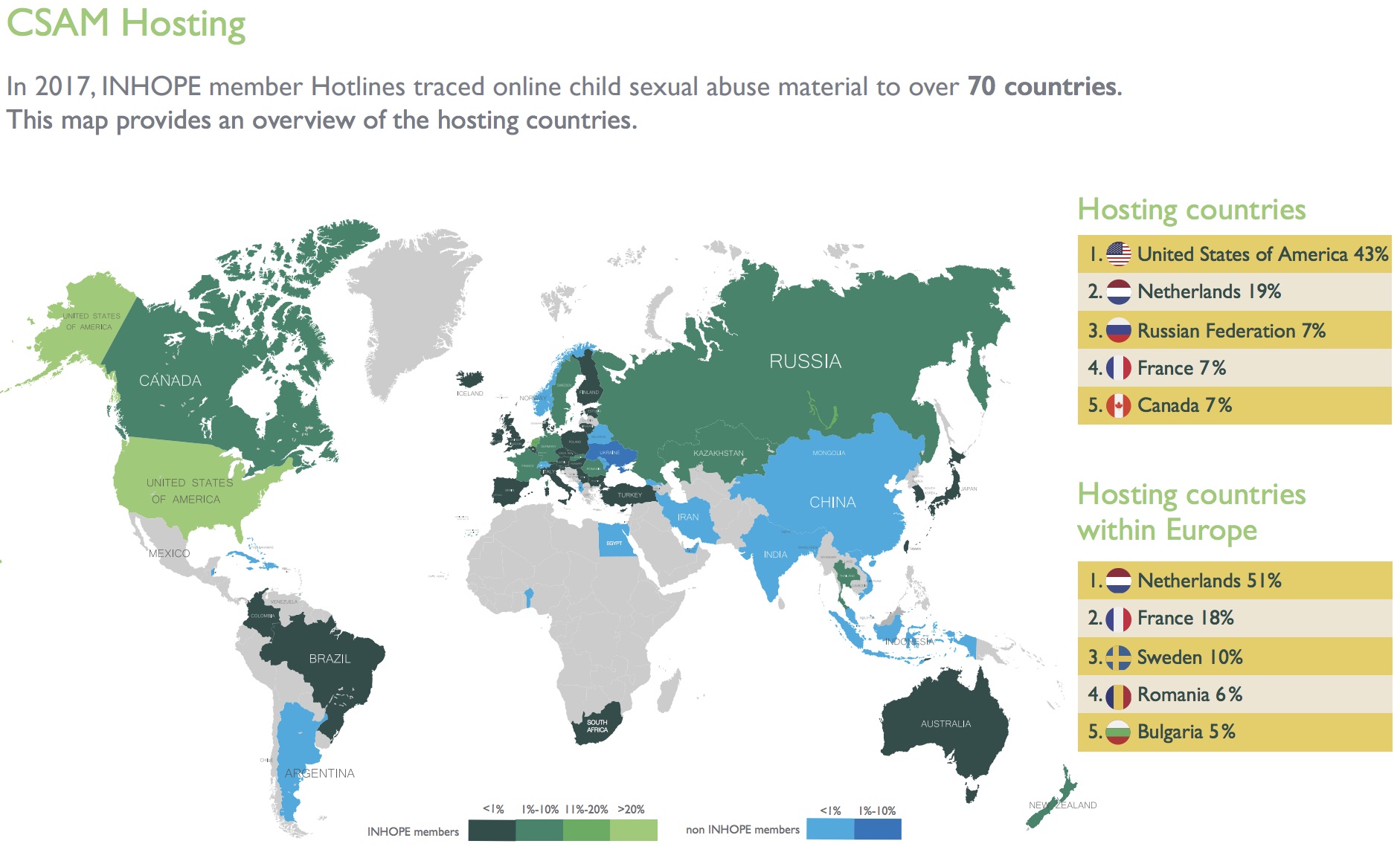 CSAM hosting worldwide,
Source: INHOPE 2017 Annual Report
Speaking on this issue, Sander de Gruijl, a hotline analyst and data protection officer at EOKM (the Dutch hotline) explains, "The Netherlands, and specifically Amsterdam, boasts a strong digital infrastructure. This is largely due to the Amsterdam Internet Exchange, one of the largest data transport hubs in the world, that attracts companies to set up their data centres in the country. The Netherlands also has a high concentration of sea cables from across the world to enable digital connectivity across the region, accounting for strong internet services in the country. All this makes the Netherlands a top destination for businesses, including internet service providers (ISPs) who host their servers here. The downside to this digital environment is that it also attracts hosting of illegal content. In 2017, we received over 150,000 reports and, while most ISPs are reactive in taking down illegal content, there are a large number of bulletproof ISPs based here. Bulletproof ISPs are hosting companies that place a high value on the privacy of clients who host on their servers and, consequently, some of these hosting providers ignore illegal activity on their servers." 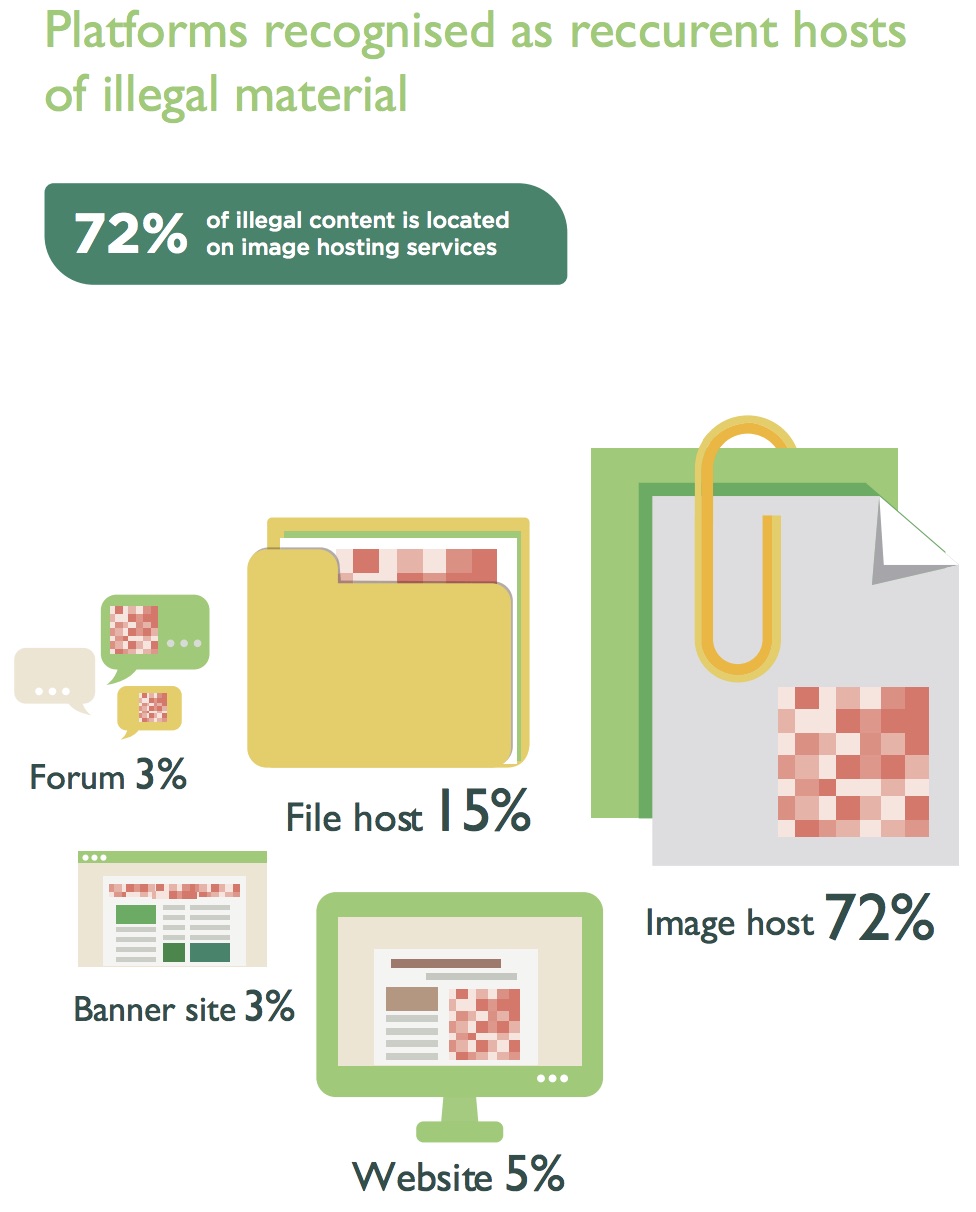 Platforms recognised as recurrent hosts of illegal material,
Source: INHOPE 2017 Annual Report
CSAM is hosted on various platforms and, in 2017, the INHOPE network of hotlines located 72 per cent of illegal content on image hosting services. Image hosting services allow users to upload images and make them available through URLs. However, hotlines are also noting a trend in using cyberlockers, an internet hosting service that allows users to store files to share with other users.
Peter-Paul Urlaub, a consultant at eco's complaints office, one of the German hotlines, further elaborates, "We indeed saw an increase in cases using cyberlockers or filehosts last year. While many people use these services to share legal files, these services are also abused for sharing illegal content like CSAM. Some of the content can only be downloaded if a (fee-based) premium account is present. Other files can be downloaded without a premium account, but the download speed is reduced, meaning the handling of the case takes a lot more time. Additionally some files need a password for the extraction, without which we cannot access the content. We therefore rely a lot on the reporters to give additional information like the source of the URL."
INHOPE and its network of hotlines continue the fight against CSAM to make the internet a safer place for all, and especially children and young people. For more details on INHOPE's activities, please refer to the INHOPE website and the 2017 edition of its Annual Report.
In this edition of the BIK bulletin, many hotline members share additional insights on the challenges they face, and the trends they are seeing:

View the full June 2018 edition of the BIK bulletin.

The latest edition of the Better Internet for Kids (BIK) bulletin is now available. In it, we look back on the success of the recent Safer Internet Forum (SIF), and look forward to Safer Internet Day 2019 (SID) where we'll be encouraging people across the globe to join "Together for a better internet" on Tuesday, 5 February.

New challenges for the Bulgarian hotline

In the June 2018 edition of the BIK bulletin, we look at hotline trends and issues, hearing also from various members of the INHOPE hotline network. Here, we hear from the Bulgarian hotline on the significance of cooperation and information exchange in the hotline community.

In the June 2018 edition of the BIK bulletin, we look at hotline trends and issues, hearing also from various members of the INHOPE hotline network. Here, we hear from the Child Protection and Finnish Hotline Unit on several of its approaches, including awareness-raising strategies.

Issues and challenges of fighting CSAM in France

In the June 2018 edition of the BIK bulletin, we look at hotline trends and issues, hearing also from various members of the INHOPE hotline network. Here, we hear from the French hotline on how it is responding to new challenges.

In the June 2018 edition of the BIK bulletin, we look at hotline trends and issues, hearing also from various members of the INHOPE hotline network. Here, we hear from the Luxembourgish hotline on recent trends.

In the June 2018 edition of the BIK bulletin, we look at hotline trends and issues, hearing also from various members of the INHOPE hotline network. Here, we hear from the Colombian hotline on its work to protect the nation's children.