In 2017, ECPAT Taiwan analysed over 9,300 reports which were made to its Web547 reporting hotline. 1,644 of these were related to child sexual abuse and exploitation including issues of online enticement of children, child sexual abuse material (CSAM), child erotica, and so on. This number has increased threefold from 2016 to 2017. 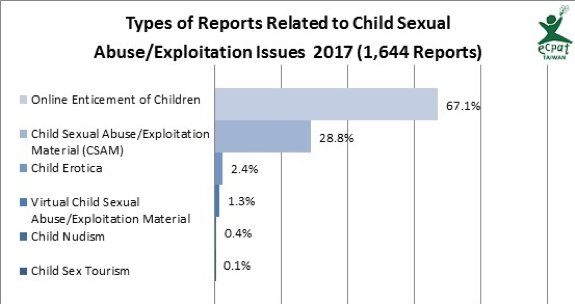 In 2017, for the first time, online enticement of children ranks highest with around 67 per cent of reports relating to this issue. Most of these cases targeted male children and exploited their emotional needs and curiosity concerning physical development. They were enticed to take nude selfies or even join secret chat groups set up to recruit potential victims.
Public messages of such enticement are taken down after the hotline reports them to internet companies. However, it is difficult to deal with cases which occur in private spaces. In these cases, children can be harmed and nobody will know, especially when these private spaces are created for the purpose of committing crimes against children.
ECPAT Taiwan observed that victims of online sextortion, which involves being forced to produce and share nude "selfies", were often afraid to ask parents or other adults for help. Victims felt ashamed as they were being "sextorted" and their nude selfies were being distributed. These victims suffer from self-blame, anxiety and depression, thus keeping the problems to themselves. This indicates that schools, families and children in Taiwan still lack awareness of online sexual exploitation, and that society lacks the resources that will make the victims feel safe to ask for help.
97 per cent of CSAM reports were on Simplified Chinese language forums. The hotline found that these forums establish a profit-making and membership upgrade mechanism wherein members earn by distributing URLs of the forums and by attracting more people to register as new members. It forms a criminal culture of continuously sexually abusing or exploiting children and producing more CSAM. It's a great challenge for law enforcement to fight against the crime.
By way of background information, the Taiwan Child and Youth Sexual Exploitation Prevention Act regulates that shooting or producing, distributing, broadcasting and selling images, photos, films, video tapes, CDs or electronic transmission of other products of sexual intercourse or obscenity of a child or teenager will be sentenced to a limited imprisonment with a fine. Possessing the aforementioned items without proper reason will be sentenced with a fine. Find out more about the Taiwan Child and Youth Sexual Exploitation Prevention Act.
See the see the INHOPE website or the Taiwan hotline website for further information.
See also the BIK portal article, ECPAT Taiwan highlights issues of online enticement, nude selfies of children and sextortion for SID, for more on this issue.

In each edition of the BIK bulletin, we look at a topical issue – this time we take a look at the work of internet hotlines. INHOPE is an association of internet hotlines, comprising 48 hotlines in over 40 countries across the globe. Through INHOPE hotlines, members of the public can report illegal online content, including child sexual abuse material (CSAM), anonymously so that the content can then be removed from the internet.

New challenges for the Bulgarian hotline

In the June 2018 edition of the BIK bulletin, we look at hotline trends and issues, hearing also from various members of the INHOPE hotline network. Here, we hear from the Bulgarian hotline on the significance of cooperation and information exchange in the hotline community.

In the June 2018 edition of the BIK bulletin, we look at hotline trends and issues, hearing also from various members of the INHOPE hotline network. Here, we hear from the Child Protection and Finnish Hotline Unit on several of its approaches, including awareness-raising strategies.

In the June 2018 edition of the BIK bulletin, we look at hotline trends and issues, hearing also from various members of the INHOPE hotline network. Here, we hear from the Luxembourgish hotline on recent trends.

In the June 2018 edition of the BIK bulletin, we look at hotline trends and issues, hearing also from various members of the INHOPE hotline network. Here, we hear from the Colombian hotline on its work to protect the nation's children.

On Safer Internet Day 2018, ECPAT Taiwan, in partnership with Facebook, Microsoft Taiwan and the Taiwanese Ministry of Education, held a press conference to raise public awareness on the online safety of children.