We are living in unprecedented times – the global pandemic that we are all dealing with has confined many of us to our homes including children and young people. UNESCO estimates that over 130 countries have implemented nationwide school closures impacting on over 80 per cent of the world's student population. Clearly technology can bring huge benefits as it provides important information, as well as a means for communication and for many people to maintain that important contact with friends and family. Many of us have also been getting to grips with online meeting technologies in order to WFH (work from home) and try to keep things operating in our daily lives. However, it is also important to recognise the challenges that the current situation is bringing in relation to technology. Some online platforms have struggled to cope with demand as more people try to use them and this is a good time to remind ourselves of the risks that children and young people can face when they are communicating online. 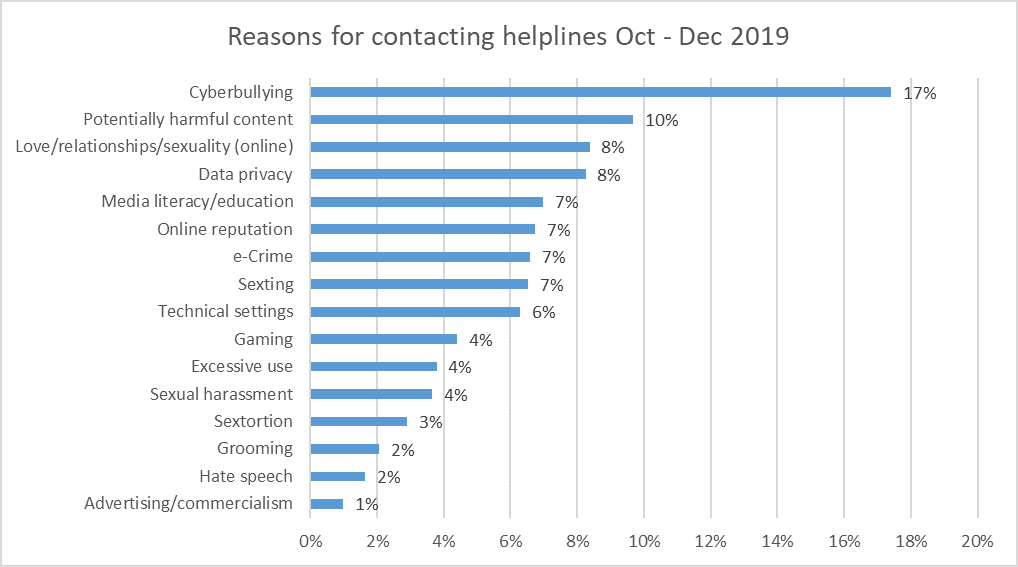 Some helpline services have seen a significant increase in calls from children and young people concerning COVID-19 – of course they are worried and have questions. As always, helpline staff do their best to provide support and reassurance. Equally helplines are having to look at how they can continue to operate and protect their own staff who are performing such an important role.

The most recent data collection covered the period from October to December 2019 inclusive and so does not reflect any increases in calls that have come about as a result of the current situation. During this period, the network received 13,201 contacts, which is a significant increase on the previous reporting period (an increase of over 350 calls). This was perhaps due in part to the fact that some helplines have organised awareness raising campaigns which have clearly been successful in promoting the helplines. It should also be noted that the beginning of the school academic year can also show an increase in calls.

40 per cent of contacts were from males during this period and as usual the vast majority of calls (56 per cent) were from the teenage group (12-18 year olds). Looking at the year 2019 overall it is clear that there was a noticeable increase in contacts from teachers which perhaps recognises that in some countries, schools are expected to deal with online safety related issues on a more regular basis – often needing to intervene even when the issue did not take place during school time.

The most popular way to contact a helpline is by phone but 64 per cent of helplines now offer the possibility to use chat to make contact.

As usual, the main reason for contacting helplines is cyberbullying with 17 per cent of all calls relating to this. Percentages of calls concerning other issues have remained largely unchanged from previous reporting periods with only some slight fluctuations.

TikTok was mentioned by several helplines and the growth in popularity of the platform is clearly being reflected in the number of reports being received. TikTok attended the last Insafe Training meeting and recently supported Safer Internet Day (SID) too, and a good relationship has been established including a dedicated channel for escalating/reporting cases.

Several helplines specifically cited cyberbullying issues, and some felt that this was because many schools are raising awareness of this type of harm at the beginning of the school year and, as a consequence, pupils are more likely to report concerns or incidents.

Group chats were also highlighted by a number of helplines with some concern about very upsetting and harmful content being shared within these groups – the impact can be quite extensive particularly with younger users. In some cases there could be a WhatsApp group for an entire school year and one person is able to reach hundreds with challenging content. Some children can be reluctant to remove themselves from such groups as they worry about missing out on more important conversations and so there can be a real dilemma here.

Helpline statistics can be accessed in detail at www.betterinternetforkids.eu/helpline-statistics where country comparisons can also be made.

Discussing the European Strategy for a Better Internet for Children

From Monday, 11 to Wednesday, 20 May 2020, COFACE Families Europe is marking the International Day of Families 2020 by hosting Digital Citizenship Breakfast Bytes, a series of eight 90-minute online sessions (from 9:30-11:00 CET) aiming to increase critical thinking and understanding of the digital world. Named "European Safer Internet Strategy post-2020: key trends and priorities", the Breakfast Byte of Wednesday, 13 May 2020 focused on the European Strategy for a Better Internet for Children, which is currently under revision.