The most recent data collection covered the period from July to September 2019 inclusive and saw 9,671 contacts (a decrease on the previous reporting period) which all related to online issues. Several helplines noted that the reduction in the number of contacts was due to the long summer holiday period which sees lower numbers of callers in some countries. In the last quarterly report, there had been a reduction in the percentage of calls from teenagers but this apparent trend has reversed during this reporting period with 59 per cent of calls from this group. As mentioned earlier, the summer holiday period may have potentially skewed the data and it will be interesting to see what the final quarter of 2019 looks like.

42 per cent of contacts were from males during this period which is a slight rise on Q2 of 2019. 76 per cent of helplines received more calls from women and girls which is a marked increase on the 63 per cent in the previous quarter.

Once again, the main reason for contacting a helpline is cyberbullying, accounting for 18 per cent of all contacts. Sir Tim Berners Lee, credited with being the founder of the world wide web, published a Contract for the Web on its thirtieth anniversary, during November 2019. He noted that: "The web was designed to bring people together and make knowledge freely available. It has changed the world for good and improved the lives of billions. Yet, many people are still unable to access its benefits, and, for others, the web comes with too many unacceptable costs."

It is perhaps not surprising then, that cyberbullying continues to cause the greatest concern for children and young people. The last quarterly report noted that 22 per cent of all calls concerned love, relationships, sexuality online/sexting/sexual harassment and sextortion – this has risen by two percentage points to account for 24 per cent of all calls. The recent Safer Internet Forum (SIF), which took place in Brussels, Belgium on Thursday, 21 November 2019, focused on the need to move from online violence to digital respect; these figures illustrate that there is clearly still much work to be done. Insafe helplines - and awareness centres - continue to work tirelessly to raise awareness of the issues and to try and empower children and young people to take control and report any problems that they are facing online.

Deep fake content was also mentioned as a growing concern. The ability to create images and videos of a very high quality, depicting someone in a situation that they were never actually in has become more widespread and of course the technology is being misused in some cases. One helpline explained that innocent photos had been taken from social media and then photoshopped in order to remove a bikini, causing understandable concern for the individual involved. Given the rise in availability of this type of technology, this is something which will need to be monitored. 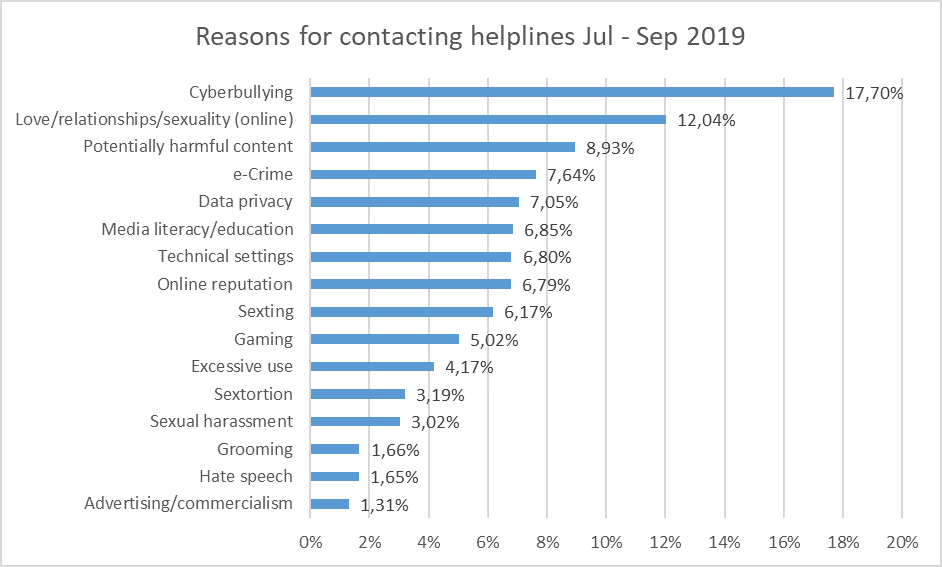 Helpline statistics can be accessed in detail at https://www.betterinternetforkids.eu/helpline-statistics where country comparisons can also be made.