The most recent data collection covered the period from July to September 2018 inclusive and saw 10,169 contacts which all related to online issues. 65 per cent of calls came from teenagers; a slight reduction from the previous reporting period, but once again highlighting the challenges that this group face when they are online. 13 per cent of contacts came from the 5-11 year old age group; this percentage is consistent with previous reporting periods and indicates the challenges that ever-younger users face when they go online. It also shows that younger children have access: something which will no doubt will increase with Christmas coming up and children hoping to get tablets and phones as gifts.

As usual, the most common reason for contacting helplines is cyberbullying which accounted for over 17 per cent of all calls.

There has been a rise of two percentage points in the number of calls relating to e-crime during this reporting period, and a rise of three percentage points in calls relating to sextortion with this issue now accounting for six per cent of all calls. These two issues can be linked, and law enforcement agencies have recently talked about the resurgence of a scam which is proving very successful for the criminal gangs who are behind it. A user will receive an email telling them that some malware was placed on their device a few months earlier, which has allowed the criminals to capture video content through the webcam on the device. They threaten to share the video content (which they allege includes sexual images captured while the user was viewing pornographic content). Users are then told that in order to stop the video content being shared, they will need to pay a specific amount of money in bitcoin (and instructions are provided on how to do this). Many users will spot that this is a scam at this point, but the email also makes reference to a password belonging to the user. This password will be a genuine password and it is this that causes concern and gives credibility to the whole scam. Law enforcement agencies have explained that these criminals get access to usernames, email addresses and passwords through old data breaches. As we know, data breaches occur regularly with large and small organisations online. Recently we have heard about Facebook admitting that up to 50 million accounts were attacked and then Marriott announced that 500 million accounts were compromised with data including passport information. Users can check if their information has ever been compromised through a data breach by using the well-known "Have I been pwned?" site - https://haveibeenpwned.com/. Police who are monitoring the bitcoin wallets say that they have considerable amounts of money in them, indicating that many people are falling for the scam and paying the "ransom". Once again, the link between awareness raising and helplines is vital.

Gaming featured frequently in reports from helplines with Fortnite in particular being mentioned. The game continues to cause concern for many parents for a variety of reasons including inadvertent spending of real money within the game and the worry that their children are talking to strangers. A recent press report in the UK stated that Fortnite had been cited in over 200 divorce cases in 2018 which clearly demonstrates that this is not solely a problem for children and young people!

Helpline statistics can be accessed in detail at www.betterinternetforkids.eu/helpline-statistics where country comparisons can also be made. 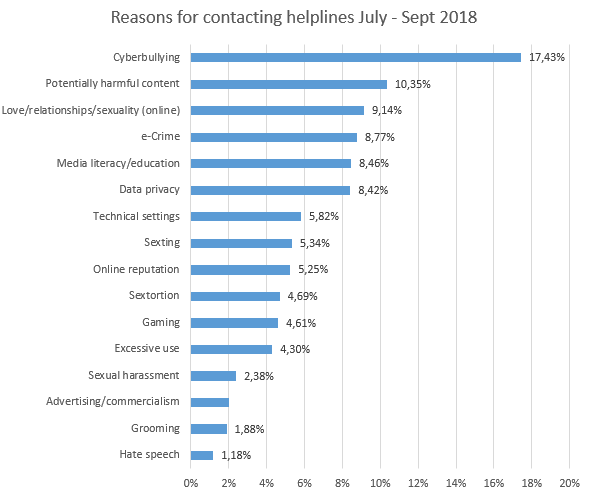 A parent's guide to Fortnite

Online game Fortnite has raised great concerns among Greek parents over the past year due to the strong success of the game with children and young people.