The most recent data collection covered the period from October to December 2017 inclusive and saw 10,809 contacts which all related to online issues. This was an increase on the previous reporting period (9,695).

Once again cyberbullying remains the issue which helplines are dealing with most often with around 16 per cent of calls relating to this. There was a slight increase in contacts relating to excessive use, online reputation, and love, relationships and sexuality. Contacts concerning privacy fell by around three percentage points which may reflect a growing awareness of privacy and heightened media focus in this area. 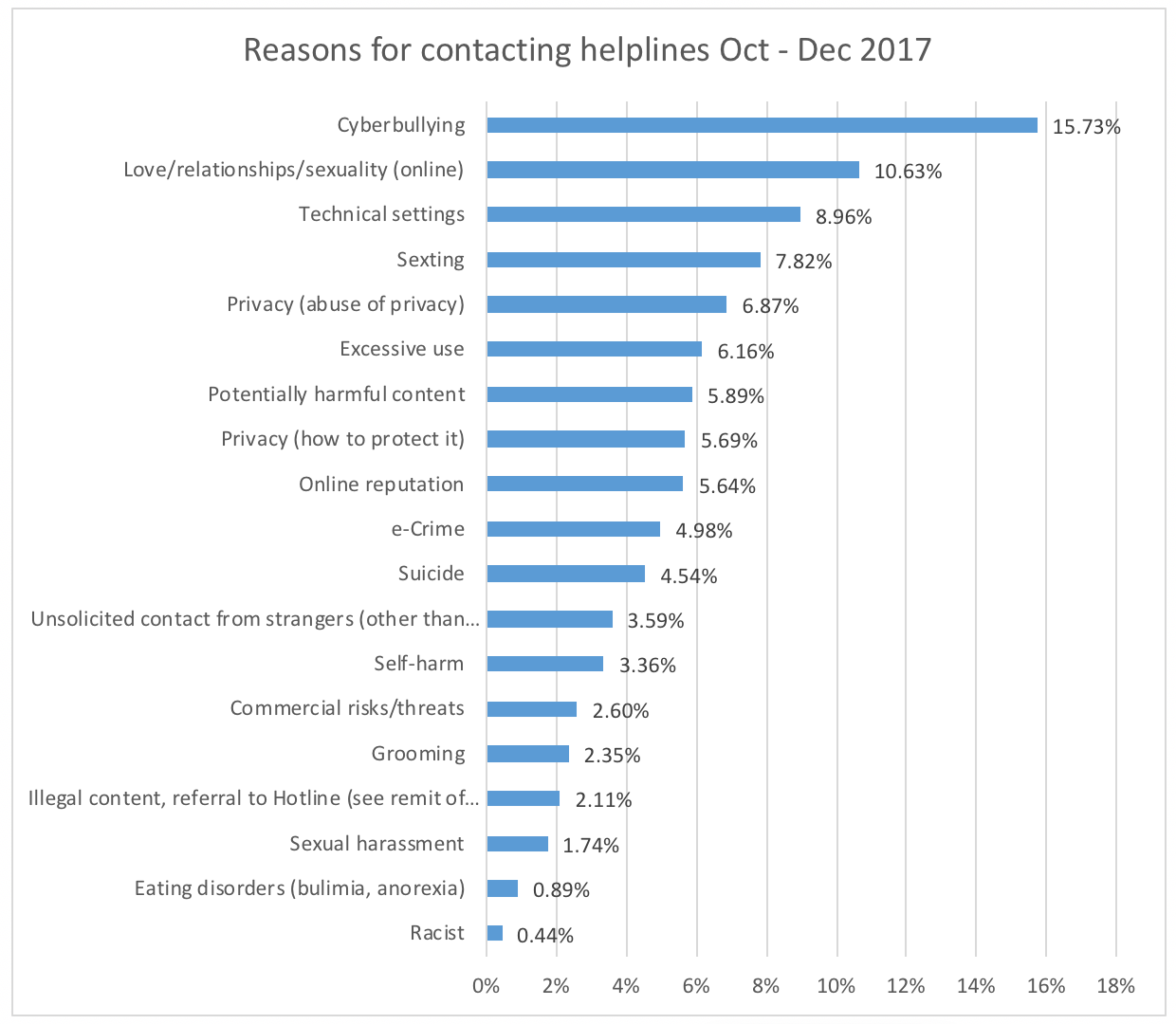 Teens were once again the group making most use of helpline services with 69 per cent of calls from this age group – representing an 11-percentage point increase on the previous reporting period. In part, it could be argued that this is as a result of improved promotion of the helpline, but it is also possibly a reflection of some of the challenges faced by children and young people when they go online. There has also been some recent research (carried out in Denmark, Hungary and the UK) which found that young people are quite unlikely to talk to parents about things that have happened to them online because they fear their reaction.

From 1 January 2018, the Insafe helpline network are using an updated set of categories to log calls. The new categories have been drawn up after extensive consultation and debate with colleagues from across the network and it is hoped that they will capture a more accurate representation of the challenges facing children and young people across Europe. New categories include hate speech, gaming, sextortion, media literacy and data privacy.

Once again, anonymous apps featured in the reports received from helplines. Unfortunately, apps like Sarahah and Sayat.me are popular as they afford young people anonymity but allow them to make comments about their friends and teachers which can quickly become very unpleasant and harmful.

Dating sites were the subject of calls to some helplines. These sites are becoming increasingly popular and there are more and more of them, catering for all different tastes and needs. Users of some of these sites have been victims of fraud, coercion and, in some cases, sexual harassment or sextortion. Callers are often very concerned about people finding out what has happened to them and the helpline can provide that vital anonymous support.

Several helplines specifically mentioned calls about excessive use, often from parents worried about the amount of time their children were spending online. The last few months have also seen a raised awareness of this type of thing in the media with some key players in the world of technology urging us to think about the amount of time we spend online and the influence that devices can have on us. Further information can be found on the Centre for Humane Technology website.

Most callers use the phone to make contact although 36 per cent are using online communications technology to ask for help.

One helpline flagged an emerging concern which they refer to as exposure. There have been a large number of cases where mainly girls from North Africa have been victims of naming and shaming. Men are posting images of these girls without scarves or wearing tight-fitting clothes and referring to them in derogatory terms. Although the images are not sexual on the whole, they can damage the reputation of the individuals.

A number of Insafe helplines and other stakeholders are joining together today in Copenhagen, Denmark, for a focus group meeting to consider emerging issues for, and effectiveness of, internet safety helplines.