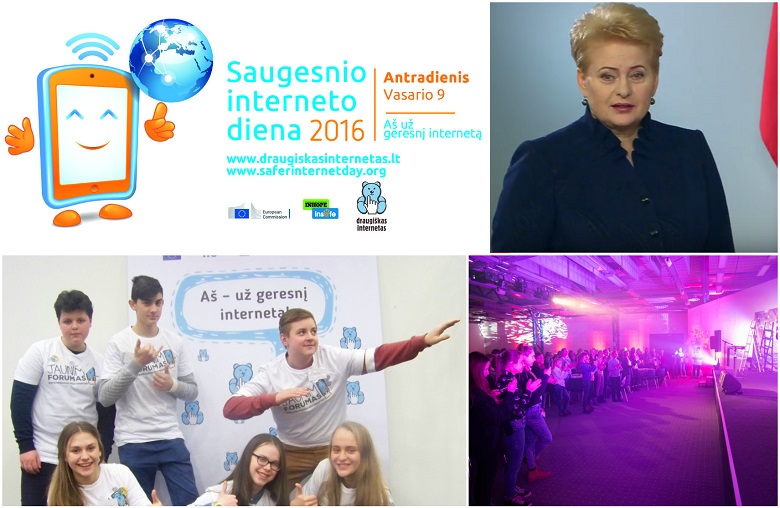 Safer Internet Day 2016 was celebrated across the globe on Tuesday, 9 February. In our round up of events and activities which took place to mark the day, we hear from the Lithuanian Safer Internet Centre (SIC) who coordinate the annual campaign in the country:

"The national Safer Internet Day (SID) event took place on 9 February 2016 at the Lithuanian national Conference Centre, LITEXPO. The event focused on 5th and 6th grade pupils and their teachers and parents. It was hosted by a Lithuanian illusionist who, with the help of magic tricks, presented the main internet safety tips and ways to avoid issues online. The children were very engaged in the content of the ‘Magical journey' lesson: the magic tricks were performed by the host of the event who presented the main virtual life issues. See a video from the SID 2016 event here.
"Another target group of the event were adults. While the pupils played the popular Lithuanian quiz ‘Children of the Millennium', representatives of the helpline and a telecommunication company hosted a parallel seminar for adults about publishing children's images online. See the video from the SID 2016 adult's session here.
"We are proud to announce that this year's Safer Internet Day received a video greeting from the President of the Republic of Lithuania, Dalia Grybauskaite. Involvement of the President made a significant impression on policy makers and the public overall. See the SID 2016 video greeting from the President of the Republic of Lithuania, Dalia Grybauskaitė here.
"One of the events organised on the occasion of SID 2016 was a round table discussion between policy makers, industry, and representatives of the Lithuanian Safer Internet Centre (SIC). The main issues discussed included the history of the project in Lithuania, its main achievements, its status and possibilities of sustainable development of the SIC in the future.
"We always try to involve Youth Panel members in our activities. During the main SID 2016 event, youth panellists took the role of reporters, accompanied by the Youth Panel Coordinator and mentored by a journalist from National Radio and Television. Youth panellists conducted interviews with the event participants, filmed video reports, and awarded the winners of the creative competition run by the Lithuanian SIC in December 2015. See the Youth Panel SID 2016 video reports here.
"All of the participants were incredibly excited and surprised by all the souvenirs on offer and the magic lesson they received about safety on the internet, while the concert given by Lithuania's X-Factor stars raised their excitement even more. Participants danced during the concert and later pupils had the opportunity to the Lithuanian pop stars for autographs.
"Safer Internet Day activities in Lithuania were organised during the entire week of 8-12 February 2016 and included:
Safer Internet Week activities in public libraries.
"The support of Lithuanian National Radio and Television increased the visibility of Safer Internet Day 2016 due to its high ratings, with one example being a quiz on internet safety on the National Television morning show ‘Labas rytas, Lietuva'. For the entire Safer Internet Week (February 8 – 12), the host of the show held a quiz about internet safety each morning, and TV viewers called the studio and answered questions. The winners were awarded with umbrellas featuring the Safer Internet Centre logos."
Find out more about the Lithuanian Safer Internet Centre here.
Visit the Lithuanian Safer Internet Centre SID profile.

Looking back at Code Week 2017 in Lithuania

This year, Code Week in Lithuania was celebrated with almost 100 events across the country. From 9-22 October 2017, events of various sizes took place at a variety of locations ranging from the national conference #SWITCH! gathering 15,000 participants with a special focus on medtech and fintech, to local events in schools of remote areas such as Utena city.

The annual national exhibition ‘Mokykla 2016' (School 2016), which took place 25-26 November 2016 in the Lithuanian Exhibition and Congress Centre (LITEXPO), was dedicated to meeting and talking with families, teachers and other stakeholders in schools' activities.

From 14-20 March 2016, the annual ‘Action Week WITHOUT BULLYING', initiated by the emotional support service Child Line (the helpline operating as part of the Lithuanian Safer Internet Centre (SIC)) took place throughout Lithuania for the seventh time.

Since the formation of the Lithuanian Safer Internet Centre (SIC), IT teachers have been very active partners, helping to spread online safety knowledge and skills to school children.

A few highlights from Safer Internet Day this year in Ireland.

Safer Internet Day 2016 was celebrated across the globe on Tuesday, 9 February. In our round up of events and activities which took place to mark the day, we hear from the Nigerian Safer Internet Day Committee which coordinates the campaign in the country: