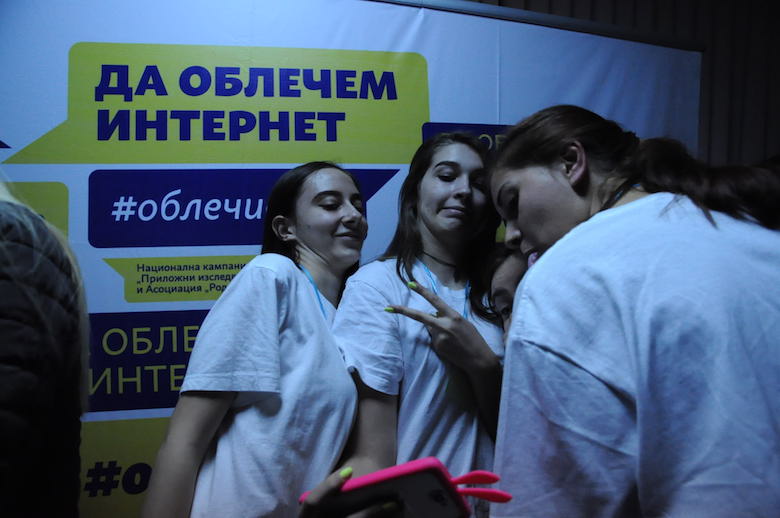 However, the desire for wider ‘approval' pushes young people looking for attention to engage in potentially risky practices, such as the sharing of sexual or revealing images online. Often even those young people who do not approve of this practice, upload similarly provocative pictures to get ‘likes' from their peers as they believe that 'everybody is doing it'.
'#облечисебе' ('Dress up!') is a campaign, developed by the Bulgarian Safer Internet Centre (SIC) in partnership with teenagers from six schools in Sofia, who came up with the hashtag campaign idea and approved the design of the campaign materials. It aims to fight the stereotype that young people can collect likes and be popular on the internet only if they upload provocative and revealing pictures.
The reasoning behind this campaign is that the risks arising from the practice of uploading sexualised images are very real for boys and girls alike:
The hashtag '#облечисебе' ('Dress up') is a way to prove that one can be cool, funny and accepted without getting undressed. The Bulgarian youth panel challenge their peers to join the campaign by dressing up in many layers of clothing, taking a selfie and publishing it on Facebook, Instagram or Twitter with the campaign hashtag.
The National campaign for counteracting contemporary methods of gender-based violence is realised with the financial aid of the Norway Grants programme.
Read more about the Bulgarian Safer Internet Centre.
Read more about Safer Internet Day celebrations in Bulgaria.

Is your teenager a hacker? Kaspersky Lab urges parents to question their teen's online habits

Research by Kaspersky Lab to mark Safer Internet Day (SID) 2016 revealed that one in ten (12 per cent) of 16 to 19 year olds in the UK know someone who has engaged in a cyber-activity that could be deemed illegal. The poll found a third (35 per cent) would be impressed if a friend hacked a bank's website and replaced the homepage with a cartoon, and a deeply worrying one in ten would be impressed if a friend hacked the air traffic control systems of a local airport.

Parenting for a Digital Future turns one