Nettivihje hotline in Finland: Fighting sexual crimes against children on the web 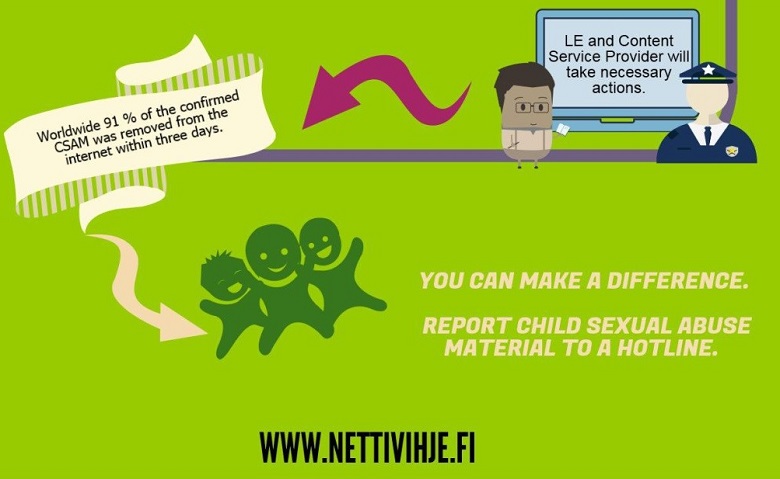 Images are gaining in importance in the social world online. The ever faster digitalisation has increased the amount and use of imagery uploaded online. For example, the number of video clips and images that children and adolescents produce using web cameras, smartphones and other mobile devices has exploded (HS 29 Nov. 2014). The rising number of sexualising videos recorded and photographs taken by adolescents themselves, and the uncontrolled dissemination of this kind of material to inappropriate or criminal use, have caused particular concern.

Criminal activity on the web is expected to grow rapidly in the future, and according to common estimates, the use of digital media tends to be connected in one way or another to sexual crimes committed against children in almost all cases. Imagery related to sexual abuse of children is disseminated and circulated using the internet, and activity related to sexual abuse of children and online grooming are estimated to have increased (European Online Grooming Project, Final Report, 2012).
Combating crime in an effective and successful manner requires that the activity is focused where crime rates have statistically increased. In the case of sexual abuse of children, this means paying particular attention to children and adolescents when developing cyber safety and preventing crimes.
Gathering information on sexual abuse of children
Save the Children Finland is an important player in protecting children in digital media. Through education and media training, it improves children and adolescents' understanding of safe behaviour on the web as well as that of the professionals who work with children. The organisation also maintains a web-based hotline that aims at promoting and speeding up the removal from the web of illegal sexual material depicting children. A new activity is a preventive self-help website at otanvastuun.fi for people sexually attracted to children and illegal imagery of children.
The Finnish hotline Nettivihje is a part of the international INHOPE network that coordinates more than 50 hotline units in 45 countries. Globally, over 170 imagery analysts work for the hotlines in the network.
Hotline units are web-based services that allow any web user to report online imagery or activity related to sexual abuse of children. Any image or activity that is suspected to be illegal can be reported anonymously. Nettivihje is not a state authority, which is believed to make it easier for anyone to report illegal imagery or activity.
The work at Nettivihje hotline consists of daily assessment, classification and analysis of the tips using state-of-the-art technology and systems that fulfil international criteria. All the analysts processing the tips have received special training for the work. The laws of Finland are strictly adhered to in processing the tips. In addition, the principles and common working policies of the INHOPE network provide guidelines for the work.
The Finnish hotline Nettivihje passes on the information on any materials and activities it assesses to be illegal to the National Bureau of Investigation of Finland so that appropriate measures can be taken, if necessary. There is a fast-track process in place for tips that are assessed to concern illegal materials or activity and that are connected to Finland. The collaboration with the police has been in place for 13 years, and relaying the information has been established as a practical and efficient solution.
Information about materials that are suspected to be illegal is also communicated to the international network using the new IC-CAM system. This enables the country in question to take further measures to rapidly remove the material. According to the most recent statistics, the analysts of the hotline network processed over a million tips in 2014. Information on all the tips that contained sexual material depicting children was passed on to the authorities. In 2014, around 90,000 images and video clips depicting sexual abuse of children that were proven illegal were passed on to the authorities, and about 90 per cent of this material was removed from the internet within three days on average. (INHOPE, Annual Report, 2014)
Fighting crime according to the victims' directive
Sexual abuse of children online is an ever-growing form of criminal activity, and an extensive national and international collaboration (between organisations, authorities and service providers) has generally been assessed to be the most effective means of fighting this type of crime. The EU directive (2011/93/EU) on combating the sexual abuse and sexual exploitation of children and child pornography requires the member states to combat sexual crimes committed against children and to reinforce the protection and assistance of the victims of such crimes. In addition, the directive also includes special provisions regarding, for example, child pornography online.
Hotline activity such as Nettivihje is a strongly preventive type of activity that reduces both the dissemination, and downloading and use of illegal material. Sexual abuse in childhood increases the risk of the victim being sexually abused later in adolescence or as an adult. While sexual abuse experienced as a child alone does not predict recurrence, the risk of being abused again later in life is considerable. The Nettivihje hotline has a crucial role in preventing the recurrence of abuse in particular.
Active participation as a means of combating crime
Sexual crimes committed online involve several legislative challenges as well as challenges related to child welfare and combating crime that must be taken into account. For over ten years, Nettivihje has actively provided high-quality education and instruction as well as collaborated with the authorities by passing on information rapidly, which has contributed to the prevention and combating of sexual crimes committed against children online, making this work more efficient. When illegal sexual material depicting children is removed from the web rapidly, it immediately reduces the use, global circulation, dissemination and downloading of the images for private use.
Combating sexual abuse of children online is extremely challenging. It requires diversified measures ranging from the activity of individual citizens to wider international activity of the authorities. The number of tips the Finnish hotline Nettivihje receives is based solely on the activity of and measures taken by the citizens in situations where they suspect that online materials or activities may be related to sexual abuse of children. The Save the Children hotline is an excellent example of measures that an individual can take in combating crime. The seamless network includes both individual citizens and international collaboration of the authorities across borders. 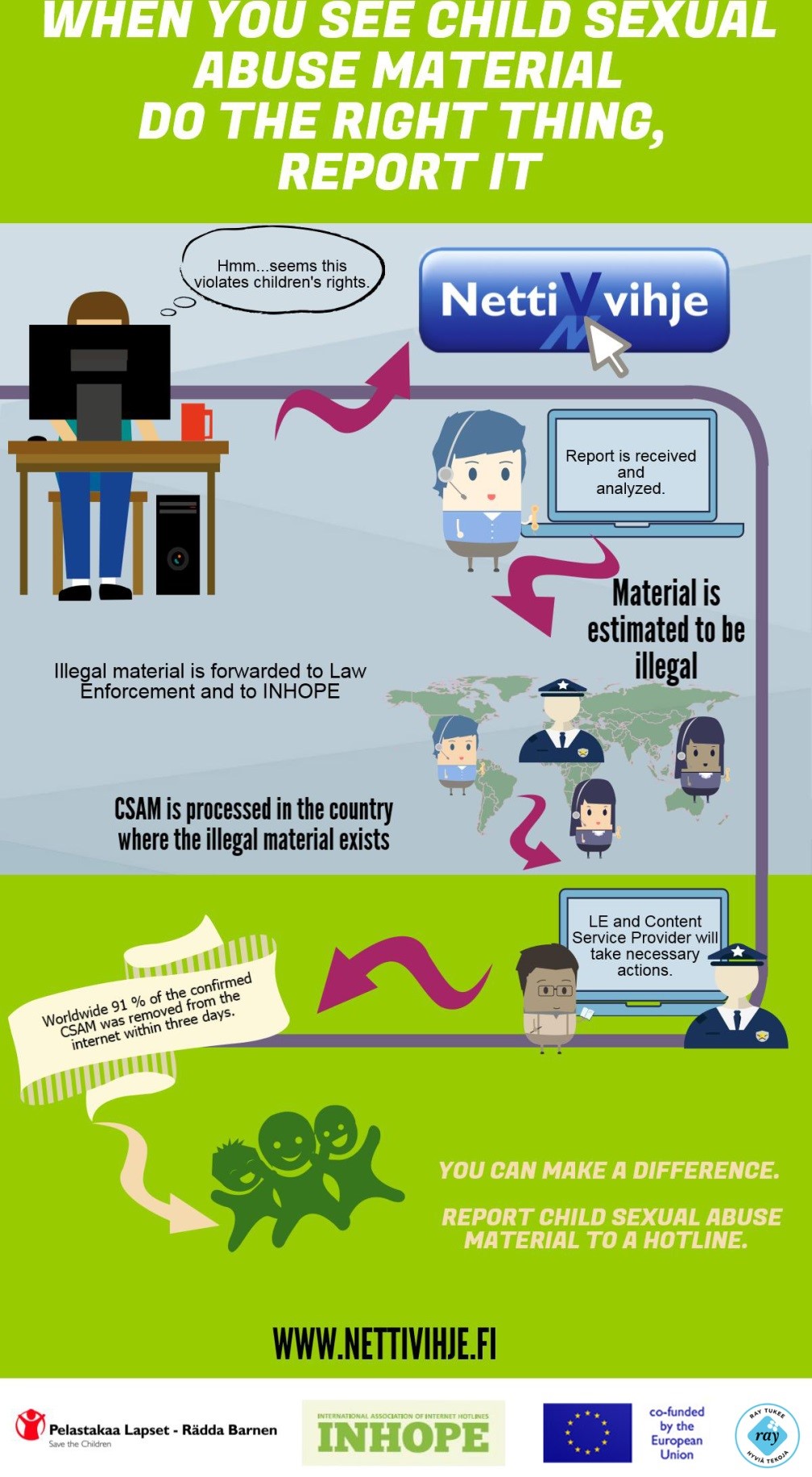 BeSafeOnline – How to protect children and adolescents

Advisors of Save the Children Finland have, in their work, come across a phenomenon in which suggestive images taken by and of children and adolescents have spread uncontrollably over the internet and ended up in inappropriate or criminal use. This phenomenon is also recognised by the police. Save the Children Finland set out to work in collaboration with the National Bureau of Investigation (NBI) to protect children in digital media.

Save the Children Finland, the hotline partner of the Finnish Safer Internet Centre (SIC), strongly supported the recent European Day on the Protection of Children against Sexual Exploitation and Abuse, an annual event which takes place on 18 November.

In the fight against online child sexual abuse, "jokainen vihje on tärkeä", every report counts, as they say in Finnish. Nettivihje has been in operation since 2002 and offers the public a way to report potential illegal online content, especially concerning child sexual abuse material (CSAM). Reports can be made anonymously.

Taking the power seat - internet in the hands of new generations

In this article, Tommi Tossavainen, Planning Officer at the Finnish Safer Internet Centre, provides his views on the rights of young people online, including the possible impact of the new EU General Data Protection Regulation.

Native in learning and knowing

In this article, Saara Salomaa from National Audiovisual Institute, part of the Finnish Safer Internet Centre, shares her views on the concept of digital natives.