Safer Internet Day in Poland – The power of local involvement

February is a very busy month for online safety organisations in Poland. In 2020, as in previous years, the main SID conference in Warsaw marked the beginning of a month of awareness raising around SID in the country. For this event, the Polish Safer Internet Centre (SIC) decided to go big and invited to Palladium Theatre almost 700 participants, which made the SID 2020 conference one of the biggest events on children's online safety in Poland. 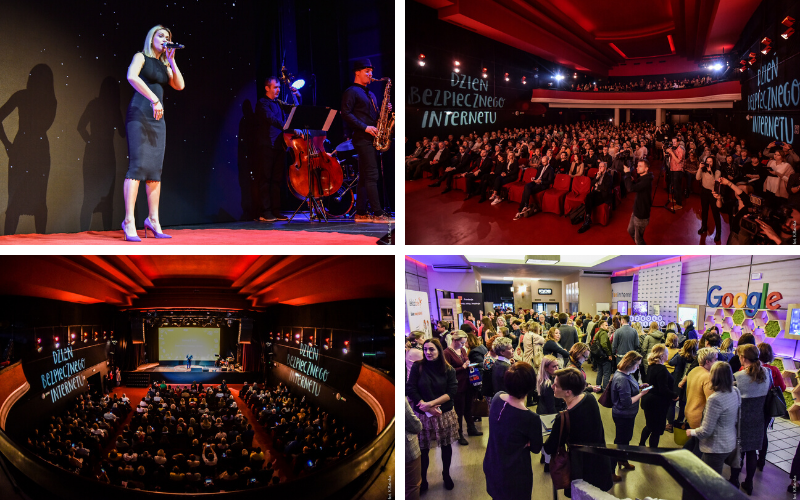 "Safer Internet Day is a good opportunity to share knowledge and good practices, so the Polish SIC invited representatives of organisations and institutions from the fields of media education and prevention of risks to children and adolescents to speak during the conference. The goal was to initiate actions but also to reflect on the needs of young people in light of the development of new technologies, on the role of parents, school education in this respect and the need to find effective systemic solutions in this area" says Szymon Wójcik of the Empowering Children Foundation.

Marek Zagórski, Polish Minister of Digital Affairs, gave the welcome speech. He was followed by eight TEDx-style presentations from recognised experts in the field of online safety and new technologies in Poland. The subjects taken up by the speakers included the use of digital technologies in the educational process, online peer violence motivated by gender stereotypes and prejudices, as well as new online phenomena such as online influencers and their impact on children and young people. During the conference, participants also discussed the rules of using screen devices at home that can support parents in using screens without harm (and even with benefits) for the child and the whole family.

The conference was live streamed to enable more people to participate. The video recordings of the conference's speakers are available on the Polish SIC's YouTube channel.

Local initiatives – the strength of the Polish SID

The main element of Safer Internet Day celebrations in Poland were local initiatives for the protection of young internet users. As in previous years, the organisers invited educational and cultural institutions – schools, libraries, community centres, as well as companies and individuals, to participate. This year, no less than 4,600 such initiatives were submitted (the biggest number ever), in which over 870,000 children, young people and teachers took part. Ideas could be submitted until the end of February at www.dbi.pl, which is the landing page for SID celebrations in Poland. This year 15 educational, programmable Photon robots funded by Orange Foundation - the main partner of SID in Poland, were awarded as prizes to the most innovative local actions.

"We encourage everybody throughout the country to act and join the initiatives. Each year, we note growing interest in SID. We are very pleased with that, all the more so that the idea of this day is to cooperate in promoting online safety, both at international and local levels" says Julia Piechna, the coordinator of Polish SIC at NASK. "Together for a better internet! – the central motto of this year's celebration draws our attention to the heart of the cooperation between different sectors in supporting positive changes on the internet, but also reminds us of the need to involve the family, that is to say the child's immediate environment" she adds.

The main partner of SID 2020 was the Orange Foundation. The partners of this year's edition were Facebook Poland and Google Poland. The SID was organised under the honorary patronages of the Ministry of Digital Affairs, the Ministry of National Education, the Commissioner for Human Rights, the Polish General Police Headquarters and the Office of Electronic Communications.

For further information on Safer Internet Day 2020 in Poland, visit the dbi.pl website.

The Polish Safer Internet Centre has published a number of articles (in Polish) on staying safe online during the COVID-19 pandemic. Below you can find them organised by topic.