On Tuesday, 11 February 2020, Europol marked Safer Internet Day by organising its third European Youth Day, for which 150 students were invited to the organisation's headquarters.

The event was well received by both students and teachers, who were able to learn about online safety in a fun way, but also by the partners, who got a chance to educate youngsters on their cybersecurity skills and to raise awareness of cybersecurity concerns. 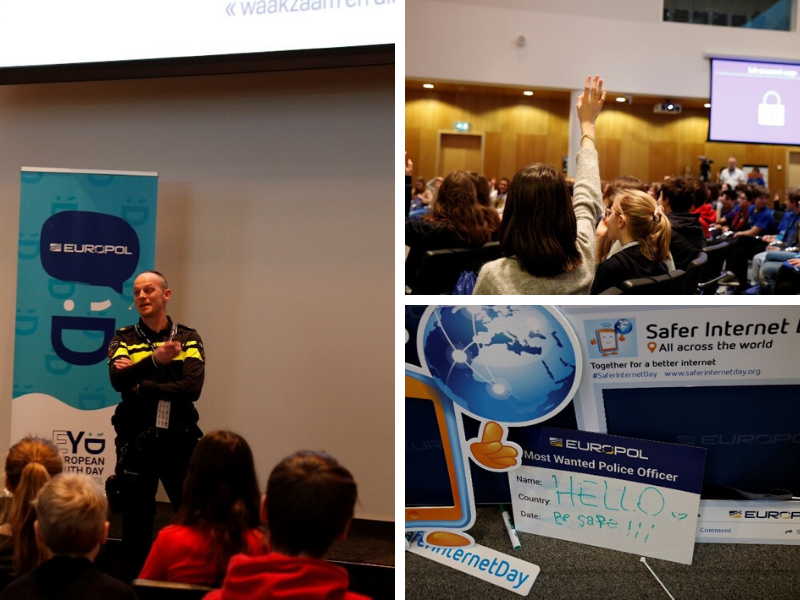 So, how did Europol do it? It all started in October 2019, when they met a smaller group of 19 pupils and asked for their opinion on having such an initiative hosted at Europol. The idea was to organise an event for children, by children. The group provided organisers with simple instructions: "we want an interactive event, where we can learn about online security without feeling lectured in the typical do's and don'ts".

Five months later, Europol delivered. The event in February included presentations, masterclasses and workshops: hands-on experiences where they could hack devices in a controlled environment, learn about the importance of online privacy with magic tricks, jump into a police officer's shoes and follow clues or help two forensic cyber specialists crack a case. Pupils could make the most of a cyber escape room, where they had to find a crime suspect, a CSI experience where they played the part of a cyber squad to help cyber forensic specialists solve an investigation, and think like a chief information security officer (CISO), coming up with a plan to protect their company from cyber threats.

What's next? Europol is currently collecting the feedback from the schools and evaluating their opinion on the event, as lessons learned for similar activities. They will continue to stay in touch with the youth, allowing them to provide advice on such future initiatives and making them an active part of the discussion. One thing is clear: kids are gaining access to technology at younger ages and it is our duty to make sure that they stay safe while accessing the online world. Perhaps one of the best ways to do so is through prevention and awareness – providing them with the tools and knowledge needed in order to protect themselves and, eventually, grow up into a cyber aware generation.

For more information, visit the website and the Safer Internet Day Supporter profile page of Europol.

For the 2020 edition of Safer Internet Day (SID), the Dutch Safer Internet Centre (SIC) relied more importantly on collaboration with partner organisations, resulting in two main events: the European Youth Day with Europol and the Dutch helpline; and the official launch of new lesson material with Google and one of the SIC's partners. The Dutch SIC also published a press release on a research they conducted, looking at the way parents and children react in case of online emergency.