The new school year is well underway in many parts of the world, and parents may be inclined to share news and photos of their star pupil's success or involvement in new activities. Before you do, however, know that teens around the world say parents share (or "sharent") too much about them on social media – so much so that it's become a concern for more than four in 10.

42 percent of teenagers in 25 countries (1) say they have a problem with their parents posting about them on social media. Of that sum, 11 per cent say it's a big problem; 14 per cent say it's of medium concern, and 17 per cent consider it a small issue – all according to preliminary results of a new Microsoft study about the state of digital civility today. In addition, two-thirds (66 per cent) of teens say they've fallen victim to at least one online risk at some point, with the same percentage worried that a similar negative online experience will happen to them again. 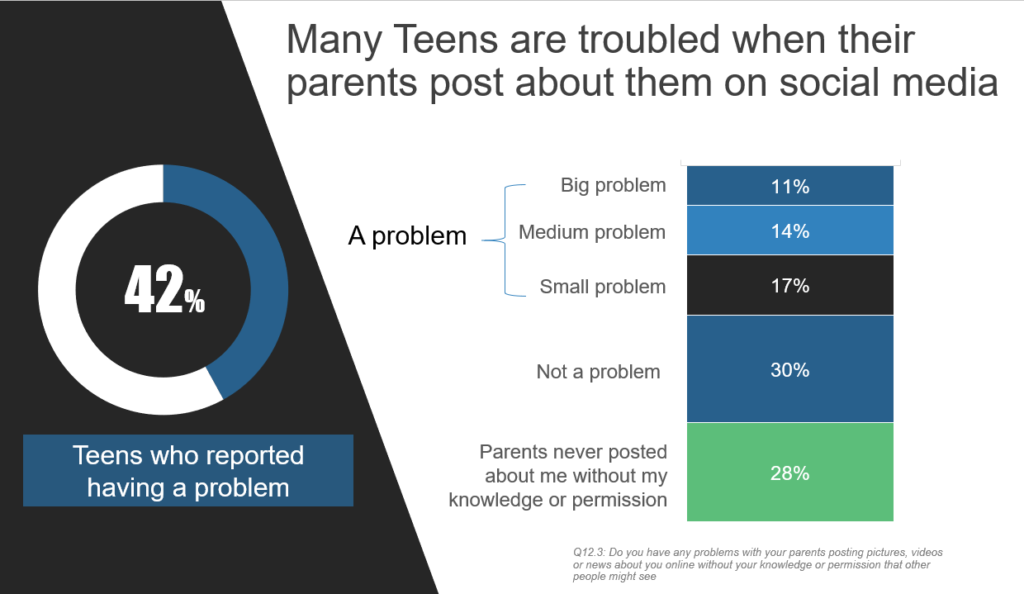 The findings are from Microsoft's latest research into aspects of digital civility — encouraging safer, healthier and more respectful online interactions among all people. The study, "Civility, Safety and Interaction Online — 2019," polled teens aged 13-17 and adults aged 18-74 about their exposure to 21 (2) different online risks. This latest research builds on similar studies between 2016 and 2018.

The previous years' projects polled the same demographic groups in 14, 22 and 23 countries, respectively. A total of 12,520 individuals participated in the 2019 study, and Microsoft has surveyed more than 44,000 people over four years. Full results from this latest poll will be made available on Tuesday, 11 February 2020, for Safer Internet Day.

While this research didn't explore any direct correlation between parents' online behaviours and young people's potential risk exposure, both academic researchers and financial experts have warned that such sharing puts children's online privacy and potentially their physical safety at risk.

To share or not to share is an individual family's decision, but if the choice is to share, parents should be attentive, exercise discretion and not inadvertently reveal too much, including children's real full names, ages, dates of births, home addresses, mothers' maiden names, favourite sports teams, names of pets and photos, to cite a few examples. On one hand, these individual tidbits of personally identifiable information can be misused in online social engineering schemes, culled together to make children and other young people the targets of online fraud or identity theft, or in extreme cases may even lead to online grooming. Indeed, young children and infants in particular are prime targets for credit fraud. If someone were to take out a line of credit in a child's name, odds are the child wouldn't discover it for more than a decade later – until they applied for their own credit cards or other loans. Meanwhile, online grooming takes place when someone builds an emotional connection with a child in order to gain the child's trust for sexual exploitation or abuse, or recruitment to terrorist or extremist causes.

"Share with care" should be everyone's mantra both online and off. For more on protecting your family's online privacy, visit Microsoft's digital safety resources page and see this factsheet. To learn how to stay alert to online grooming, see this link.

Teens continue to look to parents for help

In keeping with a trend identified in last year's results, in 2019 teens continued to turn to their parents and other trusted adults for help with online issues. After jumping an impressive 32 percentage points from year two to year three, nearly half (48 per cent) of teens surveyed this year said they'd reached out to a parent about concerns over online activities. That's up another 6 percentage points from 2018. Just two years ago, fewer than 10 per cent of teens said they had turned to an adult for help with online risks.

In addition, when asked about the best role models for civil and respectful behaviour online, teens overwhelmingly pointed to parents (80 per cent), followed by teachers at a distant second (49 per cent), and other adults, athletes and celebrities at 22 per cent, 17 per cent and 15 per cent, respectively.

That's why Microsoft continues to encourage adults to:

This year, Microsoft added three countries to the study – Indonesia, The Netherlands and Poland, and maintained all 22 countries from the 2018 report. When full results are made available in February, they'll also release the latest reading of the Microsoft Digital Civility Index, as well as results of what respondents anticipate and hope for in terms of digital civility and life online in the coming 2020s decade.

Microsoft will post at least one additional early look at some of the study's key findings in the weeks ahead. In the meantime, to learn more about digital civility and how you can become a champion for common-sense online behaviours, visit www.microsoft.com/digitalcivility. For more on digital safety generally, visit their website; "like" Microsoft on Facebook and follow them on Twitter.

For Safer Internet Day 2019, Microsoft released a new research showing that people around the world, and in particular in the United States, Germany, France and Belgium, are reportedly experiencing increased levels of online civility.

In July 2018, Microsoft concluded its inaugural Council for Digital Good, an initiative involving 15 teens from 12 US states, selected to help advance Microsoft's work in digital civility: promoting safer and healthier online interactions among all people. Six months later, Microsoft shares what these impressive young people have done since their council term ended, as well as their planned activities for Safer Internet Day 2019.