On Thursday, 21 November 2019, the Safer Internet Forum (SIF) took place in Brussels, Belgium. With a theme of "From online violence to digital respect", it also celebrated 20 years of safer/better internet funding by the European Commission. Below, read the summary of a deep dive session on the issue of sexual violence against men and boys, led by Nick Dunne, Psychosexual Therapist at Brook.

Nick Dunne introduced Brook – a UK charity giving sexual health and relationship advice to young people under the age of 25. Brook also has free and confidential clinics, provides online information, carries out relationship and sex education in schools across the UK and in Europe, and trains professionals in these issues.

Nick Dunne began the session by making a group agreement: "respect each other", "listen to each other as well as each other's opinions", "avoid jargon", "ensure confidentiality", "ask questions when needed", and "participate as fully as you are able to". The learning outcomes of the session were to understand forms of child sexual abuse/exploitation (CSA/E) and how these apply to BYM (boys and young men); to take a closer look at online sexual violence and explore the vulnerabilities of boys and young men in relation to CSA/E; to understand the impact of gender in the grooming process and identify the barriers to disclose; and to gain knowledge to safeguard BYM in participants' own environments.

The World Health Organisation (WHO) defines sexual health as "a state of complete physical, mental and social wellbeing, and not merely the absence of disease or infirmity". Sexual health requires a positive and respectful approach to sexuality and sexual relationships, as well as the possibility of having pleasurable, safe sexual experiences, free of coercion, discrimination and violence.

Nick Dunne initiative an activity in which participants had to split into groups, with each group receiving three different scenarios. The groups had to respond to the question: "How at risk do you think these young people are based on the information presented?", evaluating the risk on a scale of 1 to 10 (10 being the highest risk).

The examples shown were real-life cases. For example, Freddy, aged 17, was introduced to heroin by a girl he was often seen with. However, the police saw him as the negative influence. When making judgements on risk we need to carefully consider our response to ensure we are complying with the Equality Act 2010. Nick Dunne insisted on the fact that we need to respond equally and not respond to boys less than to girls. He mentioned the example of a case he worked on – a babysitter who pleaded guilty of sexual activity with the child she was baby-sitting (aged 11) and of online grooming. She received a six-month suspended sentence, two-year supervision order and sex offender registration for seven years. Would a man have got the same sentence?

Sexual abuse is any sexual activity with a child. One thing to be aware of is that many children and young people who are victims of sexual abuse do not recognise themselves as such. A child may not understand what is happening and may not even understand that it is wrong. Sexual abuse may involve non-contact activities.

According to a study conducted in the framework of the deShame project, the top five barriers to seeking help for young people are:

There is more risk to LGBTQI people because they are less likely to talk about it; explaining a case of grooming implies explaining that they are gay and often their parents do not know it.

Child sexual exploitation (CSE) is a form of sexual abuse where children are sexually exploited for money, power or status. The exploitative element can be financial gain, discharge of "debt", free tickets/gifts, access to parties, shelter, protection, love, and so on. When it comes to boys and young men being groomed, the groomer may use their gender to their advantage, for example by access in a changing room, or through online gaming. The groomer may use the boys' masculinity and reinforce negative male stereotypes ("be the big man"). The groomer may also use boys' inexperience or confusion regarding sexuality ("prove their sexuality"). Touch can be used in a much more manipulative way with boys. Moreover, sending topless male photos could seem harmless. There are different models of CSE: online; peer on peer; abuse of a position of trust; party model; boyfriend/girlfriend model; gangs/organised network, and trafficking/county lines.

Although technology can be a positive for many children and young people, it can also pose potential real dangers. Technology often plays a key role in the grooming of young people, whether this is via their phones or social media. Below is a mosaic of the various social media apps where cases of grooming have been reported. 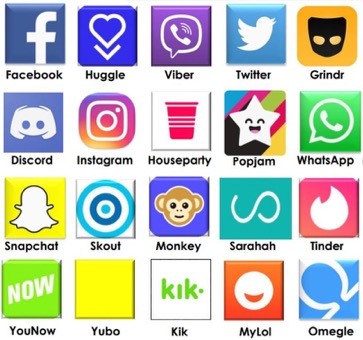 Groomers online often target males via interactive gaming, such as Xbox Live, FIFA or World of Warcraft. Online dating apps can facilitate age-inappropriate contact with people seeking sexual interactions. Snapchat can reveal your exact location and allow the user to send images that "disappear". NetAware is a website where you can look for information about the risk of different apps and how they work.

A 2017 Brook online survey showed that significantly more gay young people (9.9 per cent) had met up with an online contact who was not who they said they were, compared to straight young people (4.9 per cent). Nick Dunne therefore also discussed some less-known gay dating apps such as Squirt, Scruff, Wapo, GUY SPY, and Jack'd.

He then moved onto the topics of sextortion and webcam blackmail. Child sex abusers use the internet in many ways, in that regard. It can be to swap child abuse images in chat areas or through instant messenger with other adults or young people. It can also be used to target and build mutual trust with young males. They also form networks with other child abusers to share tips on how to groom more effectively and how to avoid being caught. It can be to swap personal information about children that they have collected. They also participate in online communities such as blogs, forums and chatrooms to groom children (for images and sex). They also target vulnerable single mothers to gain access to their children.

Nick Dunne then presented the Child Exploitation and Online Protection Centre (CEOP) – which operates across the UK to tackle child sex abuse and provide advice for parents, young people and children, and the Internet Watch Foundation (IWF) – which works internationally to make the internet safer by removing images of child sexual abuse. Some of the things children and young people have reported to the CEOP include: "Someone online has asked me to send them nude images", "I shared a nude image with someone online and they are threatening me", "I did something that I was embarrassed about on webcam and someone has turned nasty towards me", "Someone I don't know is asking me to live-stream and do things I don't want to do", "Someone online kept asking me to meet them face to face and I feel pressured by them", "Someone online was talking to me about sex and it made me feel uncomfortable", "Someone online is putting pressure on me to do things I don't want to do", and "Someone I met in an online game keeps trying to talk to me privately".

There are five stages to online grooming: friendship, forming a relationship, risk assessment, exclusivity, and sexual images/meet, which Nick Dunne introduced to the participants using a case example.

Nick Dunne then introduced ThinkUknow (www.thinkuknow.co.uk), an educational initiative from CEOP. Access to the resources is free upon sign up, and the materials can be used with all age ranges of young people

He then moved on to the topic of gender, and especially the related barriers to disclosure. Males do not perceive themselves as being vulnerable or at risk and believe females are more at risk. They believe perpetrators are more interested in females, and they believe they are tough and can look after themselves. There is also the fear of "getting in trouble" if they are also involved in illegal activities. Besides, being the victim of rape and sexual assault is not considered a very masculine thing to admit by some of them.

When it comes to actually tackling sexual exploitation or abuse, Nick Dunne also suggested a variety of avenues for action:

Nick Dunne presented the #WeSeeYou campaign, aiming to raise awareness about male sexual abuse and assault. It is a campaign aimed at acknowledging male victims/survivors and letting them know that they are not alone. He also introduced the Sexual Behaviours Traffic Light Tool developed by Brook – by identifying sexual behaviours as green, amber or red, professionals across different agencies can work to the same criteria when making decisions and hence protect children and young people with a unified approach.

Nick Dunne advised participants on how to appropriately respond to young people. One should listen and take complaints seriously; record and report; take every opportunity to educate; preserve confidentiality at all costs; and pay attention to incidents online.

He pointed participants to free resources for professionals on ThinkUKnow, as well as to the Brook e-learning platform.

On Thursday, 21 November 2019, the Safer Internet Forum (SIF) took place in Brussels, Belgium. With a theme of "From online violence to digital respect", it also celebrated 20 years of safer/better internet funding by the European Commission. Below, read the summary of a deep dive session on using Artificial Intelligence (AI) as a solution, led by Julie Dawson, Director of Regulatory and Policy at Yoti, and Milan Zubicek, Government Affairs and Public Policy Manager at Google.

On Thursday, 21 November 2019, the Safer Internet Forum (SIF) took place in Brussels, Belgium. With a theme of "From online violence to digital respect", it also celebrated 20 years of safer/better internet funding by the European Commission. Below, read the summary of the keynote session led by Thordis Elva, Icelandic writer, speaker and journalist.