The Insafe network held a day 0 event at the Internet Governance Forum (IGF) in Berlin, taking place from Monday, 25 to Friday, 29 November 2019.  The workshop was entitled "How is life in the digital age treating us? Opportunities and risks for people's wellbeing".

Several representatives of Safer Internet Centres (SICs) from the Insafe network were part of the panel – the Greek SIC was represented by Evangelia Daskalaki, the Maltese Hotline and Helpline were represented by Deborah Vassallo, and the Portuguese SIC was represented by Sofia Rosgado. Sabrina Vorbau from the Insafe Coordination Team moderated the session, and also gave a general introduction to the Insafe network, including the work of the hotlines and helplines. In addition, a group of young people from Italy, Portugal, Germany and Greece took part in the panel to share their opinions on the topics discussed in the session.

The session was divided in four parts. After an introduction of the Insafe network, there were presentations of digital footprint and digital identity; as well as on digital inclusion. After this, the young people present were asked to give their feedback on the three different topics. A Q&A session then followed.

The workshop kicked off with a presentation on digital footprint by Evangelia Daskalaki from the Greek SIC. She explained how more data is being collected from children than ever before. This is in part due to the fact that parents themselves are sharing a lot of information about their children. In addition, young people are constantly using technological devices, through which they share a lot of information about themselves. This increased exposure could lead to certain risks, such as cyberbullying or unwanted contact ("stranger danger") – but it can also more indirect consequences, such as profiling or targeted marketing.

In her presentation on identity formation, Deborah Vassallo from the Maltese Hotline and Helpline explained how peer relationships become far more significant during adolescence. Teenagers' friendships also become increasingly intimate; they share more and more of their inner feelings and secrets, and are more knowledgeable about other's feelings. Loyalty and faithfulness become more valued characterisics of friendship. This is even more evident when we talk about social media: this constant need to be part of the group and to be acknowledged, will eventually form your self concept and your self identity. Social media encourages users to be selective in the information they share, resulting in others viewing only specific aspects or "snippets" of their lives. Although this can be empowering for young people, the freedom to tailor the information they share comes at a cost. For example, the "selfie" of a girl posing with her group of friends may have been edited several times before being posted on Instagram; and the Snapchat story a boy shared failed to take into account that he had actually spent several hours that day worrying about an upcoming exam. This kind of self-selecting information leads others to develop a distorted perception of reality, and as a consequence, young people compare themselves to an unrealistic "ideal". This may then lead to low self-esteem and an over-reliance on social media as a way to seek reassurance and validation, for instance in the form of receiving likes, comments and shares. 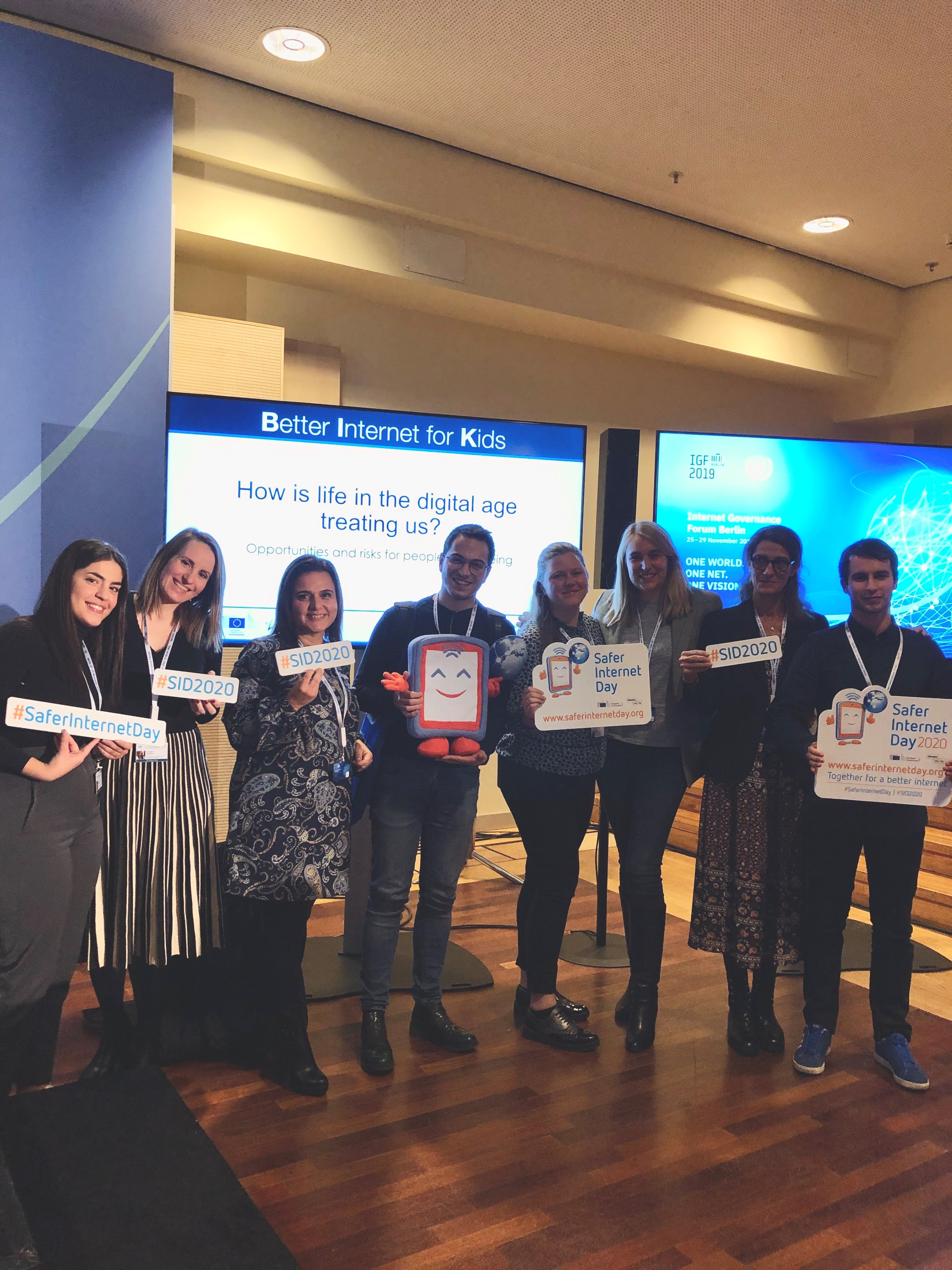 During her presentation on digital inclusion, Sofia Rosgado from the Portuguese SIC outlined a national programme on the topic, called INcode 2030. It is part of a bigger initiative on citizenship and inclusion in a society with increasingly more digital practices, where many social interactions happen on the internet. The Portuguese national initiative has a broad scope in this drive towards digital development, starting with the promotion of digital inclusion and literacy; educating the young generations from an early age; equipping the older generation with digital skills; and offering its graduates specialisations for advanced digital jobs.

When asked about the digital footprint and what role they think it plays in their everyday lives, the young people present in the panel mentioned that nowadays, young people are moving from one social media platform to another rather frequently.  One young person mentioned that while she was checking her Facebook profile, she felt embarrassed about some pictures she had uploaded some time back and she was worried about who might have seen them. There was an unanimity that nowadays, media literacy should be included in the school curriculum. Indeed, although many schools have already incorporated it as a subject, there are still many who did not. A young man mentioned that his main purpose for using social media is to socialise, but he makes sure not to post pictures of himself and his family as he would like to protect his younger sisters.

The young participants were then asked whether they feel the need to constantly keep their profiles updated and whether they constantly crave feedback from their followers on social media.  One young person mentioned that social media platforms such as Instagram where you can follow influencers who are constantly posting perfect pictures of themselves put plenty of pressure on young people because they would want to create the same type of posts.  Thus, it is everyone's responsibility to pay attention to what is being shared online and how it can be perceived, especially by the younger generation. Another young person mentioned that once she installed an application to monitor her screen time, she realised that she was spending more than 30 hours online in a week. She was shocked about this and when she discussed the topic with her friends, they realized they were all in the same situation. Therefore, they decided to provide support to one another and try to decrease their screen time together. It was a very successful exercise and the peer-to-peer support was crucial in making it possible. A final comment from the floor was that digital literacy and computer skills need to be provided, not only to young people, but to the whole community to reach the utmost results. The internet is in constant evolution and things happen too fast to stay on top of the new trends and opportunities that it provides, hence the importance of keeping an online/offline balance.

On Thursday, 28 November 2019, the Insafe network hosted a workshop at the annual Internet Governance Forum (IGF) in Berlin, in cooperation with the Federal Ministry of Justice and Consumer Protection of Germany, on the topic of online hate speech. During the session, around 90 participants and high-level speakers discussed what more can be done to tackle hate speech online.

Between November 2019 and December 2020, the Italian Safer Internet Centre (SIC) will run seven educational and awareness-raising seminars targeted to youth professionals (social workers, paediatricians, psychologists and teachers, as well as all those professionals involved in child protection issues).

Monday, 25 November 2019 marks the start of the Internet Governance Forum (IGF) in Berlin, Germany. This year, an Insafe delegation will host two workshops; one on opportunities and risks of digital technologies for people's wellbeing and one on hate speech.

The 13th Internet Governance Forum (IGF) took place from 12-14 November 2018 in Paris, France. This year the conference ran under the overall theme of "The Internet of Trust".