"No to harassment" – A French national plan of action against cyberbullying

The sixth edition of the French "No to harassment" prize – a competition open to students aged 8-18 – took place on Monday, 3 June 2019, and was organised by the Ministry of Education with the support of the main partners of digital education in France. This nationwide initiative aims to improve the school climate in France by establishing a truly national approach to the fight against bullying.

The fight against (online) harassment: a national priority

The winners were rewarded for their awareness projects, in the presence of Minister of National Education Jean-Michel Blanquer and French First Lady Brigitte Macron. The French Safer Internet Centre (SIC) has been committed to the fight online harassment for years and is honoured to have been part of the national jury that elected ten laureates from all over France.

Launched in 2013 as part of a set of public policy measures encouraging greater awareness of bullying, this award recognises the best communication media against harassment. The 2019 edition saw massive mobilisation, with more than 40,720 students and 1,900 schools participating. Thus, 1,330 projects were rewarded, including 670 posters and 668 videos.

The announcement of the competition's results was an opportunity for the Minister of National Education to present ten new measures that will be deployed from the start of the 2019/20 school year, among which: 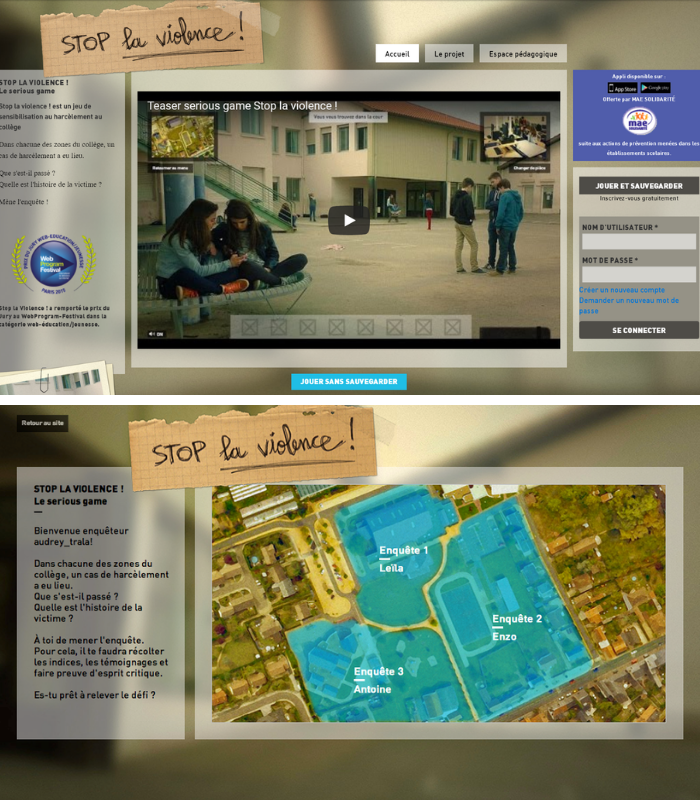 The "No to harassment" campaign fits directly within the French SIC's priority awareness objectives. The French awareness centre offers students and educators the serious game Stop la Violence that aims to educate students about the phenomenon of harassment. The game is aimed at everyone, whether they are victims, bullies or bystanders of violence.

A real tool of individual and collective mediation, the serious game "Stop la Violence" provides counter-narratives against violence. In the game, children and young people must conduct three investigations on the themes of rumour, discrimination and racketeering.

This resource teaches students how to discern the different signs of harassment and cyber-harassment by emphasising the collective dimension of the phenomenon. It highlights the different stakeholders that take part in harassment: those who participate, those who attend and remain silent. Moreover, this game allows to develop empathy for the victims, but also the bullies. Thus, in case of harassment, "Stop la Violence" allows to give action tracks and to show what the possible solutions are.

If you want to know more about "Stop la Violence" and use this resource, please visit https://www.stoplaviolence.net.

In order to introduce young people to coding and to the digital culture, the French Safer Internet Centre (SIC) produced "Code-Décode", a set of gamified educational resources.

Legislating on the use of mobile phones in schools – a French story?

The French government recently adopted, under the supervision of Minister of National Education Jean-Michel Blanquer, a law prohibiting the use of smartphones in elementary and middle schools. Below, the French Safer Internet Centre (SIC) reviews the law, its implementation, and answers some practical questions parents and teachers may have, while at the same time reflecting on the effectiveness and relevance of such a measure.

Safer Internet Day 2019 in France: "The screens, the others and myself"

In 2019, Safer Internet Day (SID) was a great opportunity for the French Safer Internet Centre (SIC) Internet Sans Crainte to renew its awareness programme, by catering to its target groups' main needs. This meant developing a campaign dedicated to collecting qualitative data on the target audience's uses of digital devices.