Sunday, 15 September 2019 marks the International Day of Democracy around the world. This 2019 edition focuses on participation – an occasion to take a closer look at young people and democratic participation in the digital age.

In 2007, the Inter-Parliamentary Union adopted the Universal Declaration on Democracy in Cairo. Since then, the International Day of Democracy is observed every 15 September to promote and uphold the principles of democracy, and review its state in the world, since, as the United Nations put it, "democracy is as much a process as a goal, and only with the full participation of and support by the international community, national governing bodies, civil society and individuals, can the ideal of democracy be made into a reality to be enjoyed by everyone, everywhere".

The theme of the 2019 edition is participation. Indeed, "true democracy is a two-way street, built on constant dialogue between civil society and the political class". This follows from the 2018 theme, which was "Democracy under strain: solutions for a changing world". Indeed, the democratic process seems to erode in many places around the world: there is a growing lack of trust in this process; more and more citizens lose interest or outwardly reject political parties; election turnout rates keep decreasing; and there is a growing feeling that power has been confiscated by an elite which is disconnected from the realities of daily life.

Therefore, this year's focus on participation, inclusion and equal treatment seems to be a solution to this phenomenon. As António Guterres, Secretary-General of the United Nations, stated, "as we mark Democracy Day, I urge all governments to respect the right to active, substantive and meaningful participation; and I salute all of you who strive tirelessly to make this happen".

When it comes to the impact of digital technologies on democracy, a quick look at the headlines will tell you that it is rather bad – from increased threats to election integrity to online disinformation. Yet, the digital age also offers unprecedented opportunities for participation to the greatest number of citizens around the world. The rise of civic tech is one striking example of the many possibilities offered for democratic participation in the digital world, as described by Pia Mancini in her TEDx Talk "How to upgrade democracy for the internet era" above. 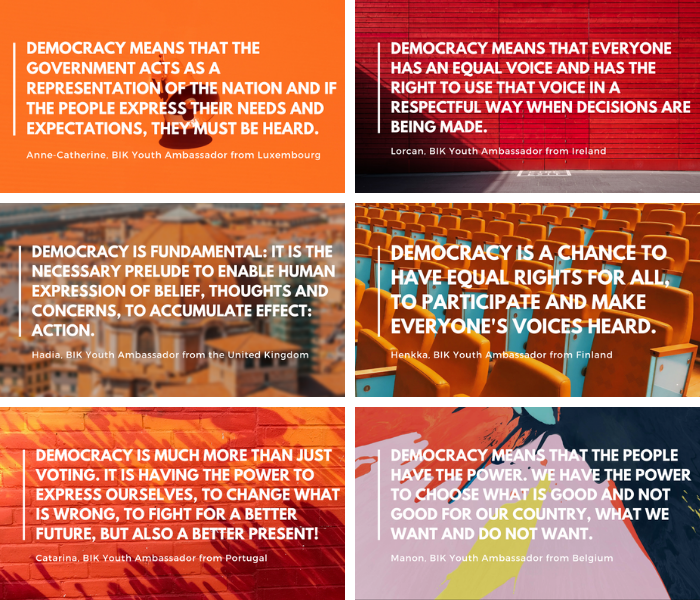 A look back at what democracy means to Better Internet for Kids (BIK) Youth Ambassadors – European Youth Week 2019 campaign "Democracy and me"
This has, in particular, implications for young people's civic engagement, as highlighted by CitizenLab. As such, civic tech has the potential to:

For more information about the International Day of Democracy, visit the United Nations' website and follow the day on social media with the hashtag #DemocracyDay.

International Day of Democracy 2018: Democracy "under great strain" according to the UN

On Saturday, 15 September we will celebrate the International Day of Democracy. The 2018 editions' theme is "Democracy under Strain: Solutions for a Changing World".

Conflict prevention for the International Day of Democracy

When it comes to democratic values, prevention has a clear role to play in promoting peace and stability in both the online and offline world. As reflected in our 2016 celebration article, the International Day of Democracy has been celebrated annually on 15 September since 2007 when the United Nations General Assembly set this date aiming to promote and uphold the principles of democracy.