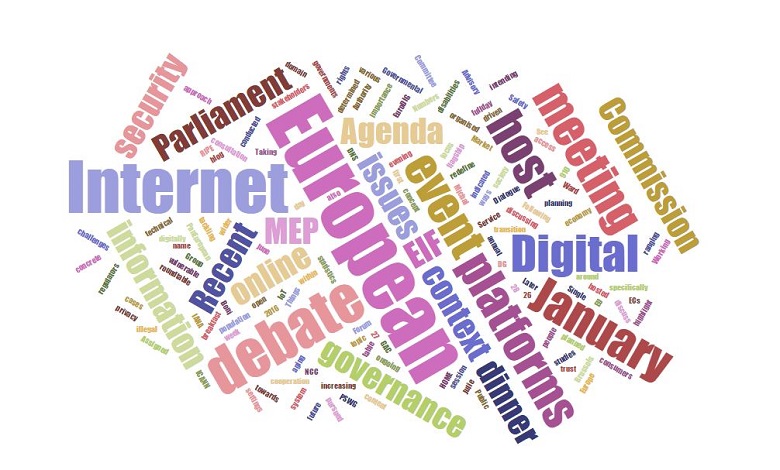 Following various events towards the end of 2015, such as the Internet Governance Forum (IGF) in November and the review of the World Summit on Information Society (WSIS) by the UN General Assembly in December, and summing up the EU Digital Single Market strategy, the last week of January 2016 has been dedicated to debating internet governance issues by EU policy makers in Brussels.

The first event of the week will be a planning meeting of the Pan-European Dialogue on Internet Governance on January 26, discussing also the annual EuroDIG event planned for 9-10 June 2016 in Brussels. Later that evening, the European Parliament will host a dinner debate organised by the European Internet Forum (EIF) tackling Digital Service Platforms. MEP Michał Boni will open the event and will table the recent consultation on online platforms of the European Commission. The session will debate the most indicated ways to redefine the concept of platforms in the context of the digitally driven economy within the Digital Single Market.
Following on from the dinner debate, MEP Julie Ward will host a breakfast debate in the European Parliament on January 27 on access of vulnerable people to the information society, once again under the flagship of the EIF. Recent studies conducted by the European Commission on the aging European population, and disabilities statistics around the EU, have determined the increasing importance of this topic in the wider internet governance context. On the same day, there will be a roundtable with governments and regulators hosted by RIPE NCC. Taking a more technical approach, the stakeholders will discuss issues ranging from the challenges of the Internet of Things (IoT) to the ongoing Internet Assigned Numbers Authority (IANA) transition and cooperation towards trust and security online.
On January 28, DG HOME will host a full-day meeting of the Public Safety Working Group (PSWG) of the Governmental Advisory Committee (GAC) of ICANN. More specifically, the meeting will focus on various cases of illegal content such as the security of the domain name system (DNS), privacy settings and consumers' rights, intending to highlight concrete issues to be pursued on the European agenda in the future.
Furthermore, on January 28 there will be a high-level group meeting on internet governance in which EU Member State representatives will gather to analyse upcoming assignments.
See the EC's Digital Agenda for Europe blog for further information.