Fighting online hate speech was the focus topic of the central press event, which took place at a school in Düsseldorf on the day of SID. It involved politicians as well as a number of celebrities: TV comedians, musicians and actors shared their views and experience with online hate.

The school event included workshops with young people as well as a moderated press conference. Also present were two of the three protagonists of the new klicksafe video series #lauteralshass, in which the three popular YouTubers Silvi Carlsson (channel "Silvie Rockstar"), Pocket Hazel (channel "Pocket Hazel"), and Robin Blase (channel "Rob Bubble") report about their experience with online hate speech, how they feel about it and how they deal with it. The videos were launched shortly before SID and were presented at the school event. 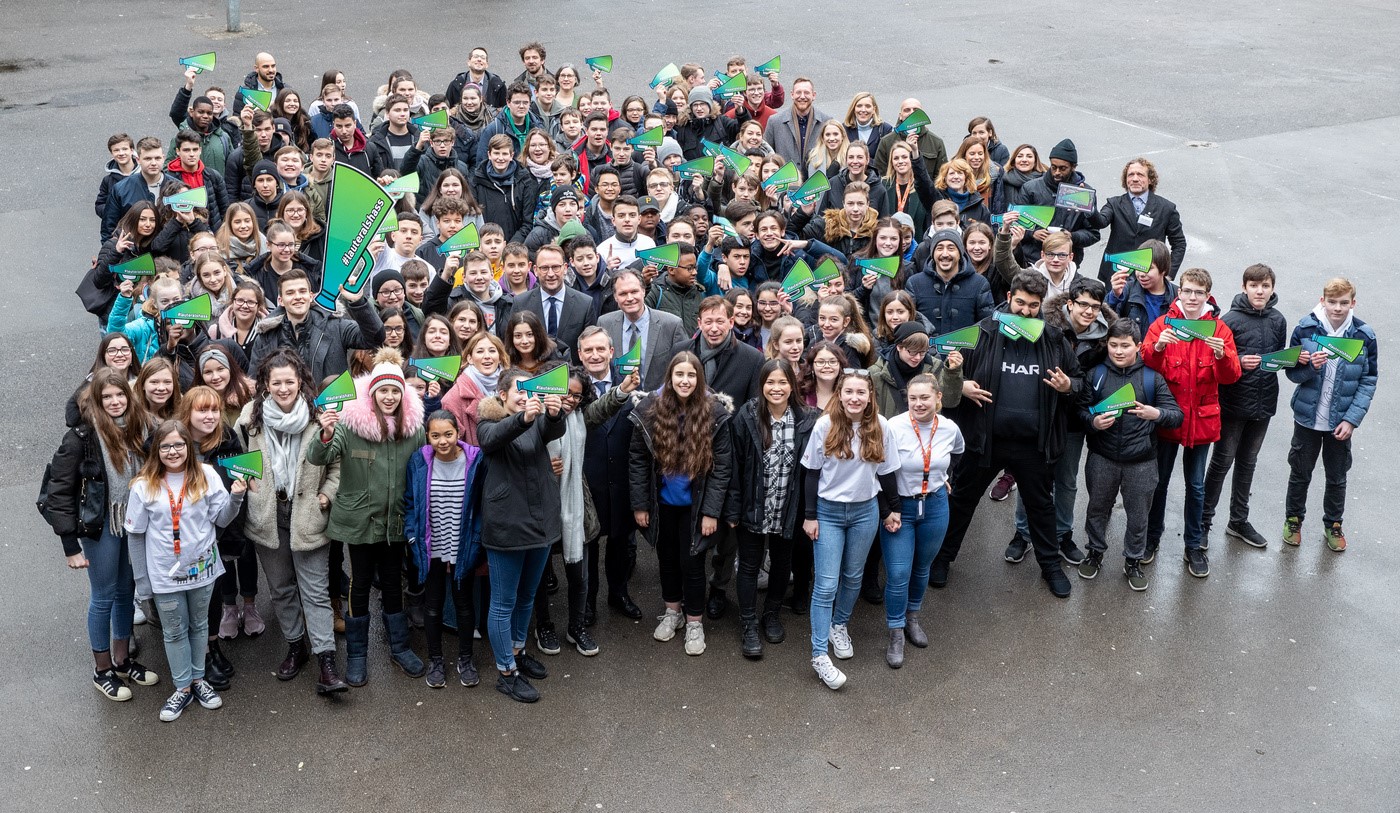 A central part of klicksafe's activities was the social media campaign #lauteralshass (#louderthanhate), organised in cooperation with the peer-to-peer network Medienscouts NRW. For the campaign, klicksafe called on schools, individuals and partner organisations to join in and take a stand against online hate speech. For that purpose, klicksafe made a megaphone illustration available for download and print. Hundreds of school classes, project teams, influencers (especially via Instagram) and many others joined in on Safer Internet Day, posting messages with the hashtag #lauteralshass on Twitter, Facebook and Instagram.

The hotlines and the helpline supported the #lauteralshass campaign via their social media channels and actively engaged in SID with their own activities. FSM held an interactive expert talk ("Medienpädagogischer Küchentalk").

Beyond the SIC's activities, there is traditionally the wide participation of many institutions, schools, initiatives and organisations for SID in Germany. Following klicksafe's call to action, more than 230 activities and events took place all over Germany or online. This included large-scale events, such as the conference on "New digital payment methods" by the Federal Ministry for Consumer Protection and Bitkom). Action days were also organised at Land level, such as at the Brandenburg Parliament in Potsdam, which gathered 40 students, YouTubers and Members of Parliament, or such as a series of action days all over Saarland. Other, smaller events, workshops and projects were organised by Media Authorities, libraries, Volkshochschulen (adult education centres), companies, foundations, and of course many schools all over the country.

SID also reached the political sphere in Germany – Chancellor Angela Merkel addressed the topic and the celebrations in her weekly podcast, and Safer Internet Day or the #lauteralshass campaign were promoted and shared by some of the big political players in the country. This included the Federal Government, the Federal Ministries for Family Affairs, for Consumer Protection and for Digital Infrastructure via their respective Facebook channels, the Federal Minister of Foreign Affairs via Twitter, as well as several political parties and members of Federal or State Parliaments via social media.

Another SID highlight in Germany followed on Monday, 11 February 2019, when Mariya Gabriel, Commissioner for Digital Economy and Society, and filmmaker and #SaferInternet4EU Ambassador Wim Wenders visited the John-Lennon-School in Berlin upon invitation of klicksafe. Together with Juliane Seifert, State Secretary of the German Ministry for Family Affairs, Senior Citizens, Women and Youth (BMFSFJ), Dr Marc Jan Eumann, Director of the Media Authority for Rhineland-Palatinate (LMK), and two representatives of Instagram, they discussed online safety topics with the students. More information and photos of the school visit can be found on the BIK portal.

Learn more about the SID press event in Düsseldorf, the video series #lauteralshass, the map of all registered SID activities, and the selected press and media coverage.

Parents' guide on safe use of smart speakers at home

With the holidays coming up, the German Safer Internet Centre (SIC) takes a closer look at smart speakers, which have probably made their way to many children's wishlists, and shares advice on safe use for parents.

Promoting tolerance and cultural diversity in the digital era

Bridging the gap between cultures is urgent and necessary for peace, stability and development. To emphasise this, on Tuesday, 21 May 2019, the world celebrates the World Day for Cultural Diversity for Dialogue and Development.

On Monday, 11 February 2019, the European Commissioner for Digital Economy and Society, Mariya Gabriel, as well as film director and #SaferInternet4EU Ambassador Wim Wenders were invited by the German Safer Internet Centre (SIC) klicksafe to a school visit at the John-Lennon School in Berlin.