Safer Internet Day 2019 in the Netherlands: Research on digital parenting

On Tuesday, 5 February 2019, Safer Internet Day (SID) was celebrated in the Netherlands. For the occasion, the Dutch Safer Internet Centre (SIC) looked forward to seeing the results of their research project on the attitudes of parents of children aged 12-17 towards their children's use of digital devices published.

It is a fact: the life of many children nowadays is hard to compare with the lives of children a few decades ago, especially because digital media are nowadays omnipresent in children and teenagers' lives. What do their parents think of this? Do they feel insecure in handling this at home? Do they know what the world of their children looks like online?

It turned out that 56 per cent of the parents interviewed say they talk at least once a week with their children about the things they come across on the internet. Parents are quite aware of the dangers their children come across online. According to the children themselves, these dangers are cyberbullying, online harassment, dangerous online challenges, sending or receiving pictures with a sexual connotation or online scams.

During this project, the Dutch SID worked together with a publishing agency to ensure that the results would receive attention on SID 2019, which proved to be a successful strategy. Early in the morning, the results of the study were published on the frontpage of a famous newspaper in the Netherlands, therefore receiving a lot of attention in several radio morning-shows. Two SIC representatives gave interviews and appeared in talk shows on national television. In total there were 232 publications relating to the research published by the Dutch SIC, all with positive sentiments. 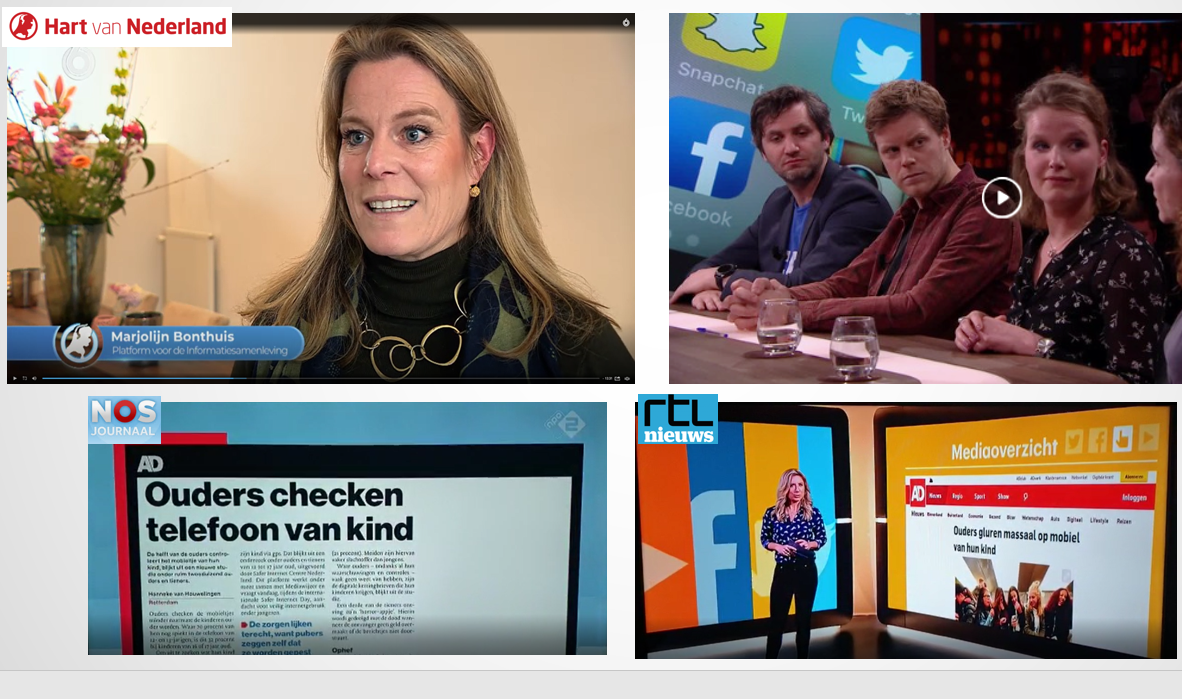 What might have also influenced the way this was picked up in the media, is that the first newspaper that mentioned the results suggested that 56 per cent of the parents who know what their children are up to online, know so because they spy on their children in secret. However, this assumption does not feature in the Dutch SIC's findings. In fact, they asked parents whether they knew what their children did online, and it turned out parents knew quite specifically what they did. Added to the answers to other questions, it appears that most Dutch parents seem to speak with their children about their online life on a regular basis. Based on this, the Dutch SIC did not conclude that parents investigate the phones of their children without them knowing – which they tried to communicate clearly to the media, as well as the fact that they do not encourage this behaviour. Parents should speak freely with their children about their online lives.

Over the last few years, the Dutch Safer Internet Centre (SIC) has managed quite well to get young people to participate actively in events related to better internet issues. One of the SIC's main missions is to make youth participation self-evident for partners, and for this purpose, the SIC shares a few lessons learned on youth participation below.

The Dutch Safer Internet Centre (SIC) commissioned a research on how digital literacy is progressing in primary schools according to teachers, school directors and ICT coordinators. The results were published on Tuesday, 24 September and received broad national media coverage on television, radio and in newspapers.

From 16-23 November 2018, the ninth edition of the national Media Literacy Week (Week van de Mediawijsheid) took place in the Netherlands. On this occasion, many activities were organised.

Placing a focus on youth and cybercrime on SID 2018

Safer Internet Day (SID) was celebrated on Tuesday, 6 February 2018, right across the globe. In the Netherlands, the Dutch Safer Internet Centre (SIC) placed a focus on youth and cybercrime as part of a range of activities and initiatives.