In Finland, Safer Internet Day (SID) was, as usual, celebrated in conjunction with the Finnish Media Literacy Week (MLW). The aim of the week is to advance the media literacy skills of children and young people as well as to support professional educators, guardians and other adults in their important media educational tasks.

The week was planned and carried out in cooperation with almost 60 partner organisations from all sectors of society, from governmental organisations to NGOs and businesses. They carried out altogether 35 campaigns for the week.

The 2019 Media Literacy Week was celebrated in almost 2,000 local institutions (such as schools, kindergartens, libraries, youth work centres and museums) across the country.

Safety issues arose from the discussion on media

Just a couple of weeks before the actual week of celebrations, there was huge media exposure for themes like sexual harassment and sexual violence. There were several cases revealed about grooming and sexual abuse towards children. There was a discussion and a debate on whether children – or adults – are aware what is appropriate behaviour online and whether one should report on suspicious contacts. When adolescents were asked about disturbing behaviours or contacts they experience online, some of them replied that they find it quite "normal" to be exposed to shady contacts or conversations that have some sexual content, and that they would most likely ignore or "freeze" anyone making such a contact.

This is problematic in at least two ways: first, it is not okay to feel that these behaviours are so normalised, and it is sad and wrong that children and adolescents are exposed to it on a regular basis. Second, not everyone has the reflex of ignoring the unknown person making inappropriate suggestions online, from nude pictures to meetings face-to-face.

Discussion on harmful content and contact online was therefore more than ever necessary, and several organisations published material accordingly, such as a new guidance material for parents and teachers about grooming and sexual abuse. KAVI, the organisation in charge of the Media Literacy Week, published a guide "Yhdessä turvallisesti netissä" ("Safe online together") mentioning the issues of bullying, sexual harassment and abuse, and online privacy. In addition, Save the Children launched their Be Safe Online campaign, including a video encouraging adolescents to report sexual harassment to the hotline. Safety issues (among other media educational subjects) were also dealt with in online parent's evening, organised by the Mannerheim League for Child Welfare.

Visual is everything – especially on social media 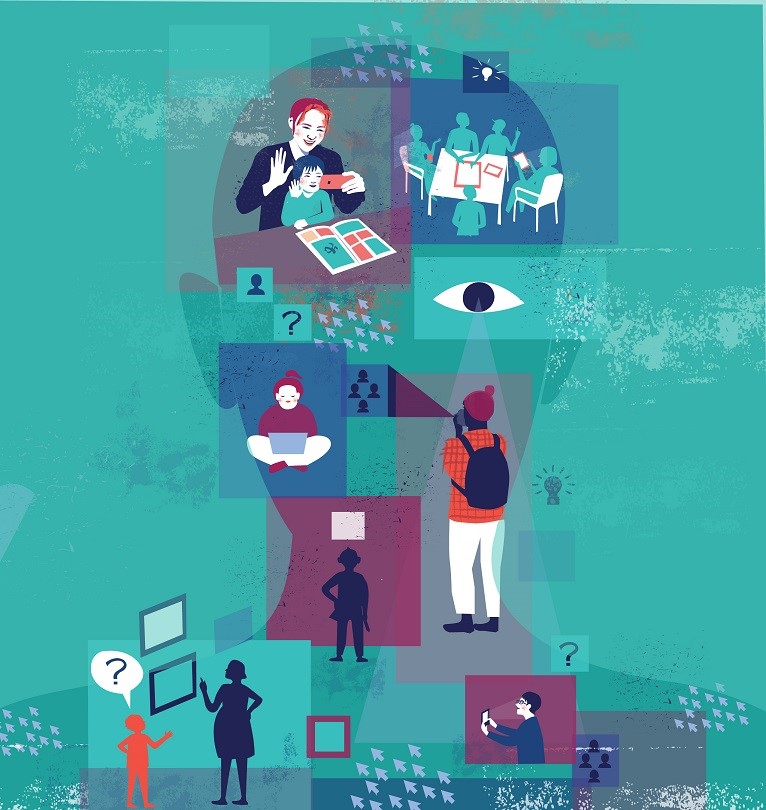 Every year, the Finnish SIC decides on one theme for the MLW and makes a new material on the chosen topic together with partner organisations. This year, the theme the importance of the visual aspect in media literacy contents. The organisation, together with five partners, designed a guide for teachers and other professionals working with children and young people, called "Mielen kuvittajat" ("Illustrators of the Mind"). Its aim is to give ideas about the visual world and its relations to identity, how to interpret some visual aspects, and how to support one's own visual productivity. In addition to this, one partner published a video about adolescent's visual culture on social media. It is targeted to adults, especially youth workers and teachers.

MLW is here to give ideas for media education all year around!

Lauri Palsa from the National Audiovisual Institute of Finland gives an overview of the revised Finnish national policy for media literacy.

Images are gaining in importance in the social world online and Finland is no an exception. The ever-faster digitalisation has increased the amount and use of imagery uploaded online. New forms of having the illegal data not only uploaded but also downloaded and spread out is constantly changing and that challenges the work against child related sexual abuse material (CSAM).

BeSafeOnline – How to protect children and adolescents

Advisors of Save the Children Finland have, in their work, come across a phenomenon in which suggestive images taken by and of children and adolescents have spread uncontrollably over the internet and ended up in inappropriate or criminal use. This phenomenon is also recognised by the police. Save the Children Finland set out to work in collaboration with the National Bureau of Investigation (NBI) to protect children in digital media.