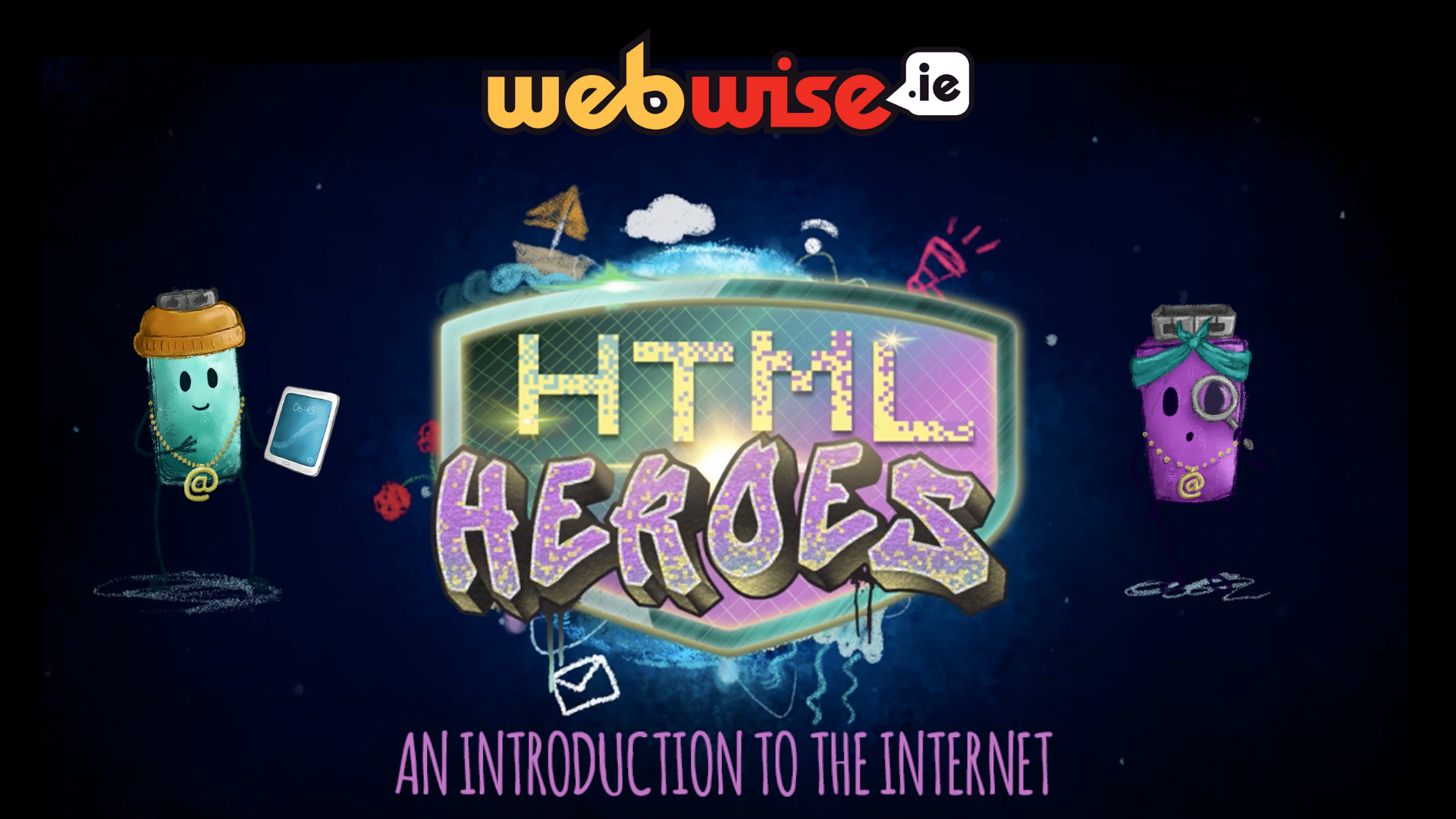 The "HTML Heroes" Programme is aimed at promoting safe online practices for pupils in third and fourth classes. It contains eight lessons and is supported by three colourful animations where two USB characters, Archie and Ruby, perform catchy and informative internet safety raps.

As with all of the Webwise resources, it is closely aligned to the SPHE (Social, personal and health education) curriculum and other key areas within the primary curriculum. The programme was developed in consultation with a panel of experts within the fields of special education, online safety, parenting, digital technology and SPHE. The programme went through a thorough testing phase with a selection of schools across Ireland before its launch on SID.

Some of the topics that are covered in the HTML Heroes are: privacy, cyberbullying, evaluating information online, advertising and fake news. It was important to highlight newer concerns such as screen time, online gaming, online advertising, and social media. The resource is an online-only resource and is free for all schools to access via webwise.ie/html-heroes. Schools across Ireland will also receive an information pack with the resources on their very own HTML Heroes USB stick following the launch. The pack will also contain a prepared, scripted Internet Safety Talk for Parents, which schools can use to promote online safety with the wider community.

Minister for Education and Skills Joe McHugh TD said: "Digital and online safety is a key issue for children and young people, as well as for parents and teachers.  It is important that schools have access to excellent resources to support children to learn about safer use of the internet. The HTML Heroes education programme is a really creative and dynamic programme, which has had lots of input from children to ensure its messages are clear. It provides primary schools with an excellent introduction to internet safety and digital literacy as an integral part of the Government Action Plan for Online Safety."

Ciara O'Donnell, National Director, Professional Development Service for Teachers, said: "This is a wonderful programme for primary schools, fun, informative and engaging for students. New technologies bring challenges and benefits, this new resource will assist schools and young people as they begin to use technology and the internet."

Young people from all over Ireland came together on Thursday, 10 January 2019 to take part in the annual Webwise Safer Internet Day Ambassador Programme in the Google Headquarters in Dublin. Over 130 second-level students signed up to become Safer Internet Day Ambassadors, promoting online safety in their schools, clubs, and communities. The peer-led initiative by Webwise Ireland has been running for the last five years and has proved hugely successful in promoting internet safety in schools around Ireland.

The students involved in the programme got involved because they wanted to tackle online safety issues with their peers and help make the internet a better place for young people. It is vitally important that young people feel empowered to act on issues such as cyberbullying, fake news, photo-sharing, and to promote healthy practices among their peers. Many of the students feel that they are the generation that uses the internet the most and they would like the tools to help others when they run into difficulty. The Safer Internet Day Ambassador Programme is a great way to meet like-minded teenagers, discuss issues and come up with solutions. Each SID Ambassador has committed to leading an internet safety campaign in their school for Safer Internet Day. We are looking forward to seeing the amazing work they have done in their schools.

The SID Awards are open to both primary- and second-level students and have a range of competitions students can enter. Categories in the competition include: Best Use of Social Media, Best Use of Technology, Best Arts (Music, Poster, Art, Writing), Best Anti-Cyberbullying Campaign, Best Video, Best Whole School Campaign, and the Safer Internet Day Ambassador Leadership Award.

There are a host of amazing prizes on offer, such as three drones for primary school entrants, and a secret gig held in Microsoft Dreamspace for secondary school winners. Schools have until Tuesday, 5 March 2019 to enter. For more information, visit http://www.webwise.ie/sidawards.

Industries across Ireland have marked SID by launching a series of positive initiatives in a bid to make the internet a safer place for all. Twitter Ireland hosted a panel discussion for SID 2019 discussing the four R's of online safety: Respect, Responsibility, Reasoning, and Resilience. Panel members Senator Aodhán Ó'Ríordáin, Andy Lee, Louise Bruton, and Ellie Kisyombe shared their professional and personal experiences on the topic. They were not the only one celebrating, as Google Ireland used Safer Internet Day as an opportunity to release new password and account protection tools for users whilst tech giant Microsoft Ireland also marked Safer Internet Day by publishing its findings of its Digital Civility Index (DCI). The index shows how safe and civil each country is, based on their online interactions. Results showed that Ireland ranked eleventh out of the 22 countries surveyed. The United Kingdom was rated as the safest and most civil country, closely followed by the United States.

An Garda Síochána continued their crackdown against crimes of online exploitation and sexual coercion by launching phase 5 of "Operation Ketch". The operation was launched for Safer Internet Day 2018 to coincide with the educational resource "Be in Ctrl".  The post-primary resource "Be In Ctrl" seeks to educate students about these crimes, help them build strategies to avoid becoming a victim and promote the reporting of incidents. The resource contains three lessons, an information pack for school leaders, and is supported by a Garda Schools' Talk. Over 137 addresses were raided as part of Operation Ketch 2018, with a further 22 addresses being searched in during phase 5.

Ireland: Back to school campaign video reaches over 1 million views

Webwise Ireland launched its back to school campaign video in late September. The short 2 and a half minute video, #BeInCtrl - A Short Film on Online Grooming was released on social media as a social media campaign. It has been watched 1.2 million times and received over 10,000 shares on Facebook to date.