On the 16th international Safer Internet Day, on Tuesday, 5 February 2019, Austrian Safer Internet Centre (SIC) Saferinternet.at has presented the results of their recent study on the topic of "The digital time stress of young people". The insights show how young people deal with smartphones in their daily life.

In Austria, young people are annoyed by the excessive usage of smartphones. More than a third of the respondents (35 per cent) aged 11 to 17 consider their usage of smartphones and other digital devices to be sometimes excessive. This concerns older children more often (44 per cent of 15 to 17 year-olds, 27 per cent of 11 to 14 year-olds). The results display gender differences between girls (40 per cent) and boys (32 per cent).

59 per cent of the respondents criticise their friends for paying too much attention to their smartphones when they hang out. Comparably high is the proportion of young people (55 per cent) indicating to be annoyed by their own behaviour in this regard. Criticism is also aimed to the parents: every third respondent (34 per cent) is annoyed by the frequency of their extent of smartphone usage. 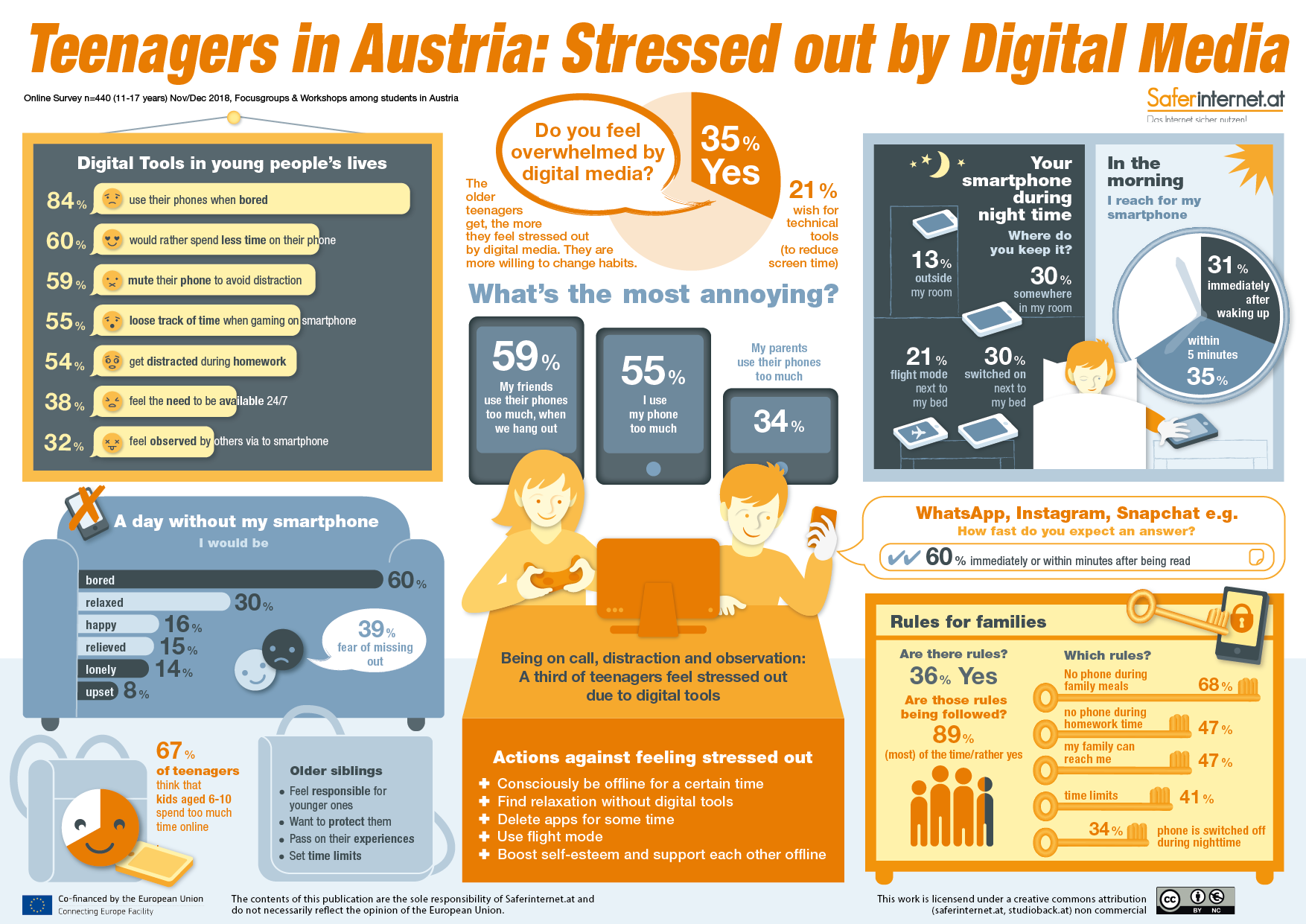 The social pressure to answer

60 per cent of the young respondents expect to receive an answer to messages on WhatsApp, Snapchat and other direct messaging apps within one or several minutes. At the same time, this expectation is named as one of the major factors of digital stress by young people. The number of messages exchanged daily in groups on social networks reinforces this stress – young people report that they exchange more than a hundred messages a day. Especially for younger children, it is often not easy to withdraw from the group pressure to participate in these discussions. They are worried about social disadvantages and exclusion.

First thing every morning: the smartphone

The study shows that a lot of young people (66 per cent) look at their smartphones within five minutes after they wake up. Only 4 per cent of the respondents wait more than one hour to check their smartphone. In this context, it is unsurprising that the smartphone mostly stays in the bedroom of young people (81 per cent) – 30 per cent of the respondents indicate they do not switch their phones off, and 21 per cent use the aviation mode in or directly beside the bed.

62 per cent of the respondents have or had rules on digital media use in their families. Most frequently, this concerns a ban on smartphones during common meals and school homework, as well as time limitations. At the same time, nearly half of the respondents indicate that their parents require them to be constantly available. 46 per cent of those who have recent experiences with rules on digital media, indicate to "always" or "nearly always" respect them, and 43 per cent "more or less". These responses are self-assessments only, but they still bear an encouraging message for parents: agreeing on media usage rules makes sense!

The older respondents of the survey in particular indicated to have already taken measures against feeling stressed by digital media. For instance, 28 per cent of respondents explain to have taken at least once a digital diet – consisting in completely renouncing to the use of their smartphone for a certain time. The focus groups which were additionally carried out with 14 to 18 year-olds focused on their practical knowledge on how to deal with online stress. Saferinternet.at collected their "life hacks" to support others in finding their own, competent approach to the question.

The survey on the topic "The digital time stress of young people" was carried out by the Institut für Jugendkulturforschung on behalf of Saferinternet.at and ISPA (Internet Service Providers Austria). The representative online survey asked 400 individuals aged 11-17. The survey was complemented by focus groups and the practical experiences of the Austrian Saferinternet.at workshops.

Saferinternet.at supports schools and parents with learning material, workshops, trainings and a range of information services and the video-format to advise parents "Frag Barbara!". All this services and downloads or order option are under www.saferinternet.at.

The Austrian Safer Internet Centre has published a number of articles (in German) on staying safe online during the COVID-19 pandemic. Below you can find them organised by topic.

The Austrian initiative Saferinternet.at was involved in a major study on the topic of "Civil Courage 2.0". The insights show how important bystanders' role is in online conflicts.

jugend.support is an advice and support website addressing kids of 12 years and older. It was developed by order of the German Federal Ministry for Family Affairs, Senior Citizens, Women and Youth (BMFSFJ) by partners within the German Safer Internet Centre (SIC). The awareness centre, klicksafe, manages the project in cooperation with the hotlines internet-beschwerdestelle.de (implemented by eco and FSM) and jugendschutz.net, the child helpline Nummer gegen Kummer, as well as the peer-to-peer project JUUUPORT.de.

In May 2018, Austrian helpline "147 Rat auf Draht" and SOS Kinderdorf jointly released a study on how young people in Austria are affected by sexual harassment – in particular, grooming – and violence online.

Austria is Back2School with #Saferinternet4EU

EU Commissioner Gabriel visited the Bundesrealgymnasium Feldgasse today, together with the Austrian Federal Minister Faßmann. During this Back2School event, a milestone in the #SaferInternet4EU campaign, students discussed safe internet usage.