A parent's guide to Fortnite

Online game Fortnite has raised great concerns among Greek parents over the past year due to the strong success of the game with children and young people.

According to data from the Helpline (210 6007686) of the Greek Safer Internet Center (SIC), in the last six months, over 80 per cent of the calls were from concerned parents seeking advice on how to put a limit to their child's excessive gaming on Fortnite. Similar concerns are raised by the educational community since the game appears to monopolise children's interest and debates during school hours, while it often results in poor school performance and significant reduction in physical activity, as many children admit spending their night playing online.

Free of charge, but with big profits for the company that created it

Fortnite managed to become children's favourite online game in just a few months, climbing to the top of the video game list with 125 million active users and $300 million in monthly revenue for Epic Games, the company behind it. How is this possible for a free game?

Much of the revenue is due to the optional V-bucks, the digital coin of the game, which allows the players to aesthetically upgrade their avatars and weapons. These upgrades do not affect the performance in the game as they are for purely decorative purposes.

The creator company has invested not only in massive large-scale advertising but also in groups of specialised psychologists in order to create an environment that attracts the end user (mostly children and teenagers but also grown-ups) and keeps them engaged in the game for hours. Every detail (colours, shapes, start of the game) is particularly thoughtful and carefully designed, which has spurred the company's profits.

Why is it so popular?

One of the main reasons for the game's popularity is that it is a cross-platform game that can be played on almost all available devices, tablets, PCs, smartphones, PlayStation, Xbox, and more. It is also a well-crafted game with high quality graphics and cartoon figures that appeal to children.

The company is making frequent updates and releases new challenges, which keeps children's interest alive. Additionally, and perhaps unlike most other games, the tracks are completed in a relatively short period of time. This way, however, the player's interest is rekindled by the next track.

A further innovation of Fortnite that is much loved by children is the chat feature through a microphone, that allows children to speak to each other while playing.
Although the game's general philosophy is based on violence (you must kill your opponents using weapons in order to win) there are no violent images of blood.

What are the risks?

One of greatest risks for children playing online games is the excessive use. It is very important for parents to set limits on their child's playing time, and at the same time try to direct them to other physical and recreational activities that do not necessarily include technology. There are tools that can help parents in their effort to set limits to the time their child spends on online gaming. You can read the relevant article of the Greek Safer Internet Center (SIC) on how to control and limit your child's playing time on two of the most popular game platforms, PlayStation and Xbox. There are also several downloadable applications for self-management of screen time.

The game provides users with the option to create teams and play while discussing through text messages or talk directly using a microphone. As with any other online contact of the child, no one can ever be sure that an aspiring "friend" is indeed the one he claims to be. It is important for parents to talk to their children from an early age about the risks of being in contact with strangers through online video gaming, social media, or live chat applications. It is also imperative that parents monitor their child's online contacts and do not leave them unattended on the internet.

There is a relevant "friends" only setting option which can be selected in the game. 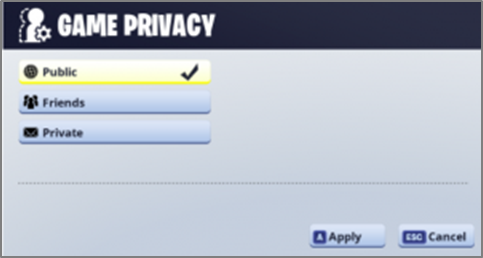 Due to the live chat through a microphone option while playing, discussions can easily get out of control, especially during the peak of the game. If a child tries to leave in the middle of a game trying to respect screen time boundaries set by parents, there is a good chance that they will be exposed to insulting language by other users. It is essential that parents talk to the child in order to set their boundaries for co-players from the beginning.

The game offers the option to filter insulting language in text chat. To do this, press the icon with the friends, then the settings icon and select "Filter mature language". 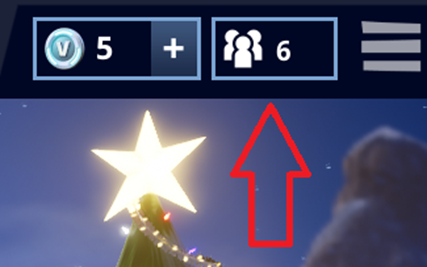 One of the main reason Fortnite is such a popular game is that downloading the game is free of charge. However, there are in-app purchases that bring huge revenues to its creating company. These purchases offer nothing in the course of the game, since they are purely for decorative purposes. Talk to your child and be clear from the beginning that you do not agree with such practice or, in case you are more "flexible" on this issue, make it clear that each purchase should be done always after consultation with the parents.

Fortnite is an online game developed by Epic Games.