Similar to the videos created in 2017, Wunderman created three videos with ambiguous titles. On 18 November 2018, the European Day of the Protection of Children against Sexual Abuse and Sexual Exploitation, Child Focus launched the sequel to its haunting campaign by sharing videos with titles such as "Cute toddler likes to suck", and reached over 500,000 viewers on social media. 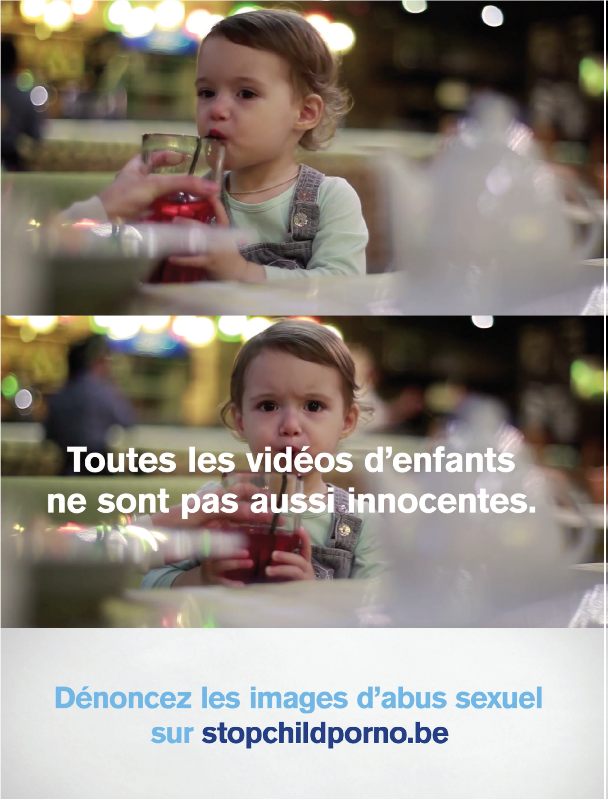 However, the viewer quickly recognises that these are innocent videos, followed by a message indicating this is not always the case for videos depicting children. The videos then encourage people to report CSAM to the Child Focus hotline.

The campaign was also replicated on the dark web by placing a version of the videos on specific forums, with the aim to confront people who consciously look out for CSAM and to encourage them to seek immediate help for their behaviour. People who downloaded the video clip were then directed to the Child Focus website.

The success of this campaign could possibly explain the sharp rise in reports of presumed CSAM received through the Child Focus hotline website. The numbers show an increase from 746 in 2017 to more than 1,900 in 2018. 70 CSAM reports hosted in Belgium were referred to the Belgian police for further inquiry and more than 360 to sister organisations in their respective countries.

For more information about the work of the Belgian hotline, visit the INHOPE website and the hotline's website stopchildporno.be.

Find out more information about the work of the Belgian SIC generally, including its awareness raising, helpline, hotline and youth participation services, or find similar information for Safer Internet Centres throughout Europe.

#Vu, the new Belgian theatre play on the risks of sexting

On Wednesday, 23 May, Child Focus, the Belgian Safer Internet Centre, has launched #Vu, a theatre play for schools meant to raise awareness about the risks of sexting. Performed by the Arts Nomades theatre company, the play ‘#Vu' premiered in Brussels in May 2018.