The third meeting of the Greek Safer Internet Centre's (SIC) Advisory Board took place on Tuesday, 13 November 2018, gathering representatives of the state, industry, the academic community and child protection organisations. The discussions focused on the changes in the protection of children's online privacy that are still pending, even after the implementation of the General Data Protection Regulation (GDPR). 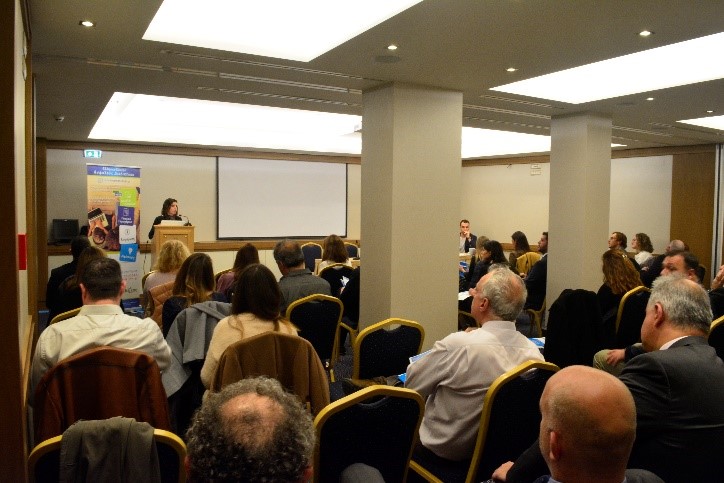 Dr Konstantinos Limniotis, from the Hellenic Data Protection Authority, pointed out that there is still much to be done in order to achieve the correct implementation of the regulation, which has not been voted in Greece yet (some say it could be done by the end of the year). According to Mr Limniotis, the basic principles of GDPR are transparency and accountability, through which we can achieve privacy. "The full implementation of the law impinges not only on legal but also on technological challenges. The mechanism for establishing valid consent from parents when the child belongs to the age group where digital consent is required continues to be a crossword puzzle for strong solvers. We have to find a solution that does not lead to a larger collection of personal data" Mr Limniotis said, adding: "Another obstacle to be overcome by the internet industry is the default options, but also the overall design in specific applications as to whether the data protection by design and by default principles are actually adopted." He also referred to the results of a recent study on Facebook, Google and Microsoft which took place in Norway on behalf of a consumer protection institution, showing that "in the end" users may be "guided" in choosing not-so-much private-friendly settings. 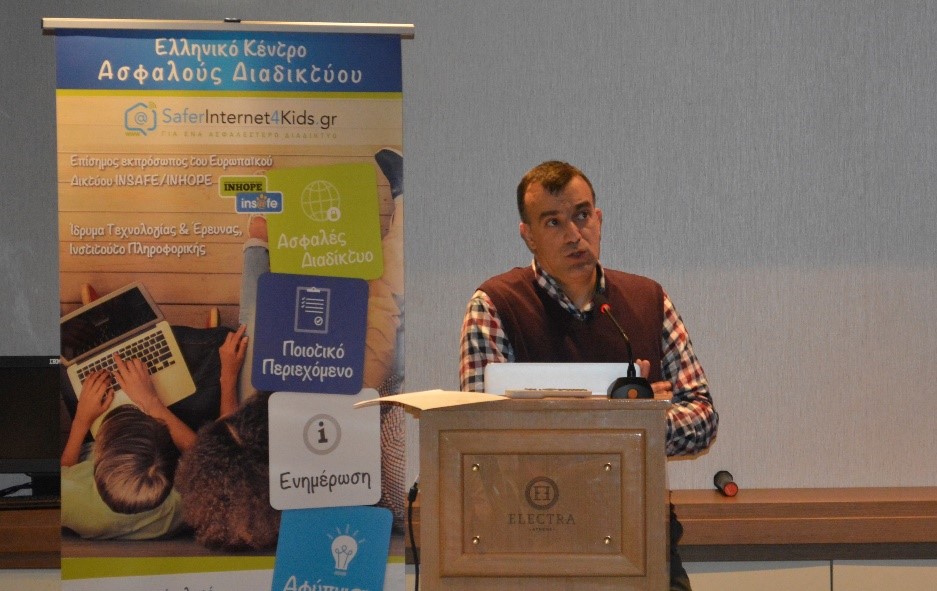 Facebook representative Laura Bononcini focused on the steps that the social network has made lately in order to align with the GDPR. Ms Bononcini pointed out that the social network in question is making – and will continue to make – coordinated efforts to protect its users and especially children, adding that thousands of juvenile user accounts have already been closed, and noting that there is a difficulty in finding an effective and correct legal way of obtaining parental consent. At the same time, Ms Bononcini presented all the new tools through which Facebook and Instagram are trying to provide security to their users and she encouraged parents to consult their help centres.

Viber spokesman, Mr Momchil Elenkov, focused on the fact that this popular application of more than one billion users guarantees its members' privacy protection. "It is impossible for Viber to read written conversations or listen to calls because it uses end-to-end encryption on all devices by default" he added, highlighting that, for Viber, it is of top priority to maintain encryption as one of the main features of the application. Additionally, there is a choice of deleting already sent messages, sending time-defined messages or creating secret conversations, which help protect users' privacy. 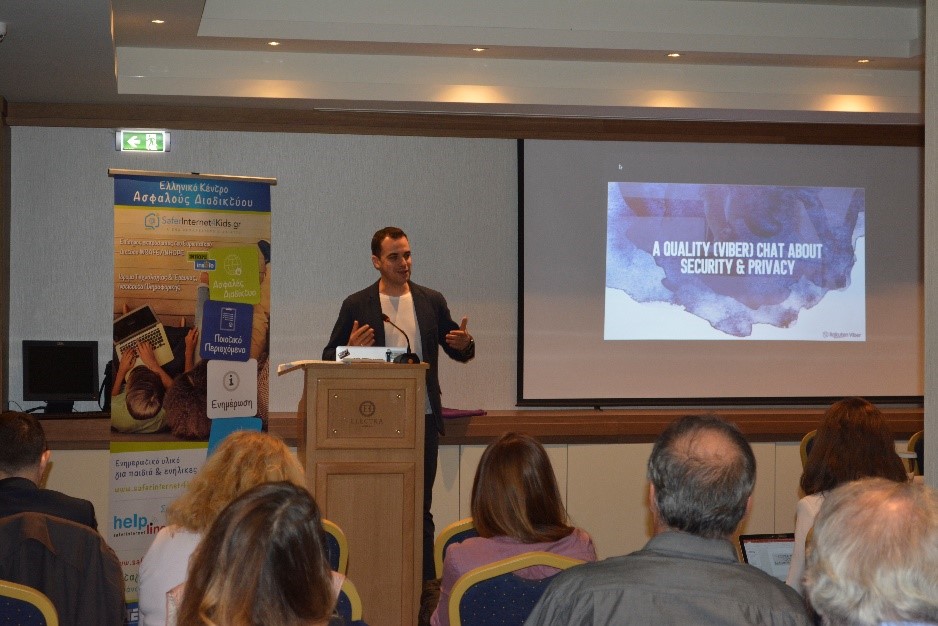 The eSafetyLabel National Coordinator, Mr Aris Louvris, in his interesting speech "GDPR & Privacy in Schools" urged schools to inform parents about the status of personal data protection through a letter or an email in which they should state which data they collect, the reason they are collecting it, and the third parties that are aware of it. As he characteristically pointed out, beyond adult parents and guardians, students should learn to protect their data by themselves. 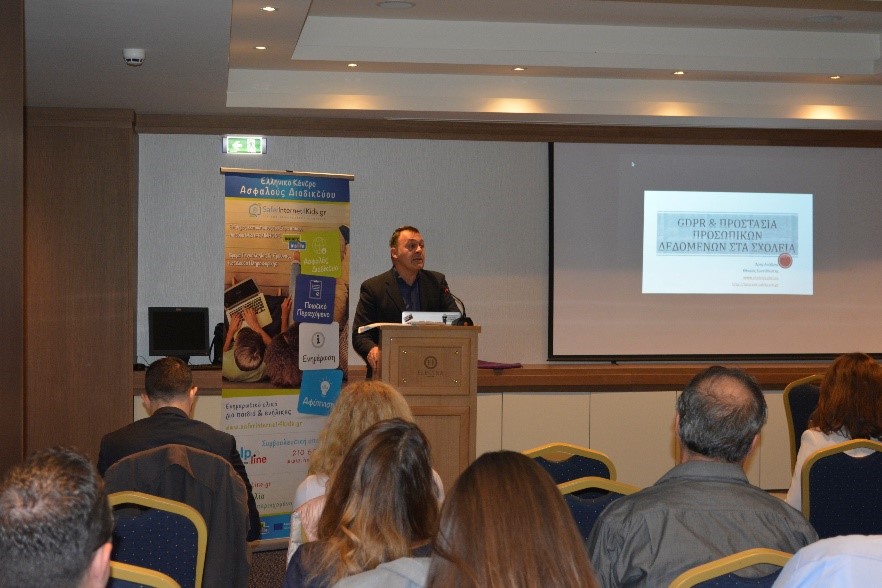 The Coordinator of the Greek Safer Internet Centre (SIC), Professor Paraskevi Fragopoulou, informed the participants of the priorities of the EL-SIC project. Moreover, Mrs Fragopoulou presented the work of the SIC during the last two years regarding awareness, support of children and families through Helpline 210 6007686 and  the confrontation of illegal content through the Greek hotline for illegal internet content, SafeLine.

She mentioned in particular the volume of informative material available to children, parents and teachers through the SaferInternet4Kids.gr website, but also the celebration of Safer Internet Day (SID) 2019 on 5 February 2019, taking place in more than 140 countries around the world. The Greek SIC coordinates the celebrations in Greece. This year, the central event will take place at the Amphitheater of the Ministry of Education where, among other things, SaferInternet4Kids will award the prizes for the student competition running under the auspices of the Greek Ministry of Education, with the main theme "Together for a better internet". 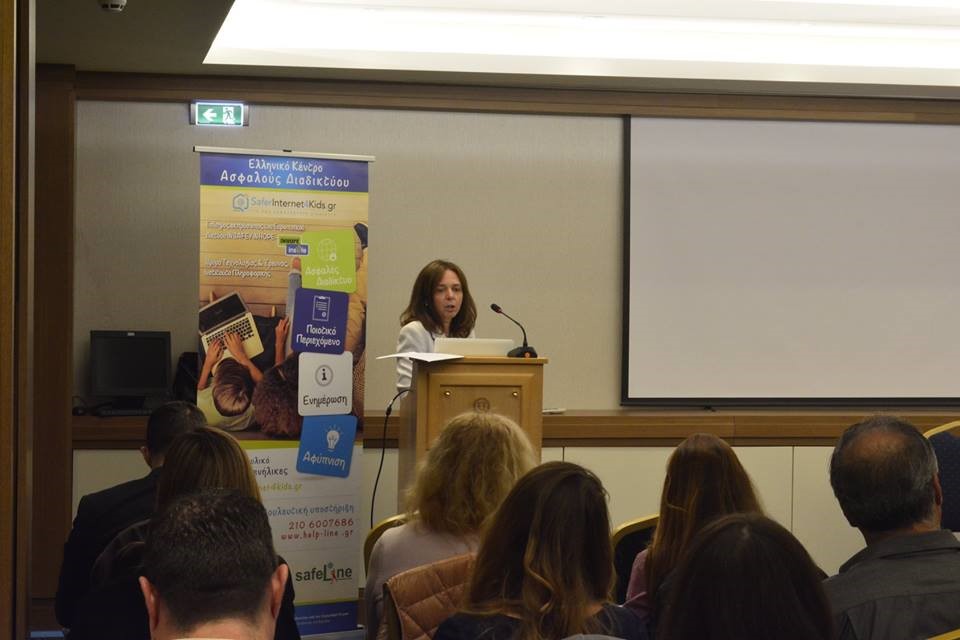 Large-scale research on children's online safety for SID in Greece

With the pledge that every day will be Safer Internet Day (SID), children, young people, educators, parents and all other stakeholders in Greece participated in the celebration of SID 2019.

On Tuesday, 5 February 2019, for Safer Internet Day, a big event was organised by the Greek Safer Internet Centre (SIC) at the Greek Ministry of Education, where more than 1,000 participants raised their voices for one message: "Together for a better internet".

First time online: What measures should I take and how should I advise my child?

For the Christmas season, and because children's age of first contact with a digital device keeps getting lower and lower, the Greek Safer Internet Centre (SIC) has released a set of educational resources to help parents accompany their children in this crucial step.

GDPR: The question of minimum age on social networks after May 2018

As of May 2018, with the entry into force of the General Data Protection Regulation (GDPR), stronger rules will apply on data protection. The Austrian Safer Internet Centre (SIC) has looked at the measures taken by the largest social networks such as Facebook, Instagram, WhatsApp, YouTube and Musical.ly regarding the minimum age guidelines for their usage.

The Greek hotline SafeLine has published its 2017 annual report, which focuses on the statistical data and the trends observed during the period 2011-2017.

On the final day of the inaugural Positive Online Content Campaign (POCC) Awareness Week, we focus on national positive online content initiatives. Here, we hear from the Greek Safer Internet Centre (SIC) on some of its resources which help to promote positive online content concepts with the aim of providing better online experiences for children and young people.