A view from the booth: Experiences from IGF 2015 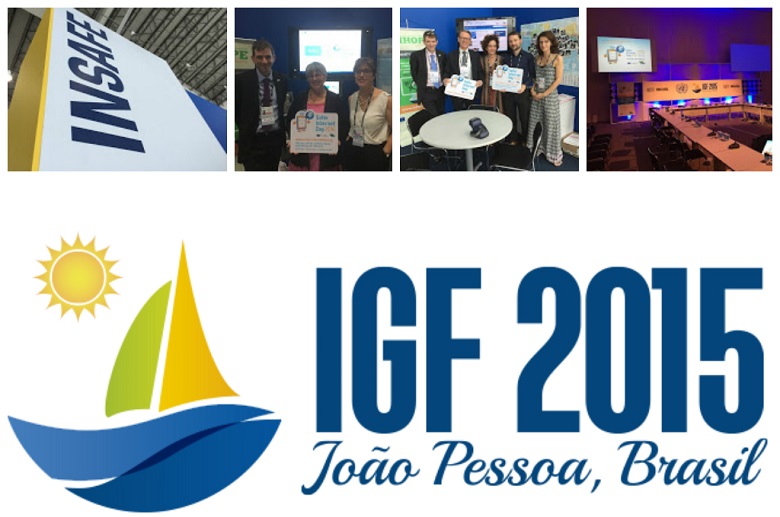 "This year's IGF was in the Brazilian city of Joao Pessoa; a city built around tourism, with the recently constructed Poeta Ronaldo Cunha Lima Conference Centre providing the location for the event.
"This annual four-day long conference offers unique opportunities to meet and discuss all areas of Internet Governance with others from across the world. This year, the Insafe-INHOPE exhibition booth was in an ideal position.
"Over the course of the four days, the team spoke to delegates from across the world, encouraging them to participate in Safer Internet Day (SID). Delegates were invited to show their support by having their photo taken with the ‘retro' Polaroid camera; technology that was evidently of great interest to many – indeed many people came back at the end of the IGF to collect their photo. The world map on the booth wall was soon covered with Polaroid photos illustrating that a vast number of countries will be (or already are) celebrating the day.
"While the team were focused on the booth, there were a few workshops of notable interest: the subject of hate speech and radicalisation in particular. The two workshops I attended were dominated by concerns that the right to free speech would potentially be affected by policies developed to counter terrorism and radicalisation.
"The Insafe workshop organised on the Friday morning was the culmination of the promotion of Safer Internet Day and took place in one of the primary workshop rooms. The workshop involved a distinguished panel of contributors all outlining their perspectives and recounting activities on past Safer Internet Days, giving the audience clear examples of how anyone can get involved. Contributions also came from panellists from a number of countries, both present and remotely, as well from young people.
"The IGF continues to be a primary opportunity to promote Safer Internet Day as well as the strengths and contribution of the wider Insafe network (supported by the European Union). It is unparalleled to connect with a broad range of countries as well as those with an interest in Internet Governance.
"Plans to attend the 2016 IGF in Mexico to promote Safer Internet Day should be initiated to continue the promotion and expansion of this important campaign".