SOS Il Telefono Azzurro, the helpline and hotline component of the Italian Safer Internet Centre (SIC), is delighted to announce that its President, Professor Ernesto Caffo, has been appointed as a member of the Pontifical Commission for the Protection of Minors, that was reconstituted by Pope Francis.

The advisory body, composed of eight women and eight men, spans multiple disciplines of international expertise in the field of safeguarding children and vulnerable adults from the crime of sexual abuse. This commission will be led by the reconfirmed Cardinal Sean O' Malley and it guarantees to provide a global and comprehensive perspective. 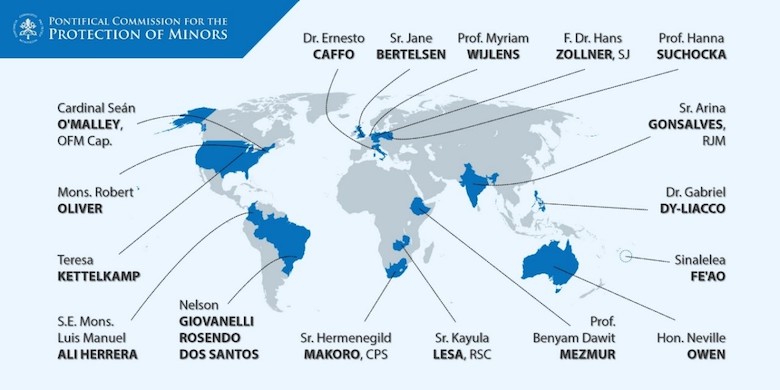 The new members include Benyam Dawit Mezmur from Ethiopia; Sister Arina Gonsalves, RJM from India; Neville Owen from Australia; Sinalelea Fe'ao from Tonga; Myriam Wijlens from the Netherlands; Ernesto Caffo from Italy; Sister Jane Bertelsen, FMDM from the U.K.; Teresa Kettelkamp from the US; and Nelson Giovanelli Rosendo Dos Santos from Brazil. The returning commission members are Dr Gabriel Dy-Liacco from the Philippines; Bishop Luis Manuel Alí Herrera from Colombia; Father Hans Zollner, SJ from Germany; Hannah Suchocka from Poland; Sister Kayula Lesa, RSC from Zambia; Sister Hermenegild Makoro, CPS from South Africa; and Monsignor Robert Oliver from the US.
According to the Vatican's press release, "Representatives from several new countries will now offer their insights and experience to the Commission, reflecting the global reach of the Church and the challenge of creating safeguarding structures in diverse cultural contexts."
Furthermore, it announced that discussions have also already been underway to create an International Survivor Advisory Panel, building off the experience of the Survivor Advisory Panel of the National Catholic Safeguarding Commission in England and Wales.
Professor Caffo, honoured by his appointment, wishes to thank the Vatican and Pope Francis for supporting and encouraging the safeguarding of children and vulnerable adults from any kind of abuse and violence. INHOPE applauds Professor Caffo on his appointment and looks forward to continuing important work together this year and in the future.
Find out more about the work of the Italian Safer Internet Centre (SIC), including its awareness raising, helpline, hotline and youth participation services.
Find out more about the work of INHOPE, the International Association of Internet Hotlines.
Image copyright of the Pontifical Commission for the Protection of Minors.

On 5 May 2018, the Italian National Day against Pedophilia and Child Pornography*, SOS Il Telefono Azzurro Onlus (one of two internet hotlines operating in the country, and member of INHOPE, the international association of internet hotlines) organised a conference titled "Sexual abuse and pedophilia: Knowing the phenomenon to break the silence". Discussions focused on the importance of multi-disciplinary and multi-level collaboration between different players.