Mobilising the UK to "Create, connect and share respect" on SID 2018

The UK marked Safer Internet Day 2018 by mobilising people across the country to "Create, connect and share respect" and explore how a better internet starts with each and every one of us. The message at the heart of this year's UK campaign was about promoting healthy relationships online by developing children's digital empathy and inspiring kindness and respect.

The campaign saw many stakeholders come together to help inspire a national conversation. Over 1,700 organisations across the UK delivered activities for the day, including schools, police forces, government, companies, football clubs, charities and others – more than ever before.
Youth events across the UK
Young people played a central role in the day, with youth-led events across the UK in London, Cardiff, Edinburgh and Antrim. 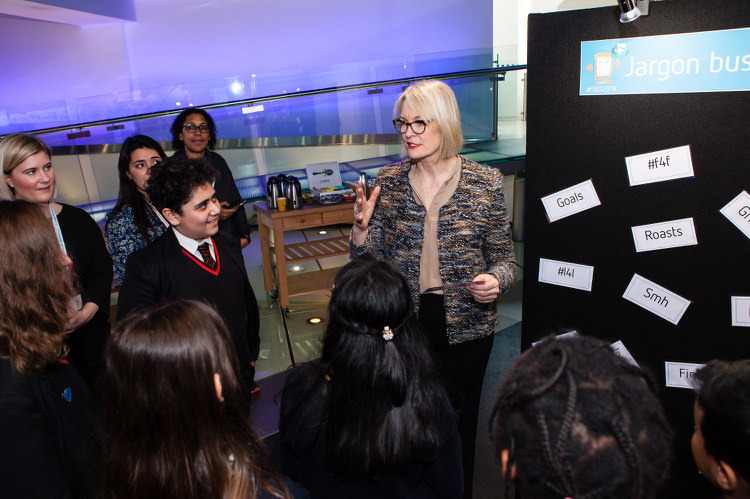 Young people at London event with Margot James, Minister for Digital and the Creative Industries
In London, over 50 young people attended a special youth-led interactive event at the BT Centre, welcoming 100 policymakers from across a range of sectors to discuss the question "How can we support young people to show respect and digital empathy online?". In the morning the pupils hosted Margot James, Minister for Digital and the Creative Industries, and BT's CEO Gavin Patterson.
In Cardiff, pupils from St Mary the Virgin Church in Wales Primary School opened a special event at the Pierhead, where Kirsty Williams, Cabinet Secretary for Education, announced the winners of a special Safer Internet Day competition run throughout Wales.
In Edinburgh, Minister for Childcare and Early Years, Maree Todd and the UK Safer Internet Centre visited Holy Rood RC High School.
In Antrim, the UK Safer Internet Centre joined the Education Authority's livestreamed event featuring winning entries and finalists from their online safety video competition.
Resources and films for educators
To help teachers and educators to celebrate Safer Internet Day with children and young people, we created a range of Education Packs. These packs were tailored for 3-7s, 7-11s, 11-14s, 14-18 year olds, and included lesson plans, assembly presentations, quick activities and more to help engage young people in SID activities. We also created a pack for parents and carers to help them talk to their children about online safety which included activities, talking points and pledges for families to use together. The Safer Internet Day educational resources were downloaded 815,205 times.
To complement our Safer Internet Day Education Packs, we also created a series of SID TV films again aimed at 3-7s, 7-11s, 11-14s, 14-18 year olds, and parents and carers. The video content included puppets, advice from young people and discussions with parents. In total, our videos were viewed over half a million times across YouTube, Vimeo, Facebook, Twitter and Instagram.
#SID2018 on social media
In the UK, the #SID2018 hashtag was used 49,623 times – including by high profile supporters such as the Prime Minister – and trended throughout the day on social media.
To kick start the day of trending, we had a mass social media post go out via Thunderclap at 8.30am on the 6 February, with 953 supporters having a social reach of over 9.1 million people.
Our #ItStartsWithUs social media campaign encouraged people to make a pledge to make the internet a better place. We provided our supporters with a template jigsaw piece where they could write messages, tips or create a design to show how everyone can work together to make the internet a better place. The hashtag was used 3,429 times, with a reach of 29,669,298 people. 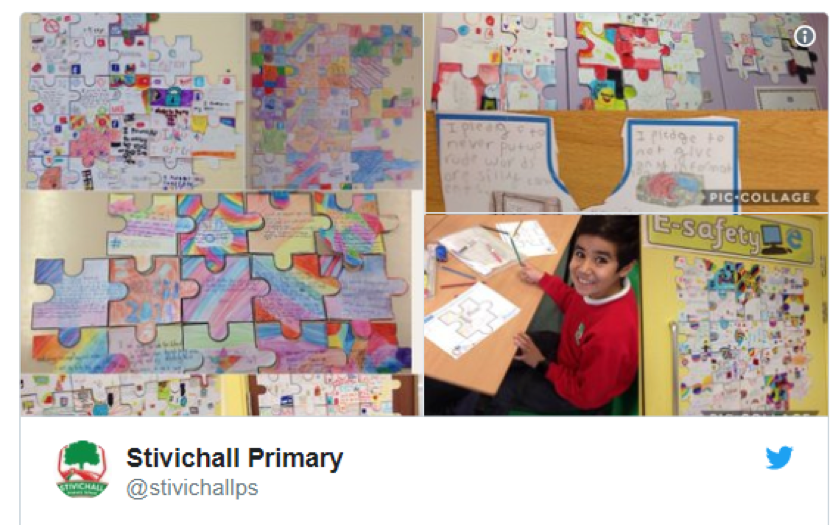 #ItStartsWithUs pledges
SID in the media
Safer Internet Day had 762 mentions in the UK media (mainstream and alternative), with coverage in national broadcasts and media such as BBC, Huffington Post (UK) as well as across a variety of regional TV and radio broadcasts and newspapers.
New research was released by the UK Safer Internet Centre on the day, Digital Friendships: the role of technology in young people's lives, which surveyed 2,000 young people aged 8-17 across the UK. The findings highlighted both the positive and negative role that technology can play in young people's relationships and that while they are proactively helping to build a better internet, they also want support from the adults in their lives to do so.
Impact of the day
As a result of this collective day of action, we reached 45 per cent of UK children aged 8-17 years and 30 per cent of UK parents.
Children and young people
Out of the 45 per cent of 8-17 year olds who had heard of Safer Internet Day, 58 per cent talked to their parent or carer about using the internet safely. Just over 8 in 10 (81 per cent) of 8-17s who had heard about the day said they felt more confident about what to do if they were worried about something online, with 80 per cent saying they learnt about safety features online such as reporting and privacy. Almost 1 in 5 (18 per cent) of 8-17s spoke to someone about something that had been worrying them online.
Parents
Of those parents and carers that had heard of Safer Internet Day, 74 per cent talked to their child about using the internet safely (up from 63 per cent last year) and 30 per cent spoke to someone about concerns they had about their child.
Teachers
A survey of 182 teachers who participated in Safer Internet Day across the UK revealed that more than 2 in 5 (41 per cent) of teachers said that their involvement in Safer Internet Day led to disclosures about potential safeguarding issues online. More than 3 in 5 (61 per cent) said it helped encourage conversations about the safe use of the internet between the school and parents, and over three-quarters (76 per cent) said it helped staff feel more confident with dealing with online issues.
Safer Internet Day clearly had a huge impact across the UK and was an inspirational moment in the year, showcasing the positive power of technology and how we can all come together to make the internet a better place for all.
See the UK Safer Internet Day profile page for further information.
Find out more about the work of the UK Safer Internet Centre (SIC), including its awareness raising, helpline, hotline and youth participation services.
Images copyright of the UK Safer Internet Centre.

Safer Internet Day 2019 in the UK: "Our internet, our choice"

The UK Safer Internet Centre has created a range of new educational resources to support educators for Safer Internet Day 2019 which is taking place on Tuesday, 5 February.

Will Gardner, CEO of Childnet and a Director of the UK Safer Internet Centre (SIC), looks at the success of the Childnet Film Competition Finalists' Event.

South West Grid for Learning (SWGfL), a partner in the UK Safer Internet Centre (SIC), has recently published a report that explores what causes young people upset online. The report is the second in a series titled "Young people, internet use and wellbeing in the UK". Compiled by Professor Andy Phippen from Plymouth University, the series explores the role of technology on young people's wellbeing. Each report in the series will have a specific area of focus, such as gender, age differences, and what harmful content means to young people. It assesses data provided by more than 8,200 young people from the ages of 9 - 18 across over 100 schools in the UK.

On Tuesday, 6 February 2018, we celebrated the 15th edition of Safer Internet Day. With a theme of "Create, connect and share respect: A better internet starts with you", the day called upon all stakeholders to join together to make the internet a safer and better place for all, and especially for children and young people.

SaferNet Brasil and the Brazilian Internet Steering Committee (CGI.br/NIC.br), with support from Facebook, Google and Telefonica, and in partnership with UNICEF, the Federal Prosecutors Office, Twitter and other Brazilian organisations, recently celebrated Safer Internet Day for the tenth time in Brazil.