Safer Internet Day (SID) was celebrated on Tuesday, 6 February 2018 right across the globe. With a theme of "Create, connect and share respect: A better internet starts with you", the day called upon all stakeholders to join together to make the internet a safer and better place for all, and especially for children and young people. Here we hear from the Jordan Safer Internet Day Committee on how they marked the day.

Since the introduction of e-learning into the education system, there has been an exponential increase in the use of the internet among school students. Consequently, it is important to increase knowledge and attitudes about computer and internet usage among them in Jordan to protect them from the risks of misuse. Therefore, the Andalusia Foundation and Umniah, in partnership with the Ministry of Education, launched the National Competition for Digital Citizenship on 6 February 2018 in Amman, Jordan. The aim of this cooperation was not only to reinforce its supportive role in the local community, but also to effectively partner with local and international organisations to support positive values and principles among the students. Moreover, the National Digital Citizenship Competition is the biggest Jordanian initiative to encourage teachers and students to use technology positively and responsibly.

The National Competition for Digital Citizenship

The competition is part of the strategic partnership between the Andalusia Foundation and Umniah which is being executed at Umniah's entrepreneurship and innovation centre, The Tank. The partnership, which began in July 2017, saw the Andalusia Foundation launch the SAMT programme that aims to instill and reinforce high moral values among school students. This initiative seeks to provide a safer and more reliable environment on the internet while increasing awareness on the importance of responsible use of the internet. The national digital competition focuses on directing teachers to raise awareness among students on appropriate and responsible behavior when using technology and social communication methods; measures that reinforce digital etiquette among students and teachers alike.

The competition launch, which took place at The Tank, was held in the presence of the Head of the Andalusia Foundation, Baraa Al-Dibs, Umniah's Director of the Digital Transformation Department, Riyad Kurdi, and the Undersecretary for Educational and Technical Affairs at the Ministry of Education, Muhammad Okour, in addition to a number of officials and stakeholders. The launch of this national competition coincided with the observance of Safer Internet Day (SID) 2018, with the theme of "Create, connect and share respect: A better internet starts with you".

Safer Internet Day
Safer Internet Day (SID) is a global initiative held every February since 2004, with the support of the European Commission. In Jordan, the Safer Internet Day (SID) initiative is headed by the Andalusia Foundation. Speaking of the initiative, Kurdi said, "Umniah continuously works to be a real and effective partner in the Kingdom through its targeted support for superior initiatives that aim to reinforce positive behaviour and values in the country." He went on to add that the national competition for digital citizenship is an example of the outstanding initiatives supported by Umniah, a company that dedicates its capacities to further growth and sustainability in the country. Furthermore, Kurdi noted that the competition's objectives are to direct teachers and students to the wise and safe use of information posted on the internet, in addition to reinforcing educational values, and principles during online time, including respect for others, the preservation of privacy, the importance of intellectual property and authorship rights, and the risks of incorrect internet usage. Speaking on behalf of the Andalusia Foundation, Dibs said, "This competition reinforces positive values and helps instill moral principles and authentic values in our children while enabling and motivating teachers to undertake their roles as protectors of a new generation armed with education, culture and principles. We also hope to help them build their personalities based on values and self-esteem, while integrating them positively in their societies in a good way. Our aim is also to shape a generation of conscious youth with a commitment to digital citizenship as a basis for constructive education, motivating them and giving them the opportunity to spread good values in their communities".

The Ministry of Education, represented by Okour, welcomed the initiative by the Andalusia Foundation, which will have a tangible effect on society by creating guidelines for behavioural standards during internet usage, as well as preserving privacy, respecting opinions, maintaining intellectual property and authorship rights, as well as addressing the risks of unsafe internet use and its legal repercussions. Okour stressed, "There is a strong strategic partnership between the Ministry of Education and Umniah through joint projects and programmes, including the implementation of the largest electronic connection project in the Kingdom for a large number of government schools as well as the safer internet project. We, here at the Ministry of Education, are eager to see this competition spread to all the country's governorates".

Andalusia Foundation
The Andalusia Foundation is an independent, not-for-profit educational foundation with objectives that are dedicated to increasing morals throughout the world. To achieve this, the foundation concentrates on enriching the internet's positive moral content, motivating individuals and groups to adopt the concept of "Moral EntrepreneurshipTM", to provide a civilised humanitarian and societal model, and to build the digital citizenship generation, aiming to achieve these objectives through programmes and international partnerships to provide an effective moral model. 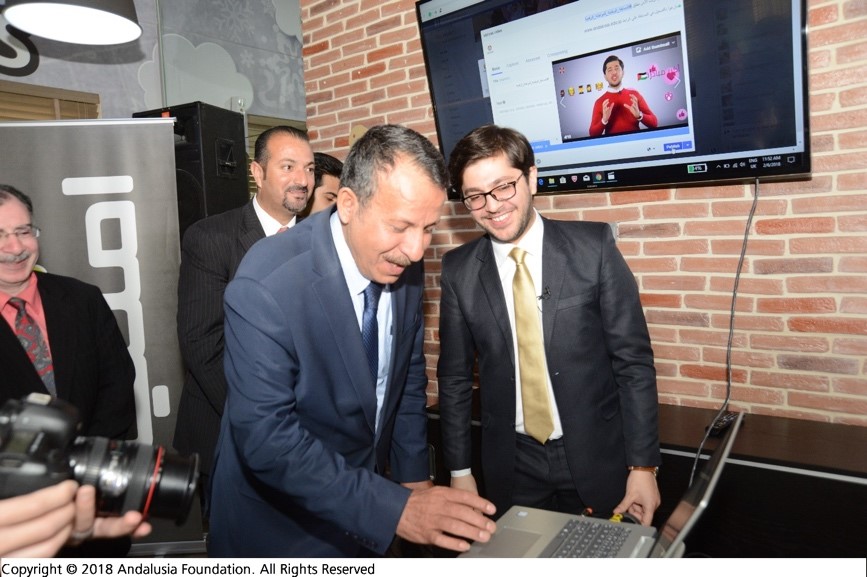 It is necessary to provide awareness and education for student in Jordan. Thus, several institutions cooperate to create a conscious generation that can use the internet safely. Andalusia Foundation is planning to extend and develop its efforts next year in celebration of Safer Internet Day 2019, which will take place on Tuesday, 5 February 2019.

In Slovakia, the Safer Internet Day (SID) 2018 event was organised by eSlovensko and Child safety line (LDI) with a localised theme of "Sexual abuse of minors - Who's next?". The main partner of the event was the Ministry of Interior of the Slovak Republic.

The Sultanate of Oman, represented by the Information Technology Authority (ITA), joined the rest of the world in celebrating Safer Internet Day recently, which this year took place on Tuesday, 6 February 2018. More than 140 countries celebrated this international day, with events and activities taking place under this year's theme of "Create, connect and share respect: A better internet starts with you".