Creative workshop: a format for cooperation between the Safer Internet Youth Forums of the Baltic Countries

For three years now, Lithuania has hosted the Safer Internet Youth Forum partially funded under the framework of the Connecting Europe Facility (CEF) as part of the European Commission's Better Internet for Kids strategy.

National Safer Internet Centres (SICs), dedicated to the involvement of children and young people in the creation of a safer online environment, have been established in thirty member countries of the European Union under the Facility. Together with its partners, the Centre for Information Technologies in Education, coordinating the Lithuanian Safer Internet Centre, has followed European best practices in developing the Safer Internet Youth Forum and encourages young people to be active in creative activities on and about the internet.

Visual formats, such as photos, videos and video blogs, are the most appreciated by contemporary youth. In 2017, participants in the Safer Internet Youth Forum created a number of video reports, films, and social advertisement videos as part of a creative workshop which took place in August 2017 in Vilnius.

The youth primarily shared good practice of the youth activities in Lithuania, Latvia and Estonia – click on the country links to see video resumes of their work. 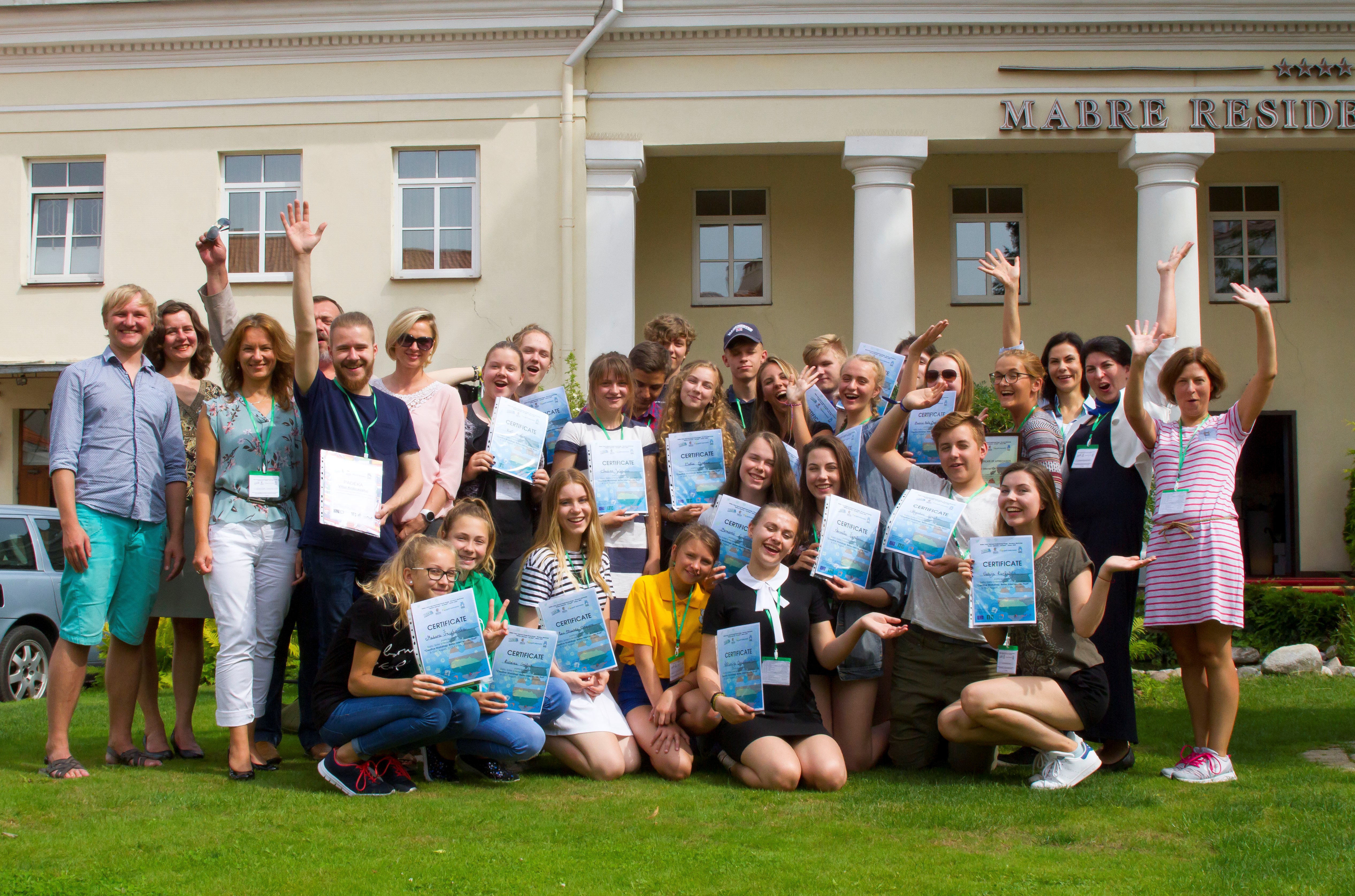 The activities associated with the creation of the social advertisements took place in various inspiring locations of Vilnius city. Discussion of the ideas and prospective video topics took place in an informal setting surrounded by the Belmontas landscape at the Filaretai Hostel, where the overseas participants stayed for the duration of the workshop. Film pre- and post-production activities took place at the Martynas Mažvydas National Library of Lithuania providing access to an event space, art space, cinema room and image processing room, allowing the young participants to work using professional film production and post-production equipment. The final day of the creative workshop featured an interactive educational programme at the Centre for Civil Education, including an overview excursion around the exhibition and educational tasks for the creative workshop participants.

A formal awards event was held later that day at the Mabre Residence Conference Hall, where all of the authors of the social advertisements were awarded. Reflections on the films were shared by several experts, namely:

An overview of all of the creative workshop activities is presented in the video tutorial, while the social advertisements created by mixed teams from the Baltic countries can be viewed here:

Join the Lithuanian creative team of the Youth Forum under the Baltic Safer Internet Project on Facebook at @sijfLT.

Find out more about the work of the Lithuanian, Latvian and Estonian Safer Internet Centres (SICs), including their respective awareness raising, helpline, hotline and youth participation services.

In April 2018, the Latvian Safer Internet Centre (SIC) organised a comprehensive diagnostic test to assess third and sixth grade pupils' knowledge about online safety, media literacy and critical thinking. In total, 420 schools across Latvia took part in the test, which is more than 60 per cent of all schools in the country.

Looking back at Code Week 2017 in Lithuania

This year, Code Week in Lithuania was celebrated with almost 100 events across the country. From 9-22 October 2017, events of various sizes took place at a variety of locations ranging from the national conference #SWITCH! gathering 15,000 participants with a special focus on medtech and fintech, to local events in schools of remote areas such as Utena city.

Get Online Week celebrated in Lithuania for the eighth time

The European Get Online Week (GOW) is an annual digital empowerment campaign that engages and encourages people to use technology and the internet with confidence and with skills that allow them to benefit from the world of online opportunities. Supported by corporations, NGOs and public authorities, the campaign is organised each year in March by Telecentre Europe, an umbrella organisation that represents European networks of ICT learning centres.