The most recent data collection covered the period from July to September 2017 inclusive and saw 9,695 contacts which all related to online issues. This was a reduction on the previous reporting period (11,573) but reflects the summer holiday period when some helplines also reduce their opening hours. Pupils are away from school and, for some, this means that they are also away from some of the challenges that they might face online.

Contacts to helplines during the reporting period were categorised as follows: 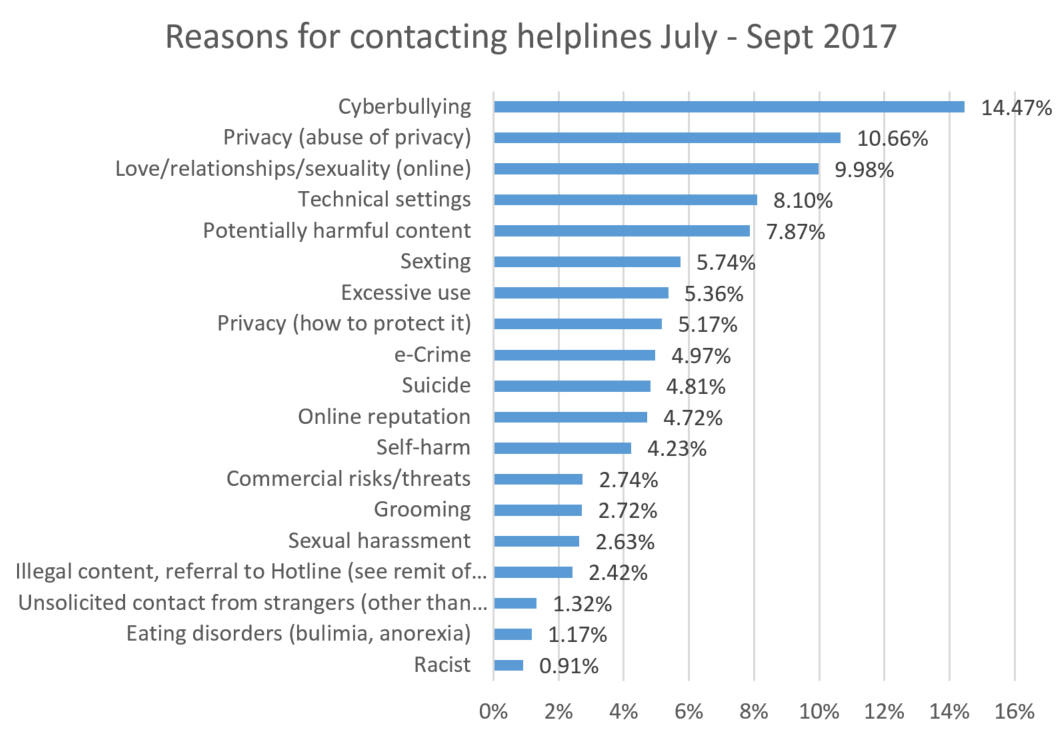 Once again, cyberbullying remains the issue which helplines are dealing with most often with around 14 per cent of calls relating to this. One particular app, Sarahah, was cited in cyberbullying cases by a number of helplines. This is an anonymous app that was originally set up as a business tool, based on the concept that workers can use it to leave anonymous feedback/constructive criticism for their colleagues and senior managers. The ability to be able to do this anonymously means that some users feel they can be quite honest, or even fairly brutal, in what they say. Unfortunately, this has been picked up by a number of young people (often in schools) who have used it to say unpleasant things about their peers and teachers. For further information, see the Guide to online services entry on Sarahah on the Better Internet for Kids (BIK) portal.

Privacy concerns are categorised in two ways: abuse of privacy and how to protect privacy. The combined number of contacts for both types of concern surpass the number of contacts related to cyberbullying and demonstrate there is real concern around privacy and how to manage it online. It could be argued that some of the calls concerning abuse of privacy could also be classed as cyberbullying; helplines rely on the judgment of counsellors to decide how to categorise individual calls. Some helplines commented on the complex nature of both privacy settings and terms and conditions which were too complicated for (young) people to understand and engage with.

Most callers use the phone to make contact, although 43 per cent are using online communications technology to ask for help. Contacts via chat services account for 24 per cent of all contacts whereas in the previous reporting period only 5 per cent of contacts were made in this way.

Other key findings include:

17 per cent of the calls received by the helplines from 31 European countries in 2015 concerned cyberbullying with relationships online coming second, being the focus of over 11 per cent of calls.

Safer Internet Centres in Europe typically have a helpline (as well as an awareness centre, hotline and youth participation team).