With the growing number of mobile internet users, the app offers a user-friendly way to report illegal content directly from mobile phones or tablets. The sharing feature enables users to copy internet addresses easily without storing illegal or harmful content on the mobile phone, which may possibly lead to violating a national law. In conjunction with introducing the mobile app, CZ.NIC also has redesigned the hotline website. 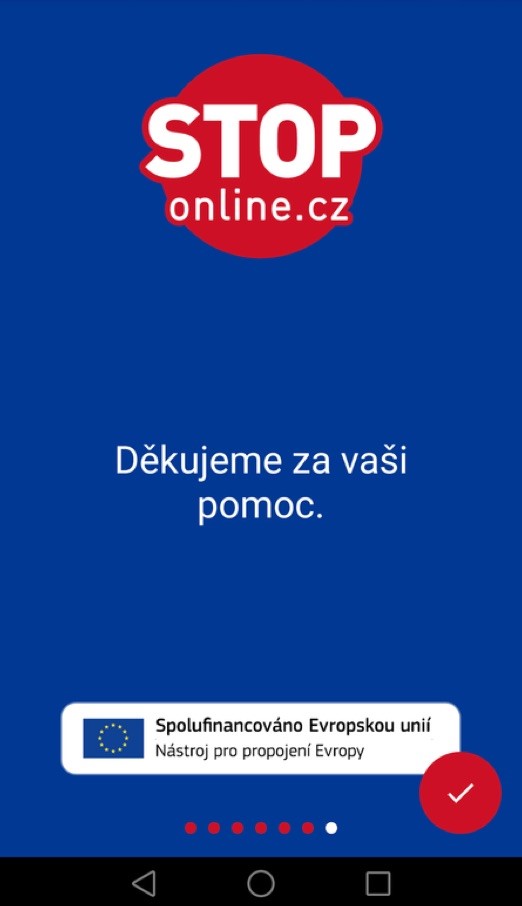 The Android app was developed under the creative common licence and so, in case of interest, is available for localisation by other hotlines in Europe.

Find out more about the work of the Czech Safer Internet Centre, including its awareness raising, helpline, hotline and youth participation services.

Find out more about the work of internet hotlines on the INHOPE website.

Looking back on a decade of safer internet activities in Czechia

As 2018 draws to an end, it's a good time to reflect on how far Safer Internet Centres (SICs) have come. Next year marks the start of a new two-year funding period for Safer Internet Centres in Europe, under the EC's Connecting Europe Facility (CEF), building on previous funding cycles in creating a safer and better internet for Europe's children and young people. While the National Safer Internet Centre (NCBI) in Czechia will be ending its engagement in the Safer Internet project and handing over the baton to a new project consortium, it looks back over the last decade of its involvement and summarises what has been achieved…  and what it will pass on to its successors.

Martin Kožíšek, from Association CZ.NIC, administrators of the Czech hotline, presents the conclusions of a Seznam.cz survey on young people and sexual offers on the internet.

#Dayoffline and the #SaferInternet4EU campaign

In 2018, the Czech Safer Internet Centre (SIC) launched the #Dayoffline campaign in partnership with Czech online media portal Flowee, with the aim of raising awareness about screen time addiction among young people.

Children's rights in the digital age

Each year, on 20 November, we celebrate Universal Children's Day. The day is linked to the Convention on the Rights of the Child and was first proclaimed by the United Nations on 20 November 1989 – long before the current digital era!

Here on the Better Internet for Kids (BIK) portal, our aim is to provide a multi-stakeholder platform showcasing a range of viewpoints and experiences on keeping children and young people safe online. As such, we welcome guest blog posts on our areas of focus. We were recently contacted by Helen, a freelance writer and mother, passionate about ensuring a future where her boys can safely navigate the internet. Here, she talks about the importance of promoting internet safety on mobile devices.

INHOPE, the International Association of Internet Hotlines, held its second members' meeting of the year in Lisbon on 3-5 November 2015. Hosted by the Fundação para a Ciência e a Tecnologia (FCT), the three-day conference was attended by delegations from over 40 countries.

European Schoolnet (host organisation of Insafe), together with Liberty Global, has created an animation aimed at educating parents on children's safety online: The Digital Universe of Your Children. Here, the resource has been translated into Czech.