Safer Internet Day celebrations in the Czech Republic started with a press conference at the Representation of the European Commission (European House) in Prague on Tuesday, 7 February 2017. Next year, the EU's General Data Protection Regulation (GDPR) has to be implemented in Czech national law. Based on that, the Czech Safer Internet Centre (SIC CZ) defined the main localised theme of SID 2017 as "Protecting your data - you protect yourself, your family and friends".

JUDr. Miroslav Antl, Senator of the Czech Parliament, Chairman of the Committee on Legal and Constitutional Affairs and Honorary Chairman of the SIC CZ Advisory Board, opened the conference pointing out the importance of secure privacy and proper implementation of law in online safety.

Mgr. David Chovanec, Director of the Security and Prevention Dept., Ministry of Interior, explained the role of the Ministry of Interior, which is preparing the new law regulation reflecting the requirements of the transition of the GDPR. Mgr. Josef Prokeš, Director of the Civic Section of the Office for Personal Data Protection, spoke about the role of his office in the protection of personal data.

Gabriella Cseh, Head of Public Policy for CEE at Facebook, was a special guest of the press conference. She introduced the new Facebook privacy check application and several other features focused on better protection of users, among them for instance the new Family Safety Centre and Privacy Basics. 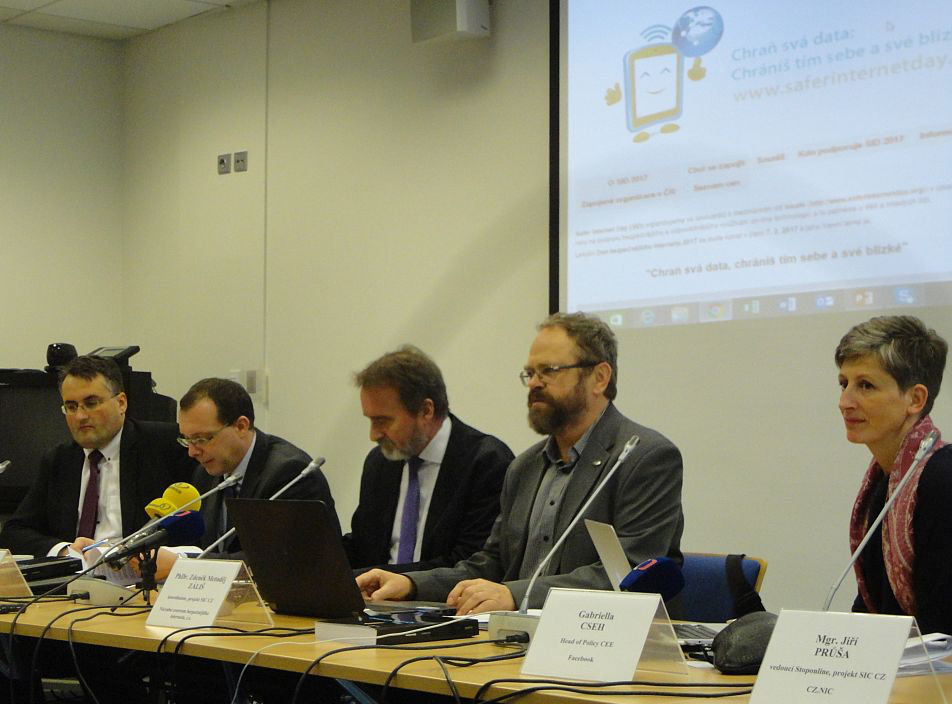 During the event, two nationwide competitions were announced. The first was the traditional competition for schools and public libraries who contribute to the SID campaign organising their own events and activities on the occasion of SID while using the SID 2017 logo and actively promoting the Safer Internet Day message. The other was the creative competition for children called BEZIP (www.iBezip.cz) to present their understanding of personal data protection rules.

During Safer Internet Day, two additional major events took place in Praha. The first one was the final of the student competition and follow-up conference of the Regions for Safe Internet project (www.kpbi.cz). Mrs. Cseh took part in the conference and awarded the winners of the competition with small gifts from Facebook. The other conference, "Security of networks and services", dedicated to SID 2017, was organised by CESNET at the Technical University of Prague and attended by more than 300 students and ICT professionals. Many other events took place around the whole country.

Find out more about Safer Internet Day in the Czech Republic on the main SID website, while further information is available at www.saferinternetday.cz.

Find out more about the work of the Czech Safer Internet Centre, including its awareness raising, helpline, hotline and youth participation services.

June marks the start of the summer months, children receive their school certificates and are preparing for vacation time. Many schools want to strengthen children's resilience so that their holidays aren't just interesting, but safe also. In Czechia, the National Safer Internet Centre (NCBI) (part of the Czech Safer Internet Centre (SIC)) has responded to these wishes by organising a series of seminars for children on safer use of the internet and online technologies.

Making rules is easy. But what about following them?

Following Safer Internet Day 2017, we've heard from a number of SID Supporters on how they marked the day. Here, Silja Nielsen, Head of Community and Safety at Momio, comments on their actions for a better internet.