An inspirational Safer Internet Day reaches millions across the UK

As part of our ongoing roundup of Safer Internet Day (SID) 2017 activities across the globe, Will Gardner, a Director of the UK Safer Internet Centre and CEO of Childnet has written a blog on the amazing impact of SID across the United Kingdom.

We at the UK Safer Internet Centre have been inspired by the extraordinary range of actions and activities that took place right across the UK. Our supporter list had a staggering 1,600 organisations, schools, police forces, government, companies and charities who registered in support of the day, beating all previous records. Our educational resources were downloaded several hundred thousand times, SID TV was viewed in record numbers and thousands played our quiz.

The fact that so many embraced the day was clear in our interactions in youth events across the country, as well as on social media. The day begun with #SID2017 trending on Twitter and when our Thunderclap went out at 8:30 am, reaching over 7.7 million people, we knew that this was going to be the biggest Safer Internet Day yet. You can have a look at some of the highlights from the #giveasmile social media campaign which certainly made us and the internet smile. It's fantastic to see so many young people use technology so creatively and positively with films, images, boomerangs and even raps being created, all to give a smile!

Safer Internet Day was covered in national and regional media and backed by a range of celebrities including former Olympic gymnast Beth Tweddle, James McVey of the Vamps, actor Danny-Boy Hatchard and historian Dan Snow. 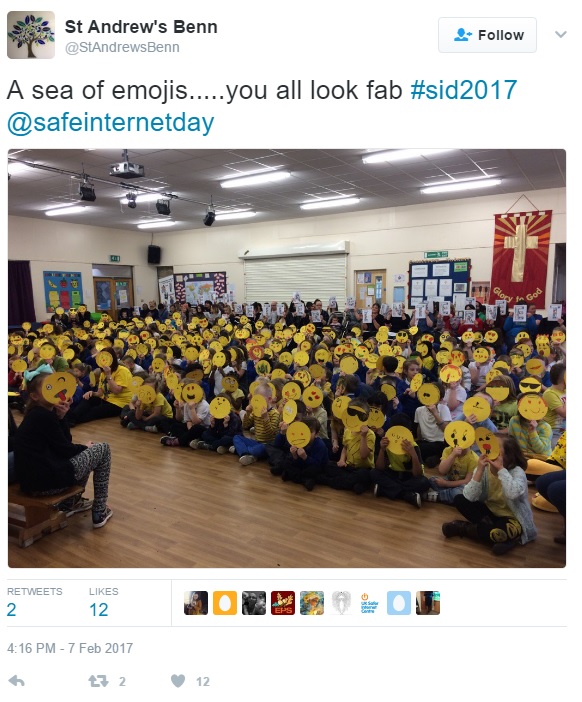 Youth events across the country – England, Scotland, Wales and Northern Ireland
Our new research about the role and influence of online images and videos on young people was launched, highlighting the central role they play in digital youth culture. The findings from the report were further discussed in our London event at the BT Centre by our youth panel, chaired by BBC Click journalist Kate Russell. Young people eloquently described and discussed how images and videos play an important role in their lives, addressing the pressures of maintaining a perfect image online, critical thinking as well as how technology was a powerful and creative outlet for them. 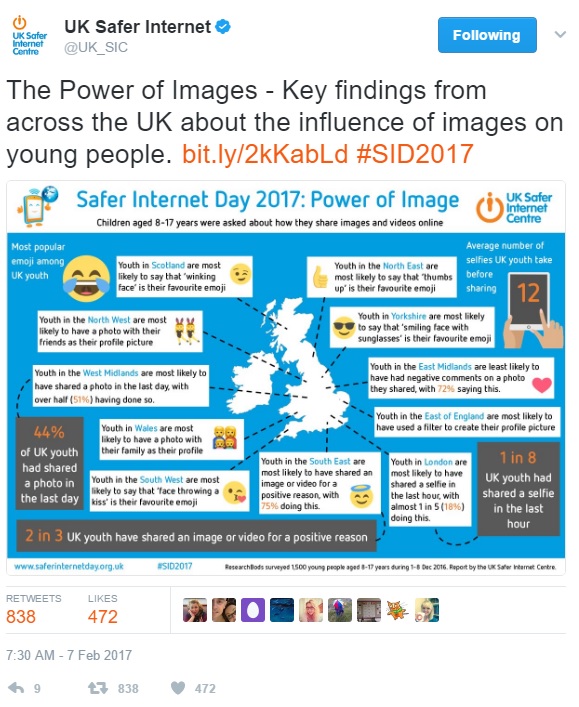 The overall event was a great success where young people who had created images as part of our youth photo campaign took the guests on interactive tours of their photos before the panel discussion. Baroness Shields, the Prime Minister's Special Representative on Internet Crime and Harms and Tracey Crouch, Minister for Online Safety attended the event, hearing directly from the young people about their thoughts on being safe online and the power of images. The energy and enthusiasm of the young people was contagious and they confidently engaged everyone in a number of interactive activities including emoji charades, taking photos with the SID Snapchat geofilter, livestreaming and human bingo! 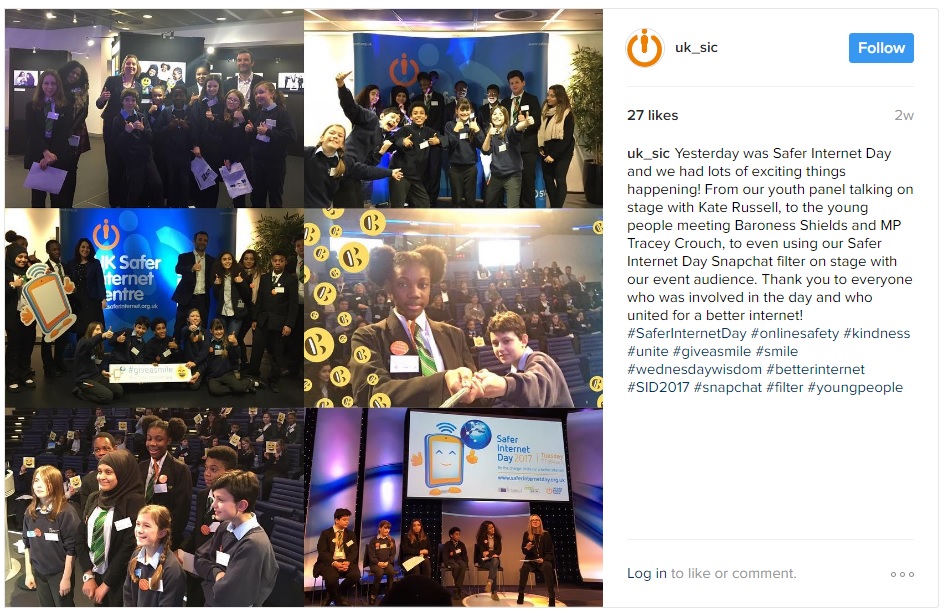 In Scotland, Derek Mackay MSP, Cabinet Secretary for Finance and the Constitution visited Dunbar Grammar School to hear from their pupils who had been involved in the Safer Internet Day youth photo campaign.

In Northern Ireland, we joined an event where C2k, the Educational Authority and Safeguarding Board for Northern Ireland, broadcast live videostreams which were available to all schools across Northern Ireland. The streams involved young people who had taken part in a film competition and also announced the winners, Fairview Primary School and Holy Trinity College Cookstown.

While at a youth event at the Senedd, the Welsh Government announced a student from Bryn Celynnog Comprehensive School from Beddau as the winner of the national online safety logo competition. The event was delivered in partnership with the UK Safer Internet Centre, along with an exhibition of images created by local schools, attended by Kirsty Williams, Cabinet Secretary for Education and other assembly members. 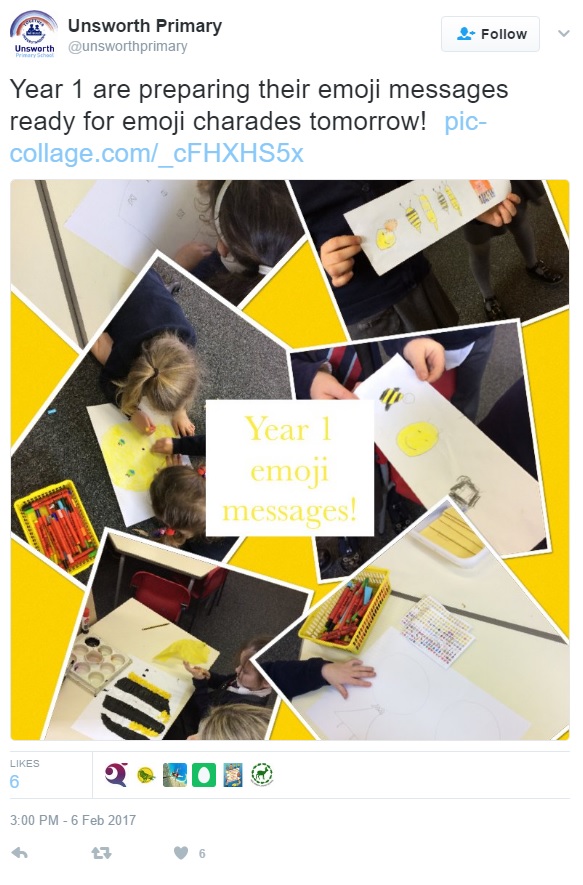 Impact of Safer Internet Day
We are delighted that Safer Internet Day 2017 has reached more people across the UK than ever before, hopefully inspiring many conversations and actions in schools and homes. Currently, we are compiling numbers on exactly how far-reaching the impact of the day was on young people and their families. We hope that our educational resources and films will continue to be used to engage young people to think and learn about how to be safe and positive online.

It's clear to us that we could not have done this without the incredible support and collaboration of everyone who came together to be the change and unite for a better internet. Thank you so much, we hope this day provides the impetus and inspiration to continue the momentum through 2017 and we look forward to Safer Internet Day 2018!

Find out more about Safer Internet Day in the UK.

Find out more about the work of the UK Safer Internet Centre, including its awareness raising, helpline, hotline and youth participation services.

This article was originally published on the UK Safer Internet Centre website and is reproduced here with permission.

UK showcases the power of image on SID 2017

For Safer Internet Day 2017, the UK Safer Internet Centre launched a report into the role and influence of images and videos in young people's digital lives. Read more here.

As part of our ongoing roundup of activity across the globe to celebrate the 2017 edition of Safer Internet Day, here we hear from our colleagues at the UK Safer Internet Centre on how football clubs in the country got behind the campaign.

Safer Internet Day (SID) was celebrated on 7 February 2017 right across the globe. With a theme of "Be the change: Unite for a better internet", the day called upon all stakeholders to join together to make the internet a safer and better place for all, and especially for children and young people. Here we hear from our Hungarian Safer Internet Centre (SIC) on how they marked the day.