In particular, three types of gruesome chain letters can be found: 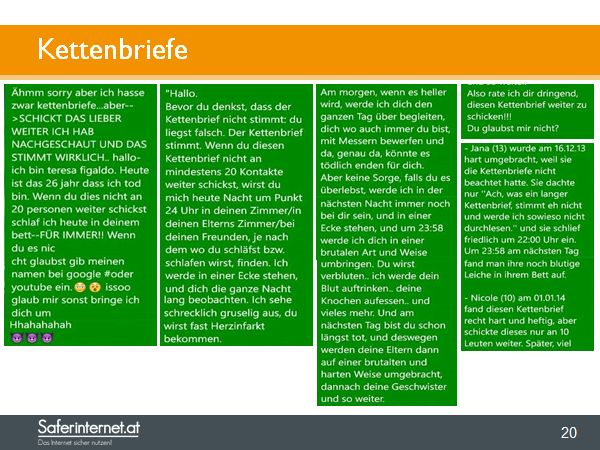 Chain messages are also used to spread fraudulent messages or malware. In the case of special events (for example, killer clowns before Halloween 2016), ‘warnings' are spread via chain messages, so causing extra fear among kids.

Saferinternet.at, the Austrian Safer Internet Centre (SIC), has reacted to this trend by including it in its training programmes for this age group. Discussions include who might be producing such content and what their motivation might be, and rules for classes are being established (which messages can be spread, which should not be passed on, and so on).

Some special classroom activities have also been developed, for example in maths classes:

"Anna receives a chain message via WhatsApp. This message is quite frightening, so Anna passes the message on to Lara, Tom, Jonas, Valentin and Adrian. They are also frightened, so they pass it on to another five people each. Anna's teacher realises that this chain letter is being spread in class. She tells the class not to pass it on any further and to delete the message from their phones. How many children, at least, received the message?"

During a training session, it became obvious that it is not enough to just reflect on chain messages, but also to offer the possibility for kids to calm themselves further. While it became apparent that kids are quite aware that chain messages are rubbish and lies, this knowledge might not help if they cannot sleep during night. They need their parents to take their concerns seriously and help them to fight the fear immediately. If that's not possible, it's likely they will pass the message on. That's the reason why Saferinternet.at implemented the ‘chain message phone' under the slogan "Send us your chain message, we count for more than 20 people". Hopefully this will help kids to sleep better in the future! 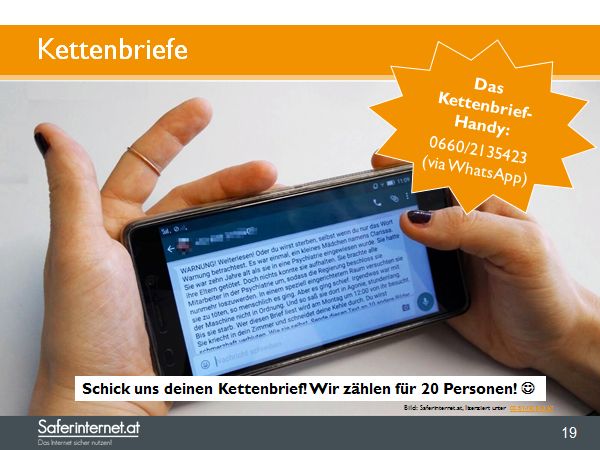 Further information is available on the Saferinternet.at website as follows:

Today, 92 per cent of Flemish youth (12-18 years old) have their own smartphone. For them, it is their most important digital device. Young people use their smartphone in a very multifunctional way: to follow current events and to discuss homework, but also to game, stream music, and to chat. With this, smartphones slowly suppress game consoles and MP3 players.