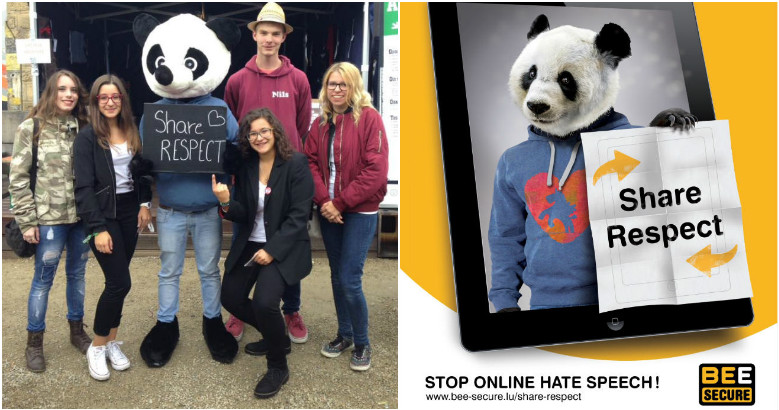 Starting in October 2016, BEE SECURE, the Luxembourgish Safer Internet Centre (SIC), will campaign against online hate speech throughout the current school year and support the No Hate Speech Movement of the Council of Europe.

With the slogan ‘Share Respect – Stop Online Hate Speech!', the campaign will focus on the notions of hate speech and respect. What is hate speech, how can I recognise it and how is it different from a legitimate opinion? What is respect and how can I learn to communicate in a respectful manner? Another focus is the fight against hate speech through reaction and prevention: how and where can I report online hate speech? What techniques can I use to counter hate speech in social networks? These questions will be addressed on a  monthly basis with more detailed information about techniques which can be used to challenge hate speech or about specific forms of discrimination such as sexism or racism.

The target group are mainly children and young people, but also teachers and parents, who play an important role in the prevention of hate speech. The campaign material can be found online, but a lot of the work will actually be done on the ground, in schools, youth houses and at public events. While the campaign is using traditional campaign material such as leaflets and posters with a panda mascot for quick recognition, some gadgets will be used to let the message stick: bracelets and temporary tattoos to remind the youngsters to share respect and to stand up against online hate speech. Panda masks or panda figurines complete the campaign material and a life-sized panda mascot will attract the audience's attention at public events. The first public appearances have already been a big success and showed that using the panda as a mascot has been a wise decision.
All campaign material is available in French and German on the BEESECURE website.
Find out more about the work of Luxembourgish Safer Internet Centre.

Who are the Creators for Change?

According to a No Hate Speech Movement survey, 83 per cent of users have already encountered hate speech online. In an online world full of challenges and risks such as these, promoting positive messages among young people who are influenced by radical ideas such as hate speech and extremism may seem ambitious.

Prague, 18 November 2016
European Schoolnet's EMINENT 2016 Conference under the theme 'The Quest for European Digital Citizenship' took place on 17-18 November, in Prague (Czech Republic).
European Schoolnet, the network of 30 European Ministries of Education, is committed to supporting young people's active and participative digital citizenship, through helping them develop the knowledge, skills and attitudes needed to thrive in today's digital society.

Safer Internet Forum (SIF) 2016 will take place on Thursday, 24 November 2016 at Forum Geesseknäppchen in Luxembourg with a theme of 'Be the change: principles, policies and practices for a better internet'.

Over the past few years, society in Bulgaria has been affected by the ever-growing wave of aggressive, offensive and discriminative viewpoints, including xenophobia and racism. This flood of hate speech via online media, internet forums and social media has, on several occasions, spilled over into different forms of physical violence. Children are exposed to hate speech from a very young age due to their early entry into the digital world. An active campaign against online hate speech, especially that which directly involves or influences children and young people, therefore became one of the priorities of the Bulgarian Safer Internet Centre (SIC) in 2016.