Webinar on ICANN's role in shaping the internet for young Europeans 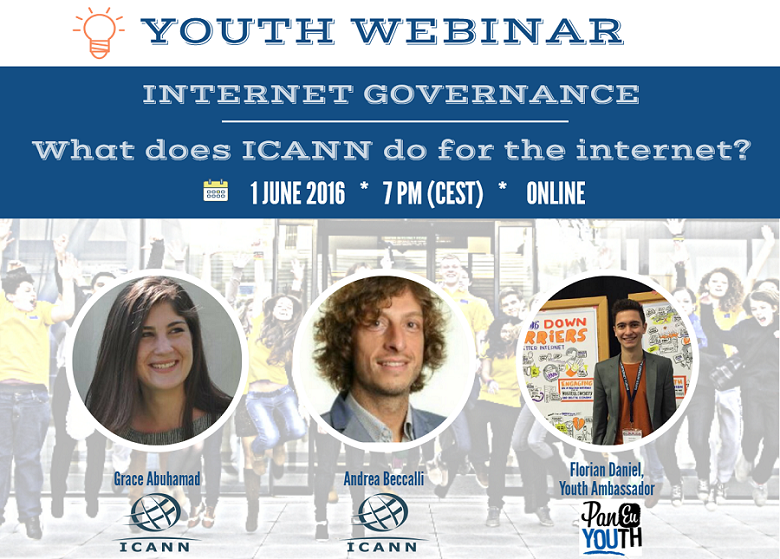 A second youth webinar titled ‘What does ICANN do for the internet?' took place on Wednesday, 1 June 2016. It was attended by 23 youth panellists from the Insafe network of Safer Internet Centres (SICs) and 3 Youth coordinators.

ICANN experts Grace Abuhamad and Andrea Beccalli gave a compelling and engaging presentation, taking young people on a tour of the history of the internet from its beginnings to the current day. Young people also learned about the role of ICANN and its coordination of the Domain Name System (DNS) and Internet Protocol (IP) Address Allocation, to name just a few of its functions. Additionally, Grace invited young people to learn more about ICANN and how the internet works, and to get involved in internet governance discussions through the ICANN Learn platform and the NextGen@ICANN initiative.
Florian Daniel, Insafe youth ambassador, who has had the opportunity to attend various national, European and international internet governance events, provided an inspirational testimonial of his involvement and participation in internet governance discussions. He invited young people who are interested to get involved and to identify national initiatives where youth participation is highly encouraged.
As with the first webinar, young people were invited to take a poll both before and after the webinar to collect views and feedback. Almost half of youth panellists are familiar with the concept of ‘internet governance' and they define it as ‘how to handle and approach topics which are necessary to keep the internet up and running for everybody' or ‘a multistakeholder approach' to run and ‘to develop the internet and how we make decisions'. When asked which stakeholder has the most influence on how the internet works, most of those who responded indicated the private sector as a major stakeholder, with governments and politicians coming next.
The webinars fit into a youth participation and engagement strategy that aims to incentivise young people to get involved in internet governance discussions on a more consistent and regular basis by acquiring the adequate knowledge and skills to both facilitate understanding and building of personal opinions on issues related to how the internet ecosystem works. For updates on future events and webinars for young people, follow the Better Internet for Kids portal at www.betterinternetforkids.eu and Twitter @Paneuyouth.

The Internet Corporation for Assigned Names and Numbers (ICANN) is a non-profit corporation with responsibility for Internet Protocol (IP) address space allocation, protocol identifier assignment, generic and country-code top-level domain name systems, and root server system management functions. ICANN meetings are held three times each year in different regions of the globe to enable attendees from around the world to participate in person.

The voice of youth: Back2School as good digital citizens

Hearing the views and the voices of youth is an important part of the work we do in aiming to create a better internet for Kids. As part of our Back2School edition of the BIK bulletin, we asked three of our youth ambassadors how they plan to be good digital citizens as they embark on the start of a new academic year. Find out how they responded.

Webinar on digital rights and citizenship for young Europeans

On Wednesday, 25 May 2016, youth panellists from across the Insafe network of Safer Internet Centres (SICs) are invited to attend a first webinar on digital rights and citizenship, entitled Digitally connected, digitally empowered – realising children's and young people's rights in a digital age and creating a better internet.