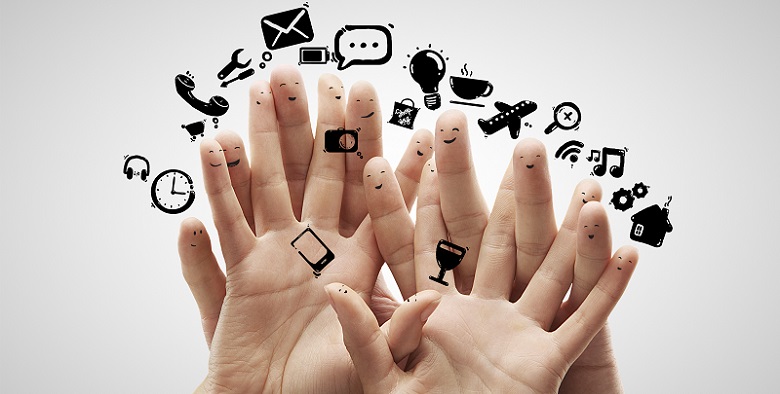 Your digital footprints often seem to be invisible, but what are you really agreeing to when confirming ‘Terms & Conditions' in an app? With the newly proposed General Data Protection Regulation (GDPR), it is as relevant as ever to put the spotlight on the data protection and the digital identity of youth.

The best way to enlighten and strengthen the critical mindset of young people is to engage them in an open dialogue. So that's what Safer Internet Centre (SIC) Denmark did during the month-long Safer Internet Day (SID) campaign. Pernille Tranberg, one of Denmark's leading experts in the field of online data protection and privacy, was invited into an online chat room where young people could ask any question that came to mind, as well as sharing experiences with each other. The title of the data protection chat was: "Can you be private on the internet?". 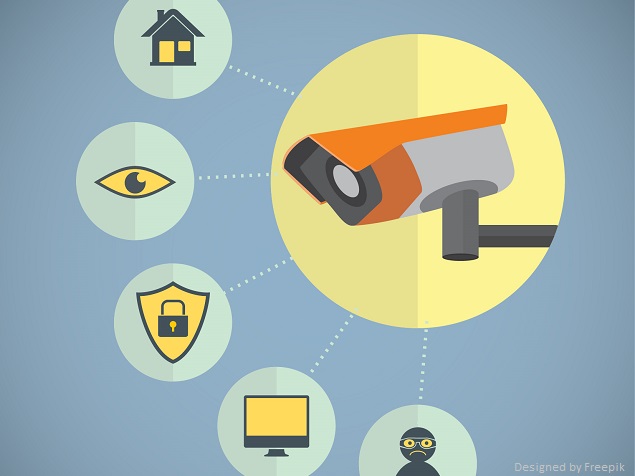 Image designed by Freepik
The whole month of February was dedicated to Safer Internet Day and the purpose was to engage adolescents, aged 13-18, in the debate on how to make the internet a better and safer place. The campaign took place in the helpline universe Cyberhus. Each week focused on a new topic, and week three was devoted to a debate on data protection and online privacy. Pernille Tranberg, supported by a Cyberhus moderator, hosted the chat. Pernille also supplied the campaign with articles on the topic.
‘Transparency on the internet' is about how every move on the internet is being tracked, saved and used, and why that can potentially be problematic. The article proposes that you limit what you share and, for example, use a pseudonym on social media. In the second article ‘Clean your digital reputation', Pernille encourages the reader to take control and offers tips on how to improve one's digital reputation; for example, be careful about sharing sensitive information like religious views, sexual and political orientation, health and financial situation. Another recommendation is about preventing burglary and identity theft: for example, don't post your date of birth, GPS location, travel plans, running/bike routes, and so on.
Pernille Tranberg is data ethical advisor, co-founder of the think tank ‘DataEthics.eu' and author. She has published six books including ‘Fake It' (2012, Peoples Press) on big data and digital self-defence and has co-written the booklet ‘License2Share' targeted teenagers and focussing on preparing their digital future.
Insight into the chat session
The chat room was open for three hours. In total, 17 young people between the ages of 12 and 19 participated in the anonymous chat. It was optional for participants to state their age and gender. Some joined from the start and others joined during the session. Some stayed in the chat the entire time, some left after a while, and some returned later in the discussion.
The chat started with a general discussion of the word ‘private', both online and offline, which was defined and interpreted in different ways. One participant did not relate personal information to ‘being private'. Most of the participants were aware of their privacy settings on, for example, Facebook. Some had private profiles while others had left their profiles open to the public because they did not see the need for making their profile private. Most of the participants agreed on the fact that they believed they were quite private on Facebook, and that grownups revealed more about themselves. One said: "It is actually mostly the grownups that share and write all kinds of things – especially on Facebook". Most of the participants had Googled themselves and were aware of their public digital profile – they also tried to maintain it, for instance, by removing pictures or closing old profiles on social media platforms.
Most of the participants were aware that online ads were targeted towards them, but they did not know the mechanism behind it. They were surprised how their whereabouts on the internet and, for instance, ‘likes' on Facebook were monitored and used for mapping their profile, so that ads can be customised and directed towards them. One 15-year-old did stand out from the rest and revealed that: "In general, I normally use ‘private browsing' where the browser does not save cookies, track my history, and so on".
Over the course of the chat, many topics were raised and Pernille offered a lot of advice and tips on how to protect your data, disguise your identity, use VPNs, and use alternative browsers to, for instance, the most popular one of Google. Data protection, online privacy and safety are all very complex topics and discussing them can be difficult. For many of the participants a lot of the information was new, and it was also the first time they had debated this topic. The 12 and 13 year olds had the least knowledge on the topic. The 15 year old mentioned above had an impressive knowledge, which he had gained on his own, just because he was interested in topics related to online privacy. Sometimes he advised friends and schoolmates on how to navigate the internet in a secure way. In terms of gender, there was not a difference in levels of knowledge. Considering the fact that most 12 and 13 year olds have profiles on different social media such as Facebook and Instagram, it's worth noting that this age group had the least knowledge and understanding of data protection and online privacy, so future awareness-raising efforts should be targeted this age group.
This Safer Internet Day campaign was a partnership between the Danish Awareness Centre and Danish Helpline.
Campaign: Safer Internet Day in 29 Days
The 2016 Safer Internet Day campaign in Denmark contained several online elements such as blogging, articles, videos and podcasts. Also, young people could, in short messages (maximum of 150 characters), share opinions and life hacks anonymously as well as participate in weekly group chats which each week focused on a different topic related to promoting a safer internet experience.
The group chat played an important part of the campaign as it was a platform for direct communication with the target audience. Four topics were on the agenda (in order): Digital welfare, Gaming, Privacy and security, and finally Marketing, blogging, user rights and cookies. Four different Danish experts with specific knowledge on the four topics were invited to participate in the group chats.
Read more about the Danish Safer Internet Centre.
Read more about Safer Internet Day celebrations in Denmark.

"The victim is never to blame" – this was the conclusion from an agreeing panel when the Me-dia Council for Children and Young People, Centre for Digital Youth Care and Save the Children Denmark marked the launch of a new book and project on image sharing without consent.

Is it true that the data we post online remains on the web forever?

This question was posed several times by pupils of secondary education during a series of webinars that the Greek Awareness Centre implemented across the country from December 2015 until March 2016, in collaboration with the Computer Technology Institute & Press ‘Diophantus', and with the aim of raising awareness on the importance of our (data) privacy.

In this article, Dr. Kisfaludi Gábor shares some methods to measure how students aged 8 and 20 consider, classify and protect their data, what factors affect them and what adults can do to strengthen their awareness.

That data, actually OUR data, in the Cloud

Nowadays, the Cloud is everywhere. For most users, this technology is assimilated to some sort of a digital extension of their technology-related hardware. If from a technical standpoint the Cloud is not a revolution but a mere evolution of online services, the Cloud nonetheless changes the relationship between us, as users, our computer equipment, our data and our Internet Service Provider (ISP).

For many years, schools have been required to be compliant with data protection laws. Many of us that work with schools are all too aware of the difficulties they face in achieving compliance. Here at the South West Grid for Learning and the UK Safer Internet Centre (SIC), we know that schools work to achieve compliance through a variety of means. Some rely on local authority staff, or the Information Commissioners' Office for support, advice and training. What is clear is that practice remains inconsistent and that data breaches are occurring.

Children and youth are consumers of so many different technologies but rarely have the chance to have a closer look at what is behind the technology. In May 2015, a group of students from the IT University of Copenhagen Games Education, in collaboration with The Media Council for Children & Young People and the Danish Film Institute, held a workshop for a group of 5th graders, inviting the pupils to have a look behind the scenes of video games development.

Want to become a Social Star? A learning resource about hidden commercials on blogs

Commercials can be a tricky thing. Most of us are able to spot that a company wants us to buy their products when we watch their commercials, but what if the ad is hidden as a flattering recommendation? Social Star, an online learning resource, is about hidden commercials on blogs.

Children and young people's lives are increasingly taking place online, both in schools and at home. This digital life brings many advantages, but also some security risks. Young people may surf at the speed of light, but sometimes they end up in situations which they do not know how to handle. The learning resource 'CodeX – Mission Secure' seeks to empower them online.

What's all the fuss about data protection in schools?

SoMe Youth Panel in Denmark

The Danish youth ambassador panel, "SoMe Youth Panel", consists of ten young people (six girls and four boys) aged 13-18. They have been recruited from around Denmark with representation from different demographic, ethnic and socio-economic groups and with no special prerequisites for participation other than being young, and being prepared to take part in the workshops and to be the voice of a generation in different contexts. In recruiting young people for the youth panel, the Danish Safer Internet Centre (SIC) benefitted from the great network of schools that Save the Children Denmark (SCDK) and the Centre for Digital Youth Care (CDYC) have built throughout the years of working in the field.

In autumn 2017, the Media Council for Children and Young People launched a creative, pedagogical and didactic media education project in collaboration with the "Future Classroom Teacher" at the University College of Copenhagen and internship schools in Gladsaxe Municipality.

Pictures, videos and emojis are becoming increasingly important for online communication – especially with children and young people. Two of their favourite apps for sending photos are Instagram and Snapchat.