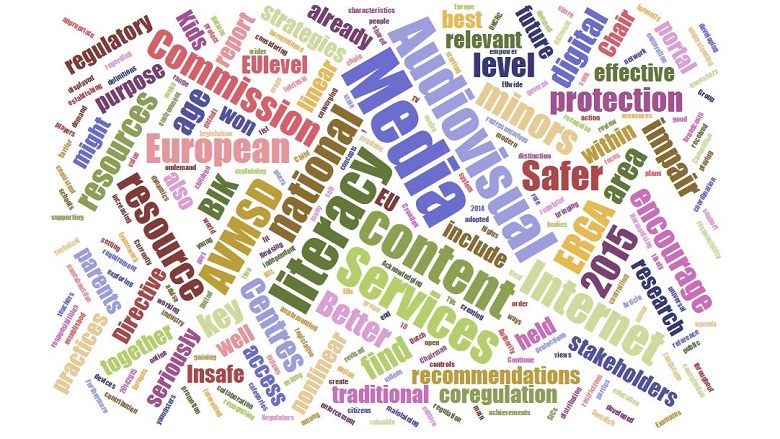 In a converging media world where children and young people have increasing access to digital devices – from videos on demand to connected TVs – media literacy has grown to be an intrinsic requirement for all audiovisual media users.

Acknowledging these dynamics, the EU Audiovisual Media Services Directive (AVMSD) – which governs EU-wide coordination of national legislation on all audiovisual media, both traditional TV broadcasts and on-demand services – has been open for review. More specifically, in order to seek the views of all interested parties on how to make Europe's audiovisual media landscape fit for purpose in the digital age, the European Commission held a public consultation on the AVMSD in 2015.
Earlier, in 2014, the European Commission formally established the European Regulators Group for Audiovisual Media Services (ERGA), with the purpose of bringing together heads or high-level representatives of national independent regulatory bodies in the field of audiovisual services, to advise the Commission in implementing the EU's AVMSD in a converged media age. Currently, the Dutch Media Authority is the ERGA chair, working together with the Chairman of the Croatian regulator and the ERGA Chair of 2014-2015.
At the end of 2015, ERGA adopted a Report on protection of minors in a converged environment, explaining how this should evolve in the future EU legislative framework. The report provides some key recommendations on the future system of protection of minors, as follows:
In line with these recommendations, specifically regarding media literacy, the Insafe network of Safer Internet Centres (SICs) in Europe is already playing its part within the Better Internet for Kids (BIK) agenda. As displayed throughout the publicly-available Better Internet for Kids (BIK) portal, media literacy has been a key focus area for many Safer Internet Centres which have developed at a range of good practices, resources and activities for youngsters, parents and teachers at national level. Furthermore, some of these resources have also received wider recognition of their valuable contribution in this area. Examples include ‘MIL for me' - a Swedish resource on media literacy which won a resource competition held at the Insafe Training Meeting in spring 2015, and the Greek ‘Grocery Store' video which won the best media literacy digital resource in the Miler competition in December 2015 along with other accolades.
More information on the media literacy activities of national Safer Internet Centres can be found on the BIK portal – for example, search the resource gallery by keyword to find relevant resources in addition to those already mentioned above. Alternatively, check the profile page of your local Safer Internet Centre to find out more about their work.
For further reading on the Audiovisual Media Services, see the latest preparatory documents of the AVMSD and find additional background information on the European Commission website.

"The media landscape has shifted dramatically in less than a decade. Instead of sitting in front of the family TV, millions of Europeans, especially young people, watch content online, on demand and on different mobile devices. Global internet video share in consumer internet traffic is expected to increase from 64 per cent in 2014 to 80 per cent by 2019", informed the European Commission in a press release issued on 26 April 2018.

The already double-awarded short movie ‘The Grocery Store' won yet another distinction as the best media literacy digital resource in the Miler competition launched by the Evens Foundation and the Modern Poland Foundation.

European Schoolnet is delighted to have participated in the Media and Learning Conference 2016. We would like to kindly thank everyone who visited our stand to learn more about our work, projects and publications.

Looking for media literacy research? The index might help

In this highly mediatised world, the importance of media literacy is recognised by different actors from all around the globe. The issues related to media literacy have gained interest also from researchers. Studies focusing on these issues are conducted by various scholars and the research articles are published in various journals. To help to promote media literacy, we've attempted to make the information more visible by compiling an index to media literacy research. Take a look at www.medialiteracy.fi.

In the view of fast-paced developments in the audiovisual environment where children, parents and carers have to multitask and adapt in the engaging Internet of Things (IoT) age, the Audiovisual Media Services Directive (AVMSD) from 2010 has been reviewed by the European Commission in recent months, seeking more appropriate and up-to-date legislation.

Nowadays, as we get most of our information through various media outlets, the ability to ‘read' many different types of media has become an essential skill in the 21st century.

The annual national exhibition ‘Mokykla 2016' (School 2016), which took place 25-26 November 2016 in the Lithuanian Exhibition and Congress Centre (LITEXPO), was dedicated to meeting and talking with families, teachers and other stakeholders in schools' activities.

Literacy, in its most basic sense, is defined as the ability to read, to write and to count. In time, its meaning has broadened to comprise a wide range of skills and abilities that are needed to fully and actively be part of society. Undeniably, literacy has become crucial in empowering children, young people and adults alike, and ensuring that they acquire those skills and competencies necessary to help them contribute to society and improve their lives.

The way forward for a better audiovisual media content rating

In the current context of audiovisual media services crossing TV borders to the digital atmosphere, the European Parliament proved to be one of the best-placed stakeholders to hold constructive discussions on the EU legislative actions. On 10 October 2017, iCmedia held an informative event on "The way forward for a better audiovisual media content rating" at the European Parliament in Brussels, bringing together a number of key stakeholders currently working on Audiovisual Media Services dossiers at European or international level.

‘MIL for me': an online training resource on media and information literacy

The recent Insafe training meeting played host to a resource competition, designed to showcase the best resources from across the European network of Safer internet Centres (SIC) to identify one which should be translated and localised. Following some fierce competition, the Swedish resource ‘MIL for me' was crowned the winner.