Children and young people are at the heart of what we do. Indeed, they are the main benefactors of the Safer Internet Day campaign – and the Better Internet for Kids (BIK) agenda more generally – as we unite across the globe to provide a safer and better internet for them, and seek to equip and empower them with the skills, knowledge and support to benefit from all of the wonderful opportunities that the online world has to offer. Youth involvement was very prevalent in the 2022 celebrations.

2022 has been designated as the European Year of Youth by the European Commission, placing a spotlight on the importance of empowering youth to build a better future – and one that is greener, more inclusive, and digital. Within the context of the year, Europe’s young people are encouraged to share their visions, meet with decision-makers, and engage in activities all over Europe, providing a post-pandemic perspective to help Europe move forward with confidence. As such, their active involvement in Safer Internet Day celebrations – at both coordination and national level – was encouraged. You will find many examples of youth involvement in the pages that follow.

Youth in conversation with Commissioners

To kick start the celebrations, on the eve of Safer Internet Day, the European Commission published a couple of video clips (in English and French) on social media in which Vice-President Šuica and Commissioner Breton discussed children’s digital rights and online safety with several BIK Youth Ambassadors, specifically focusing on the EU’s actions in those areas.

These clips are part of a longer discussion, extracts of which will be published over the coming months as part of the ongoing focus on creating a Digital Decade which is fit for Europe’s children and young people as part of the EU’s commitment to establishing digital principles and targets for all citizens by 2030, as well as the publication of a new European Strategy for a Better Internet for Children (BIK Strategy) in the first half of 2022 which will guide ongoing work in this field. Keep an eye on the Safer Internet Day social channels (on Twitter, Facebook, LinkedIn and TikTok) for the latest updates.

Additionally, under the European Year of Youth banner, a series of youth-led videos were published featuring Better Internet for Kids Youth Ambassadors and youth panellists from different countries in Europe exchanging views on their priorities online, the importance of digital skills, and their perspectives on how to ensure better online experiences in the future. 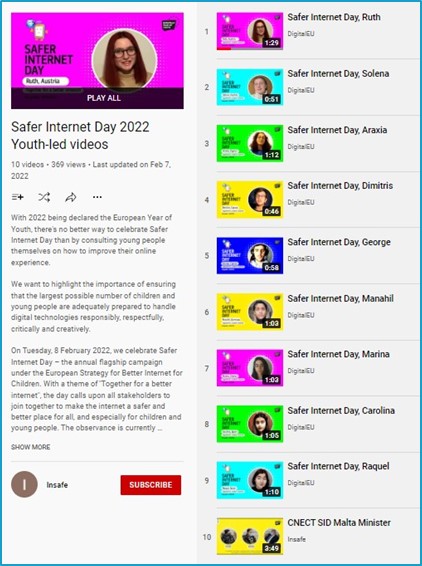 Moreover, on the morning of SID itself, DG HOME (the Directorate General for Migration and Home Affairs) and DG CNECT (the Directorate General for Communications Networks, Content and Technology) of the European Commission hosted a live Twitter Spaces event, providing an overview of how the EU is helping young people feel safer online through legislation and awareness raising. Kathrin, a long-standing BIK Youth Panellist, contributed her views alongside representatives of the European Commission, and representatives from the awareness and helpline strands of European Safer Internet Centres. More than 450 listeners joined the live broadcast. 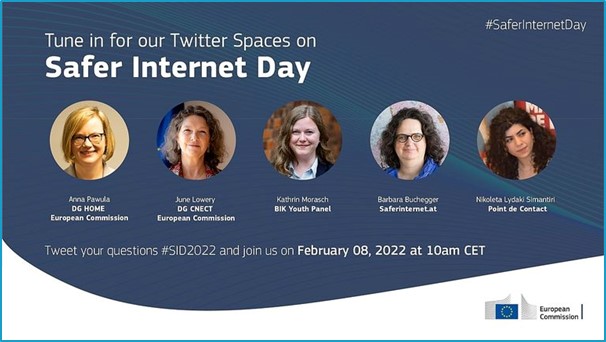 The aim of the Summit was to empower all participants to speak their minds about online issues that matter most to them, and to be included in the public conversation about how to improve everyone’s digital experience. The event included a session on online safety, where new tools and policies recently implemented by Twitter were illustrated. Participants then split into smaller breakout sessions, where they could discuss online safety issues more freely, and voice concerns they were experiencing on the platform so that Twitter could listen, learn and improve their experiences.

In total, 24 BIK Youth Ambassadors from various European countries participated in the Summit. During the breakout sessions, they had the chance to share their views on what safety tools they find have been working well for them on Twitter (for example, the mute and report tool, conversation controls, and more), and to discuss what opportunities for policy growth they see and what mechanisms should be prioritised for implementation. Among the most reported opportunities for further development was the strengthening of misinformation and hate speech detection, especially when occurring through coded language or by using regional dialects currently not covered by the platform. Other suggestions included a network of trusted fact-checkers to better verify the context of any reported content, and to better educate users of the reporting options available to them when using the social network. Read more on the Summit here.

As can also be seen throughout the many case studies in the following sections this report, children and young people were often at the heart of country-led activities also, with youth panels shaping the preparation of activities, leading presentations on the day, delivering peer-led activities in schools, or participating in industry initiatives, among many other actions.

On Safer Internet Day and always, we thank young people for sharing their views on these important topics, and helping to shape the digital space now – alongside policy makers and industry – for the benefit of future generations.

Visit the BIK Youth website to learn more about how young people are getting involved in the Better Internet for Kids agenda, in Europe and beyond.

The new Better Internet for Kids strategy is out! Introducing BIK+

Today, the European Commission has adopted a new European strategy for a Better Internet for Kids (BIK+), with the aim to improve age-appropriate digital services and to ensure that every child is protected, empowered and respected online. This new strategy comes ten years after the first BIK strategy, and during the European Year of Youth, spotlighting the voices and ideas of young people themselves.

Youth Internet Monitor 2022 is out: Which social networks do young people in Austria use?

Every year, the Austrian Safer Internet Centre Saferinternet.at presents the current data on the use of different social media platforms by Austrian youth. Which social networks are currently the most popular among young boys and girls in Austria? The results are collected in the Youth Internet Monitor.