Some 40 per cent of teenagers in 32 countries (1) say they've been involved in a bullying incident as the target of the bullying, someone who displayed bullying behaviours or as a bystander. Meanwhile, 37 per cent of adults said they were involved in a "bullying" incident. Combining both teens and adults, 38 per cent of respondents say they were involved, with 19 per cent identifying as the "target," 21 per cent as a "bystander" and 1 per cent each as both "contributor" and "bully." Respondents were asked about both online and offline bullying, and adults were asked about "bullying" (perhaps better termed "harassment") both inside and outside the workplace.

Interestingly, those who admitted to either contributing to or exhibiting bullying behaviours responded overwhelmingly that they felt social pressure to act (68 per cent) and they said that they regret their actions (79 per cent). Among those who felt significant pressure to act, regret was even higher at nearly 9 in 10 (89 per cent). 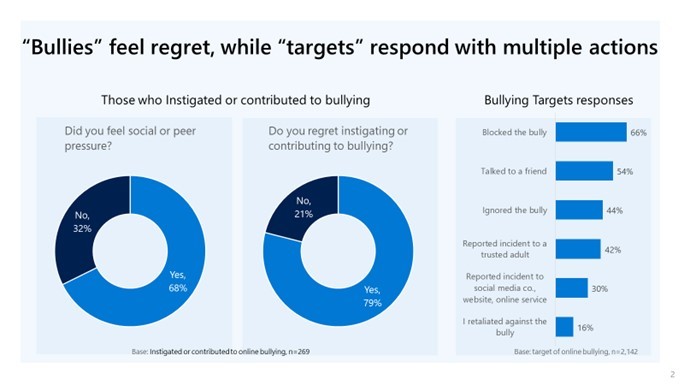 The findings are from Microsoft's latest research into aspects of digital civility - encouraging safer, healthier and more respectful online interactions among all people. The study, "Civility, Safety and Interaction Online - 2020," polled teens aged 13-17 and adults aged 18-74 about their exposure to 212 different online risks. This latest research builds on similar studies undertaken annually from 2016 to 2019. Previous years' projects polled the same demographic groups in 14, 22, 23 and 25 countries, respectively. A total of 16,051 individuals participated in this latest study, and more than 58,000 people have been surveyed over the last five years. Full results from this latest instalment will be made available on the international Safer Internet Day (SID) 2021 on Tuesday, 9 February 2021.

For nearly a decade, young people around the world have been advised to "Stop, Block and Tell" when it comes to online bullying, and that was the predominant response reported in this study. Two-thirds of respondents (66 per cent) said they blocked the instigator while more than half (54 per cent) said they talked to a friend, and more than 4 in 10 either ignored the person (44 per cent) or told a trusted adult (42 per cent). Sadly, given the importance of reporting unwelcome behaviour to tech companies to help keep online communities safe and collegial, less than a third of respondents (30 per cent) said they told a service provider, such as a social media company, about the incident.

We've all seen various webforms and online tools for reporting instances of cyberbullying, harassment, or other forms of digital abuse to tech companies. But how many of us have experienced or witnessed cruel or malicious treatment online or stumbled upon harmful content and actually submitted a report? In addition to specific in-product or service links to report abuse or concerns to Microsoft, the company also makes available a series of topic-specific webforms to report non-consensual pornography (unartfully referred to as "revenge porn"), terrorist content and hate speech. These issues, as well as bullying, harassment and other inappropriate behaviour are all violations of Microsoft's Code of Conduct as detailed in the Microsoft Services Agreement. On the other hand, if consumers feel their content was removed or their account was closed in error, they can complete this form to request reinstatement.

Microsoft and other online service providers have a business interest in protecting their customers and the integrity of their services by removing illegal and harmful content and addressing prohibited conduct. Furthermore, customer-reporting plays an important role in achieving those aims. So Microsoft encourages people who participate in its communities to make the company aware of content that is illegal or violates the code of conduct. General research shows that many users are reluctant to report terms-of-service violations because they feel their reports will go unnoticed or they would simply prefer to let someone else do the reporting.
At Microsoft, reports are reviewed, evaluated and actioned as appropriate. Depending on the severity of the offense, different Microsoft consumer services undertake different enforcement actions.

So, as the new – largely virtual – school year begins, pledge to be an "upstander." Embrace the Microsoft Digital Civility Challenge and, if it's safe and prudent to do so, stand up for yourself and others online who may be targeted for abuse or cruel treatment. Make use of technology companies' reporting features and promote good digital citizenship and digital civility in all communities.
To learn more about responding to online bullying and harassment, consult the resource "Dealing with harassment on the internet" by Microsoft, and for more on digital safety and digital civility generally, visit the Microsoft Online Safety page, and the resources page.

On 21-22 June 2022, the Digital Assembly took place in Toulouse, France. The Digital Assembly is an annual event hosted jointly by the European Commission and the holder of the Presidency of the Council of the European Union (EU). It is a key forum for members of the European digital ecosystem to gather and discuss important issues. This year’s two-day conference included workshops, panel discussions and plenary sessions focusing on issues related to EU sovereignty and autonomy. In particular, a workshop on day one focused on the newly adopted European strategy for a Better Internet for Kids (BIK+). BIK Youth Ambassadors Sina and Dimitris were there to share their views.