Teenagers and adults in the Asia-Pacific (APAC) region reported an uptick in online civility and more respectful digital interactions during the COVID-19 global pandemic, results from a new Microsoft research study show. Meanwhile, respondents in Latin America said online civility worsened, punctuated by an increase in the spread of false or misleading information.

Nearly one-third (31 per cent) of respondents in nine APAC geographies said online civility improved in the COVID-19 stay-at-home environment, a 5-percentage-points increase compared to the worldwide reading of 26 per cent. A total of 32 geographies (1) were included in this year's study, which was conducted in April and May. Across other regions, participants in Latin America, Central and Eastern Europe, and the combined grouping of North American and Western European countries (2), said online civility improved by smaller percentages: 30 per cent, 17 per cent and 20 per cent, respectively.

Meanwhile, in Latin America, 31 per cent said online civility declined during the crisis, topping the worldwide reading of 22 per cent by 9-percentage points. APAC, Central and Eastern Europe, and the combined North American and Western European block, posted "worsening" percentages of 22 per cent, 28 per cent and 17 per cent. Additional details are shown in the chart below. 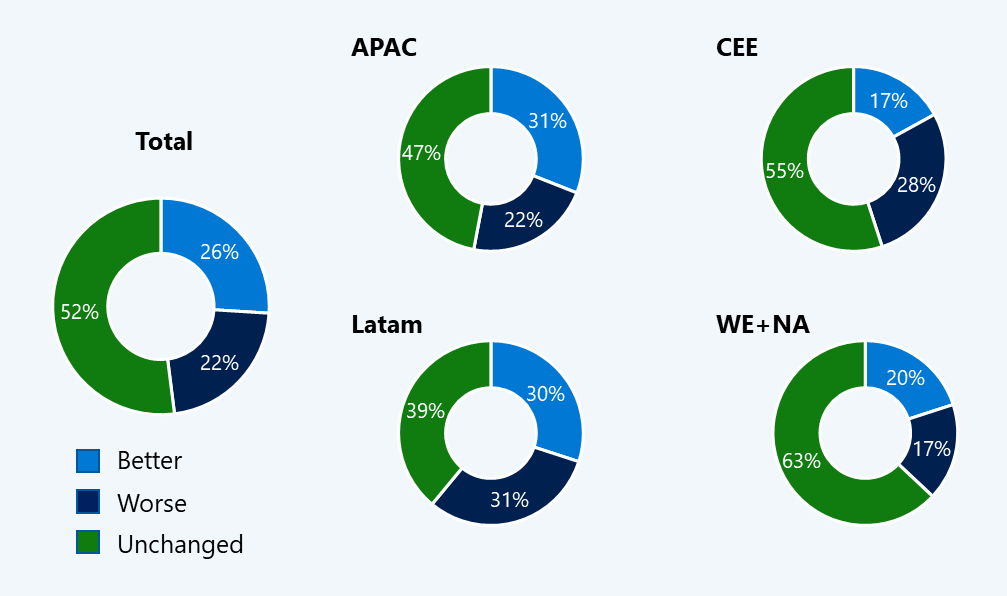 Worldwide (52 per cent) and regionally, a majority of respondents said online civility was unchanged by COVID-19. Regional "unchanged" percentages break down as follows:

Overall, results underscore that despite anecdotal reports of declining online civility during COVID-19, the global picture is more nuanced.

The findings come from the latest study, "Civility, Safety and Interaction Online – 2020", which polled teenagers aged 13-17 and adults aged 18-74 about their exposure to 21 different online risks across four categories: behavioural; sexual; reputational; and personal/intrusive (3). This research builds on similar studies about digital civility that Microsoft has conducted in each of the last four years when fewer countries were included.

A total of 16,051 individuals participated in this year's poll, and Microsoft has surveyed more than 58,000 people on these topics since the start of this work. Full results, including the release of the latest Microsoft Digital Civility Index (DCI), will be made available on the international Safer Internet Day (SID) 2021 on Tuesday, 9 February 2021. The DCI is a measure of the tone and tenor of online interactions as reported by consumers in all surveyed locales. Last year, the index stood at its lowest level since the research began, indicating a high level of perceived online incivility.

Of the 26 per cent of global respondents who thought online civility improved in April and May during COVID-19, people helping other people and a sense of "we're all in this together" were the primary reasons behind their responses. More than two-thirds (67 per cent) said they saw people helping others and 60 per cent said they had a greater sense of "we're all in this together." Meanwhile, in APAC, nearly three-quarters of positive respondents (70 per cent) saw people helping others, and the second most highly rated reply was people being more encouraging to one another (66 per cent). Other positive responses in the APAC region included a greater sense of community, people coming together to deal with the crisis, and people reconnecting online with family and friends.

In Latin America (70 per cent) and globally (67 per cent), an "increased spread of false or misleading information" was the primary reason given by those who thought online civility had faltered during the pandemic. Other standout "worsening" responses in Latin America included "people taking out their frustrations online" and "people being less tolerant."

Check out the factsheet on helping young people identify misinformation and hate speech, and read about what Microsoft is doing to combat COVID-19 misinformation more broadly.

Given the toll the global crisis was taking on people around the world both online and off, Microsoft added some special questions to this year's study to explore the perceived impact of COVID-19 on online interactions in this fifth milestone instalment of the research. That's also why Microsoft added (or re-added) seven geographies to the 2020 study: Australia, Denmark, Philippines, Spain, Sweden, Taiwan and Thailand.

The first Microsoft Digital Civility Index reading for each of these geographies, bar Australia, will be made available on SID 2021. Australia's 2020 index will be the first reading since Year Two of the study.

And while more of the world starts to re-open following what was truly an unprecedented event in most of our lifetimes, many of us are still working and learning from home, and practicing social distancing. These circumstances underscore the need for safer, healthier and more respectful interactions both online and off. We only need to look to last year's research to recall what people hoped for in this new decade of the 2020s. Respondents in 25 countries said they wanted "respect," "safety," "freedom," "civility" and "kindness" to define online interactions in the 2020s, and they added a few predictions for some more sensitive scenarios. A third of all respondents said they expect fewer women to be sexually harassed online, fewer teens to be bullied and online political discussions to become more constructive in the new decade.

To get back on track and help realise some of those uplifting 2020s predictions, Microsoft continues to point to its Digital Civility Challenge: four common-sense principles to help engender compassion, empathy and kindness. Everyone can commit to the challenge actions and pledge to adopt positive online habits and practices. Those actions are: live the golden rule; respect differences; pause before replying; and stand up for yourself and others. Learn more about the challenge on the Microsoft website and visit its Online Safety page, along with resources page for additional advice and guidance for tackling almost any online safety issue.

For more information, visit Microsoft's Safer Internet Day Supporter page. This article was originally published on the Microsoft On The Issues blog and is reproduced with permission from the authors.

2 Regional groupings are as follows:

3 The definition of the four categories are as follows:

New Italian awareness-raising campaign: “If you are not of age, social networks can wait"

The Italian Data Protection Authority (DPA) and Telefono Azzurro (the helpline component of the Italian Safer Internet Centre (SIC)) are working together to protect children’s rights in the digital environment with a new awareness-raising campaign aimed at highlighting minimum age requirements for use of social networking sites.