In the spotlight: Safer Internet Centres Germany and Luxembourg

As part of the Better Internet for Kids (BIK) Quality Assurance Programme (QAP), the Insafe-INHOPE Coordination Teams are jointly conducting a set of ten country visits to national Safer Internet Centres (SICs) to better understand what is happening in the Member States: monitoring emerging issues and challenges, identifying good practices to be shared, and harvesting the results of the Better Internet for Kids (BIK) policy. Due to the circumstances caused by the COVID-19 pandemic, a cluster visit planned for the German and Luxembourgish Safer Internet Centres had to be converted to an online meeting that took place between 3-5 August 2020 and brought together a group of diverse stakeholders and Safer Internet Centre consortium partners. 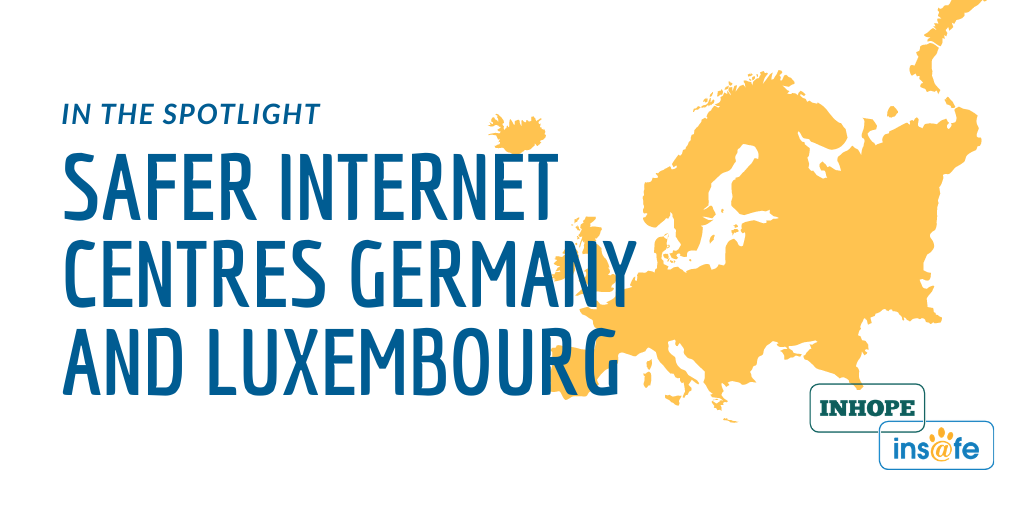 During the stakeholder roundtable, the following partners were present for the Luxembourgish Safer Internet Centre:

The meeting continued with the overview of the Safer Internet Centre structures and various activities they carry out. In this context, it was noted that the German Safer Internet Centre consists of six partners representing three different strands: klicksafe, which serves as the awareness centre, is operated by the Media Authority for Rhineland-Palatine (Medienanstalt Rheinland-Pfalz) which also coordinates the German SIC in general, and the Media Authority for North Rhine Westphalia (Landesanstalt für Medien NRW). However, it is important to note that klicksafe operates in Germany in its entirety and not only within these two federal states. Furthermore, the helpline of the German SIC is operated by NummergegenKummer (NgK). In addition, two alert platforms are operated by three hotlines within the German SIC consortium: Jugendschutz.net and internet-beschwerdestelle.de, which is operated by Freiwillige Selbstkontrolle Multimedia-Diensteanbieter (FSM) and eco - Association of the Internet Industry (eco).

BEE SECURE, which serves as the Luxembourgish Safer Internet Centre, is a government initiative of the Grand Duchy of Luxembourg. It is provided by the Service National de la Jeunesse (SNJ), which coordinates the SIC as well as the youth participation and awareness activities, and Kanner-Jugendtelefon (KJT), which operates the helpline and hotline.

In addition to an extensive update on the various awareness-raising activities organised by the Safer Internet Centres, some discussion focused on the organisations of their respective youth panels. In Germany, klicksafe facilitates a youth panel (with members up to age 20) and a children’s panel (with members aged 9-12), in collaboration with four schools from two federal states. In addition, klicksafe also engages the Media Scouts, which are nationwide peer-to-peer projects in which young people act as qualified Media Scouts, advise pupils on their use of media, and answer their questions about smartphone use, social media networks, and the internet, among other topics. Similarly, the Luxembourgish Safer Internet Centre facilitates a kids panel (with members under 12 years old) and a youth panel (with members aged 12-18) who meet on demand to discuss new media and to share their views on information safety related issues and on emerging trends.

For Safer Internet Day (SID) 2021, the Icelandic Safer Internet Centre planned multiple activities. On the day of SID, it launched a media campaign on the newly updated hotline reporting tool and website.

New Italian awareness-raising campaign: “If you are not of age, social networks can wait"

The Italian Data Protection Authority (DPA) and Telefono Azzurro (the helpline component of the Italian Safer Internet Centre (SIC)) are working together to protect children’s rights in the digital environment with a new awareness-raising campaign aimed at highlighting minimum age requirements for use of social networking sites.