The Insafe network of helplines collects data about the types of calls they receive and this is analysed every three months in order to look at possible trends and emerging issues.

The most recent helpline data covers the period from July to September 2022. There were over 17,500 contacts made to the network which continues the upward trend in the numbers of people who are reaching out to helplines as has been the case for the last three years.

Cyberbullying remains the most common reason for contacting a helpline accounting for 14 per cent of all contacts. The previous reporting period had 13 per cent of contacts relating to this and so this current period brings the percentage back in line with previous data.

Once again there has been a rise in contacts relating to e-crime with this accounting for eight per cent of all contacts. Helplines talked particularly about identity theft and accounts being hacked – especially on social media platforms and Safer Internet Centres are constantly reinforcing the importance of privacy, strong passwords and good overall cyber-hygiene.

Unfortunately there has been a rise of one percentage point in contacts relating to sextortion. This is an ongoing concern and in some countries there appears to have been a rise in cases targeting boys and young men. It was noted that advances in technological evolutions are facilitating criminals who want to benefit from sextortion. The number of contacts relating to sextortion rose by seven percentage points during this period.

The main users of the helplines continue to be teens (aged 12 to 18) and this group represents almost 60 per cent of all contacts made – a significant rise on the previous reporting period. Helplines are also receiving contacts from parents/carers and also from teachers asking for advice and guidance in supporting the children and young people in their care or who they are working with and during this reporting period parents account for over 20 per cent of those who reach out to helplines.

38 per cent of contacts came from individuals identifying as male and this represents a fall of four percentage points on the previous reporting period.

During a recent Insafe training meeting in Brussels, helplines spent time discussing the various categories that are used (and their definitions) in order to see if anything needs to be adapted to capture the issues and challenges facing young people more accurately. Colleagues considered the recommendations from the helpline data working group and shared their thoughts and ideas for ways to improve and streamline the current approach. 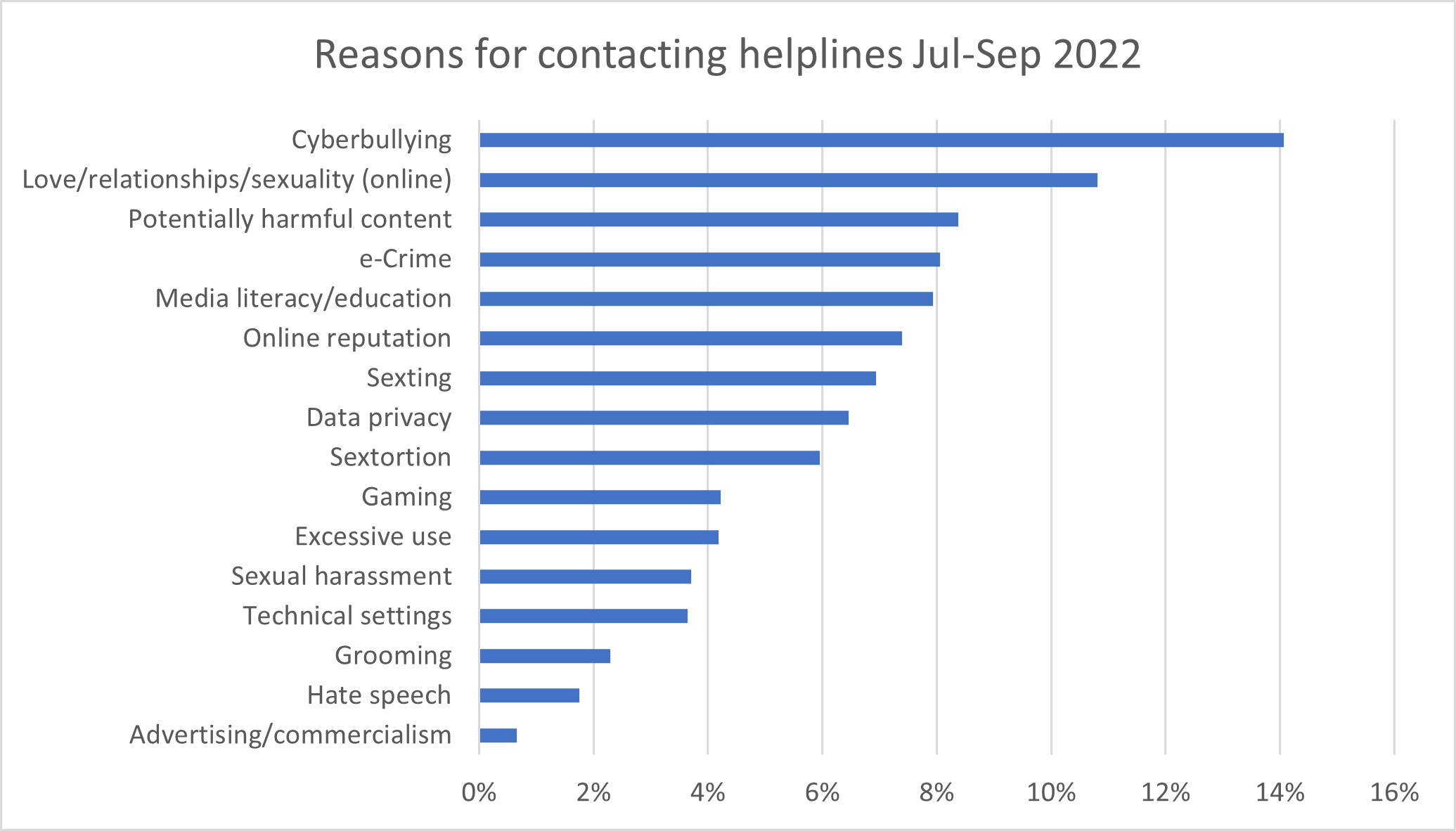 Prevention: the value of parental supervision

INHOPEs mission is to support our member hotlines in the rapid identification and removal of Child Sexual Abuse Material (CSAM) from the digital world. By processing incoming reports of suspected CSAM, our network prevents distribution and revictimisation, which is crucial to avoid further harm and trauma for the affected children. However, if we want to reach our goal of an internet free of CSAM, we must not only react to abuse but also focus on preventing abuse before it happens.

In the spotlight: Safer Internet Centres Greece and Ireland

As part of the Better Internet for Kids (BIK) Quality Assurance Programme (QAP), the Insafe-INHOPE Coordination Teams are jointly conducting a set of fourteen country visits to national Safer Internet Centres (SICs) to better understand what is happening in the Member States: monitoring emerging issues and challenges, identifying good practices to be shared, and harvesting the results of the Better Internet for Kids (BIK) policy. Even though the COVID-19 related safety measures are getting lighter across Europe, it was still agreed by both parties that some of the visits would take place in an online format, particularly in the case of cluster meetings, in order to facilitate interaction between SICs that are geographically distant and different from each other in terms of culture and language. To this end, one such online cluster meeting was organised with the Greek and Irish SICs.