The most recent helpline data covers the period from April to June 2022. There were just over 20,000 contacts made to the network which continues the upward trend in the numbers of people who are reaching out to helplines, as has been the case for the last three years.

Cyberbullying remains the most common reason for contacting a helpline, accounting for 13 per cent of all contacts. However there has been a steady decline in the percentage of contacts relating to cyberbullying over the last four reporting periods with 13 per cent being the lowest in over two years. Despite this, the actual number of calls has remained quite stable.

Love, relationships and sexuality online accounts for 12 per cent of contacts which reinforces the understanding that many children and young people struggle with these issues both on and offline.

Helplines reported that the conflict in Ukraine is still a topic of conversation but that they have received less calls related to this during the current reporting period. As mentioned in previous reports, the network has developed a number of useful materials to support counsellors, children and young people, and their parents, carers and educators in how to deal with issues surrounding the current situation in Ukraine.

Several helplines reported a rise in the percentage of contacts which were categorised as e-crime which is defined as Identity theft, fraud, data theft, copyright infringement, hacking, piracy, etc. For example, the helpline in Cyprus reported that almost half of its contacts related to hacking incidents with particular reference to compromised passwords and illegal access to social media accounts. Similarly, the Spanish helpline noted that there was a significant increase in calls related to stolen and hacked accounts on platforms such as Instagram and Discord, as well as online games. In all cases, helplines were able to provide advice, guidance and support on securing accounts and preventing similar problems from occurring in the future.

The main users of the helplines are teens (aged 12 to 18) and this group represents around 43 per cent of all contacts made – a reduction on the previous reporting period. Helplines are also receiving contacts from parents/carers and likewise from teachers asking for advice and guidance in supporting the children and young people in their care or who they are working with.

During this quarter, 42 per cent of contacts came from individuals identifying as male which represents a rise of two percentage points on the previous reporting period.

A working group is currently looking at the various categories that helplines use (and their definitions) in order to see if anything needs to be adapted to capture the issues and challenges facing young people more accurately. The recommendations from the group will be considered by the wider helpline network at the Insafe Training meeting taking place in Brussels at the end of October.

Helplines record calls against 16 different categories and the percentage of contacts relating to each category do not tend to vary a great deal from one reporting period to another, although the numbers of contacts do and there is an upward trend in most categories. 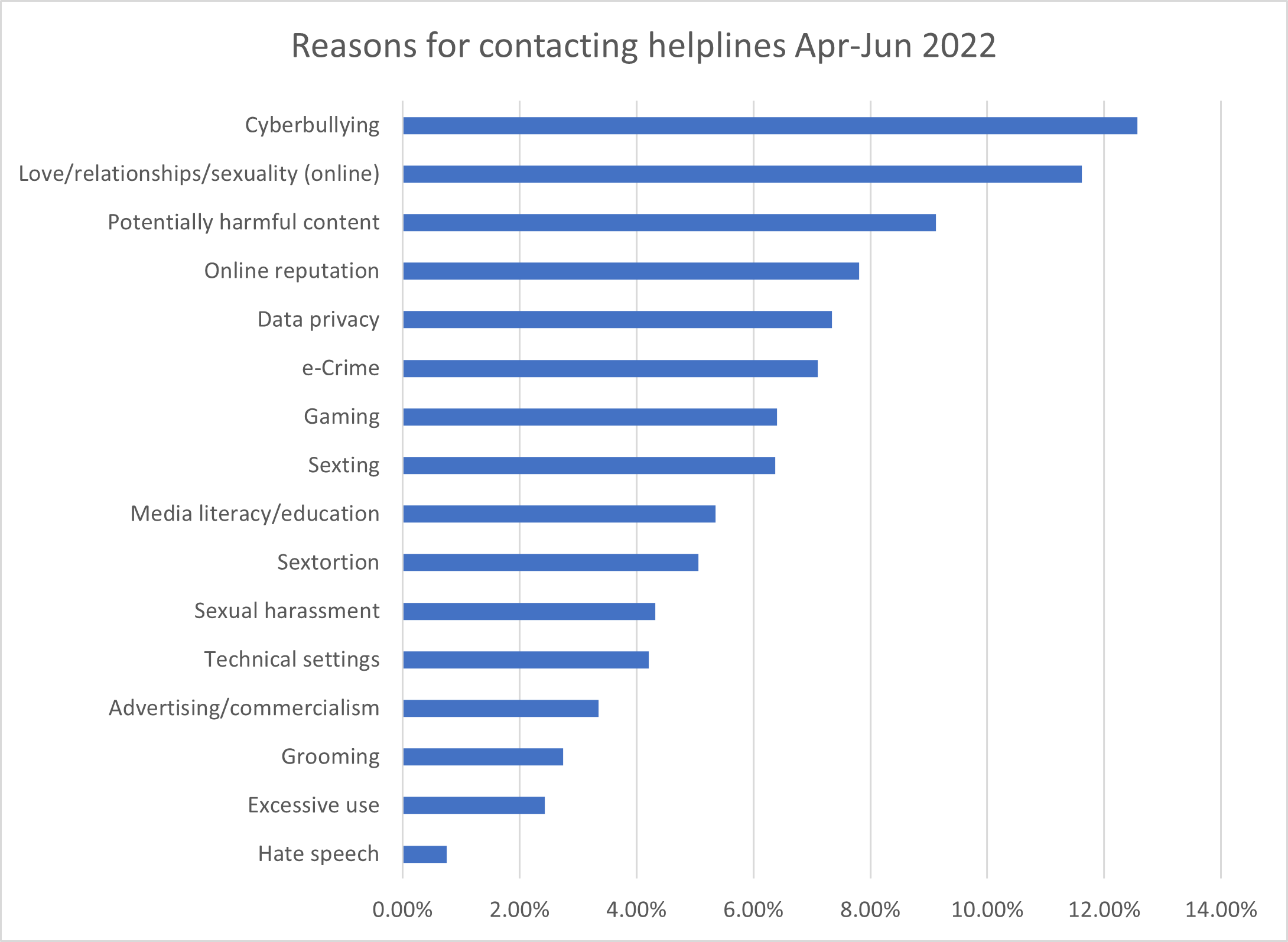 Helpline statistics can be accessed in detail at betterinternetforkids.eu/helpline-statistics where country comparisons can also be made.

Today, the Insafe network of European Safer Internet Centres (SICs) meets for another edition of the bi-annual training meeting. This event is an opportunity to facilitate sharing of experience and good practices between network countries, to explore areas of common ground, and opportunities for closer working between awareness raising, helpline, and youth participation strands. For the first time since the pandemic, the training meeting is being held face-to-face in Brussels, Belgium.

At the beginning of July, the second webinar of the SIC+ programme took place with a focus on the role of parents and awareness-raising activities that address parents. Three organisations shared their knowledge and resources on this topic: COFACE Families Europe, Child Focus and Mediawijs. This article presents the key takeaways of this webinar, including links to relevant resources on the topic of the role of parents and awareness-raising activities for online safety.