The most recent helpline data covers the period from January to March 2022. There were just under 19,000 contacts made to the network and numbers were very similar to the last quarter of 2021. There is an overall upward trend in the numbers of people who are reaching out to helplines, and this has been the case for the last three years – contacts have increased by 52 percentage points since the same period in 2019.

A key topic of concern for many children and young people during this period has been the conflict in Ukraine. Many are seeing graphic images of what is happening on the ground in Ukraine via their social media platforms and are struggling to deal with this. At a recent training meeting, the Insafe network of Safer Internet Centres in Europe heard from colleagues who operate the helpline in Ukraine who told of how social media is being used to scare and frighten children and young people, telling them that they and members of their family could be captured and tortured. Such posts are widespread and are causing real concern for children and their families. The network has already developed a range of materials that can be used to help to provide support.

Helplines also continue to recognise the impact that COVID-19 has had on children and young people, and many of the calls from parents and teachers relate to concerns around mental health and wellbeing that have been exacerbated as a result of the pandemic.

The main users of the helplines are teens (aged 12 to 18), and this group represents around half of all contacts made. The other key groups are teachers and parents with around 20 per cent of contacts coming from each group.

40 per cent of contacts came from individuals identifying as male and this mirrors previous reporting periods. Most helplines, however, receive more calls from those identifying as female and this is in line with much of the research that suggests girls are more likely than boys to be victims of online harms.

Helplines record calls against 16 different categories and the percentage of contacts relating to each category do not tend to vary a great deal from one reporting period to another, although the numbers of contacts do and there is an upward trend in most categories.

Cyberbullying continues to be the issue which helplines receive the most contacts about. Almost 14 per cent of contacts were about this issue and it is something which helplines and awareness centres are working tirelessly to address. The recently published BIK+ strategy also highlighted cyberbullying, recognising that globally, more than a third of young people have reported being a victim of cyberbullying. The new strategy outlines specific measures to support victims.

Love, relationships and sexuality is another category which many young people need support with. This accounts for almost 12 per cent of calls, while potentially harmful content has around 10 per cent. Issues and concerns related to sexting, sextortion and sexual harassment are high with around 17 per cent of contacts focusing on these categories. Again, Safer Internet Centres are doing a lot of work to address these areas. 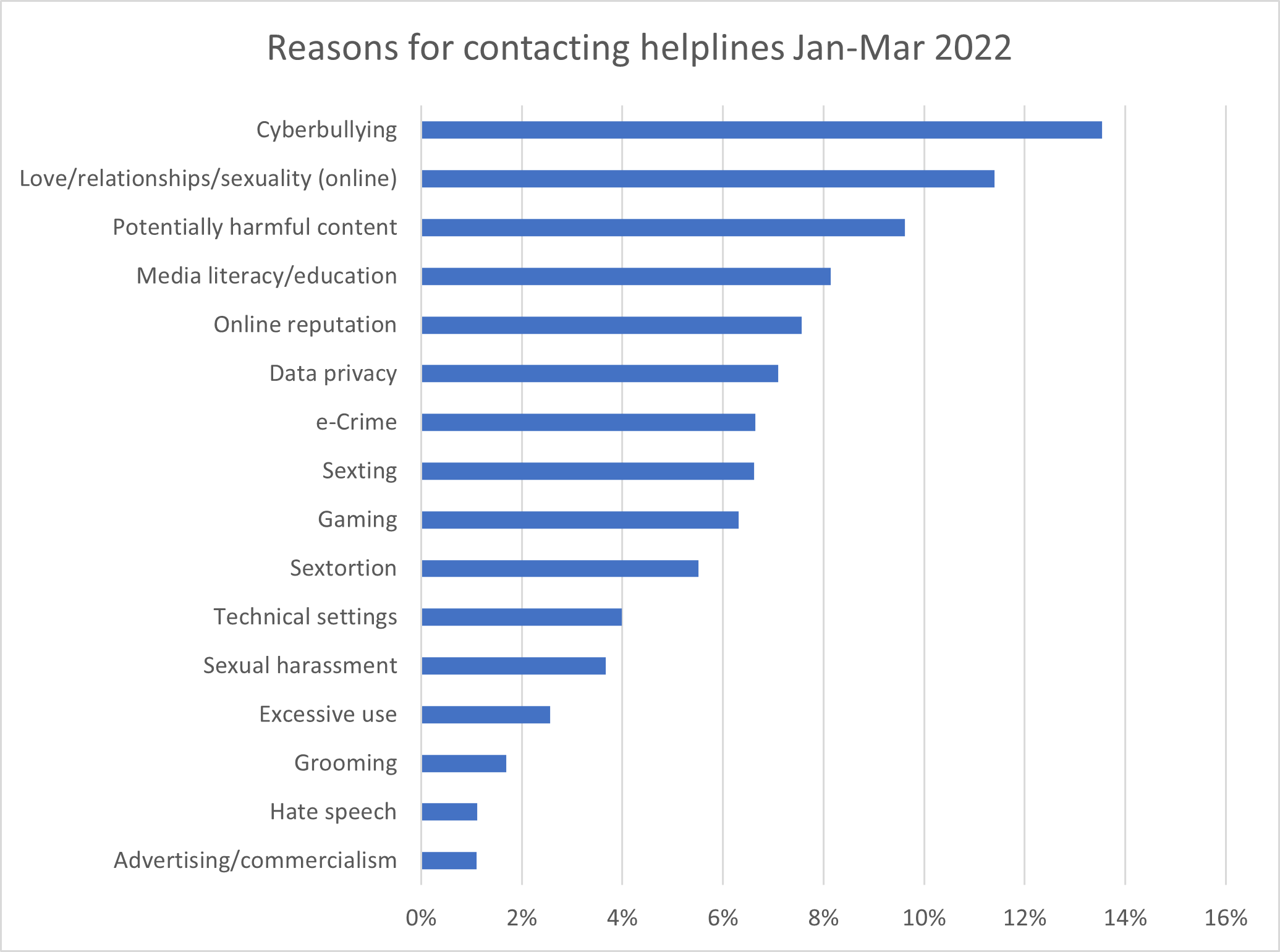 Helpline statistics can be accessed in detail at www.betterinternetforkids.eu/helpline-statistics, where country comparisons can also be made.

Today, the Insafe network of European Safer Internet Centres (SICs) meets for another edition of the bi-annual training meeting. This event is an opportunity to facilitate sharing of experience and good practices between network countries, to explore areas of common ground, and opportunities for closer working between awareness raising, helpline, and youth participation strands. For the first time since the pandemic, the training meeting is being held face-to-face in Brussels, Belgium.

At the beginning of July, the second webinar of the SIC+ programme took place with a focus on the role of parents and awareness-raising activities that address parents. Three organisations shared their knowledge and resources on this topic: COFACE Families Europe, Child Focus and Mediawijs. This article presents the key takeaways of this webinar, including links to relevant resources on the topic of the role of parents and awareness-raising activities for online safety.