The most recent helpline data covers the period from July to September 2020 inclusive. The impact of COVID-19 is still clear with countries in different stages of lockdown and with varying levels of restrictions. Indeed, in some cases, schools had not re-started during this period. 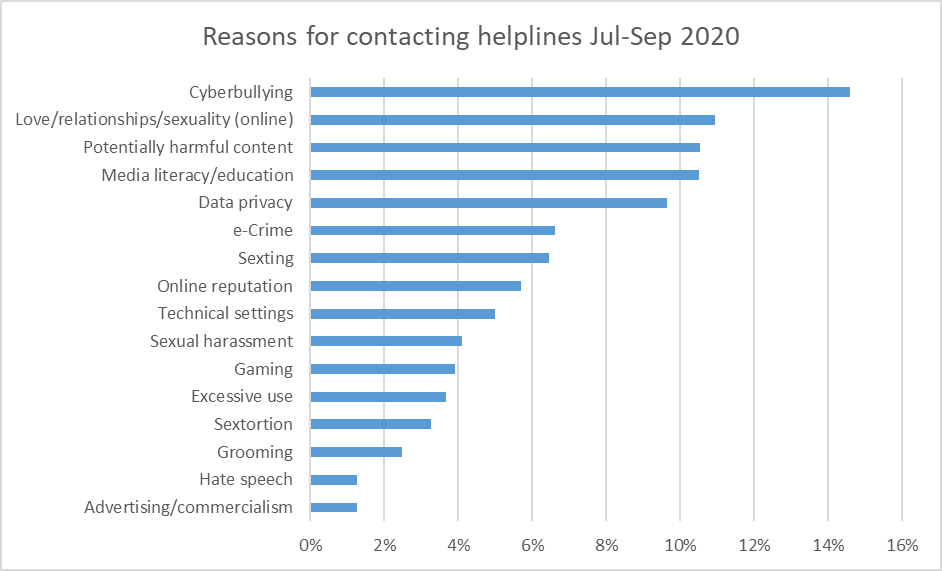 Illustration: Main reasons for contacting the helplines from July to September 2020

During this reporting period, the helpline network received over 13,500 contacts which were related to online issues. This represents a significant decrease on the previous reporting period (April – June 2020) although it is an increase of 33 percentage points on the same quarter in 2019. There has been a greater demand for helpline services throughout 2020 which reflects the impact that COVID-19 is having across the world, and the fact that many people are now using internet services and for greater amounts of time.

As usual there were more calls from females (60 per cent). This quarter also saw an increase in calls from teachers and parents, with some helplines explaining that these calls were made in September when schools returned, and some children and young people were struggling with adapting to the more formal regime and structure having had several months of working/learning from home. Almost 60 per cent of calls came from teens and for most helplines this is their key target audience.

The most common way to contact a helpline is still by phone and 52 per cent of contacts were made in this way during this reporting period. The rise in those using chat to reach helplines that was seen during Quarter 2 of 2020 has been maintained and accounted for 20 per cent of contacts. It will be interesting to see if this continues as lockdown restrictions start to lift in 2021.

As usual, the main reason for contacting helplines is cyberbullying with just under 15 per cent of all calls relating to this. This is a slight reduction on the previous reporting period, but the figure does tend to fluctuate slightly over time. The other key areas of concern that callers got in touch to discuss were data privacy (which accounted for 10 per cent of calls) and love, relationships and sex; media literacy/education; and potentially harmful content (which each accounted for 11 per cent of all calls).

Several helplines specifically mentioned a rise in calls relating to sexual harassment and sextortion; this appears to be a growing problem which is worrying. Safer Internet Centres are working closely to develop resources and awareness-raising materials to address this. There was also a rise of two percentage points in calls relating to data privacy which may reflect a growing number of cases in the media, as well as more people using online services as a result of COVID-19 and worrying about the safety of their data. The Finnish helpline drew attention to the widely publicised hacking of an online therapy service which caused a great deal of concern.

Helpline statistics can be accessed in detail at https://www.betterinternetforkids.eu/helpline-statistics where country comparisons can also be made.

The Insafe network of helplines collects data about the types of calls received and this is analysed every three months to look at trends, and new and emerging issues. The most recent helpline data covers the period from October to December 2020 inclusive and also provides some comparisons between 2020 and 2019 in order to see the impact of COVID-19.

In the spotlight: Safer Internet Centres Germany and Luxembourg

As part of the Better Internet for Kids (BIK) Quality Assurance Programme (QAP), the Insafe-INHOPE Coordination Teams are jointly conducting a set of ten country visits to national Safer Internet Centres (SICs) to better understand what is happening in the Member States: monitoring emerging issues and challenges, identifying good practices to be shared, and harvesting the results of the Better Internet for Kids (BIK) policy. Due to the circumstances caused by the COVID-19 pandemic, a cluster visit planned for the German and Luxembourgish Safer Internet Centres had to be converted to an online meeting that took place between 3-5 August 2020 and brought together a group of diverse stakeholders and Safer Internet Centre consortium partners.

The Better Internet for Kids annual report 2020 is out

The Better Internet for Kids (BIK) review of the year 2020 is released on the occasion of Safer Internet Day (SID) 2021, Tuesday, 9 February. It provides a summary of a multitude of stakeholder efforts to protect children and young people online over the past year.