In the spotlight: Safer Internet Centres in Estonia and Finland

As part of the Better Internet for Kids (BIK) Quality Assurance Programme (QAP), the Insafe-INHOPE Coordination Teams are jointly conducting a set of ten country visits to national Safer Internet Centres (SICs) to better understand what is happening in the Member States: monitoring emerging issues and challenges, identifying good practices to be shared, and harvesting the results of the Better Internet for Kids (BIK) policy. Exchange of good practices and identifying further opportunities for collaboration was also the focus of a cluster meeting organised between the Safer Internet Centres in Estonia and Finland on 9-10 December 2019, hosted at the Sofia Future Farm in Helsinki.

During the visit, both the Finnish and the Estonian SICs took the opportunity to present an overview of the collaborations they have with various stakeholders at national level. The discussion was complemented by interventions from several Finnish national stakeholders, namely The Finnish Society on Media Education, Koordinaatti and the Twitter Head of Public Policy for the Nordics & Israel. They served to showcase good examples of the type of collaborations that SICs have with stakeholders, and helped to uncover similarities and differences in terms of collaboration in the two national contexts.

The discussion illustrated that both SICs collaborate with a wide array of stakeholders: academia, government, industry, associations, civil society organisations, and so on. Furthermore, SICs regularly receive new invitations for collaborations whether on a one-off or a more regular basis.

Raising awareness continues to be a strength for both SICs, reaching more and more individuals.

The Finnish SIC has had a focus on media literacy since 2012. The SIC has been involved in the drafting of the new Finnish media literacy policy; this has provided a good opportunity to raise awareness about the Insafe network since the drafting process has been based on a wide collaboration between policy makers and over 100 organisations.

While the Finnish SIC has a more specific focus on media literacy, the Estonian SIC approaches the topic of online safety in the context of smarter use of the internet and digital communication devices, supporting children, youth, parents and educators with various activities and materials.

The two Safer Internet Centres shared good practices in coordinating youth participation activities. The Mannerheim League for Child Welfare has engaged young volunteers from all parts of Finland in web editing and management of social media via the YouthNet website. This has proved to be very successful in raising awareness among the target audience by producing interesting and engaging content about themes that matter to young people. The amount of visitors to YouthNet has increased significantly: while in 2018 there were 240,000 visits, in 2019 this rose to 700,000.

The Estonian Youth Participation activities delivered in 2019 focused on a co-operation project with the Estonian Ombudsman for Children "Let's Talk Young" in the first months of the year, followed by a Summer Camp seminar for children and young people in August 2019.

Cooperation with BIK Youth Coordinators (through online meetings and training seminars) has been very useful and was mentioned as a good forum to further share best practices in the context of the above-mentioned activities. Furthermore, a mentorship programme between the Finnish and Estonian youth panels was also mentioned as a future opportunity to achieve closer cooperation.

There are two national, toll-free, anonymous helplines in Finland: the parent and child helpline. Both helplines use phone, e-letter and chat, and also provide the option of scheduling a chat time. Helplines use a tool called Power BI to automate data gathering and processing. Within the child helpline, several trends can be observed: the helpline reports an increase in contacts addressing sexual harassment, excessive use and gaming, whereas a decrease is observed in contacts focusing on technical settings and potentially harmful content. 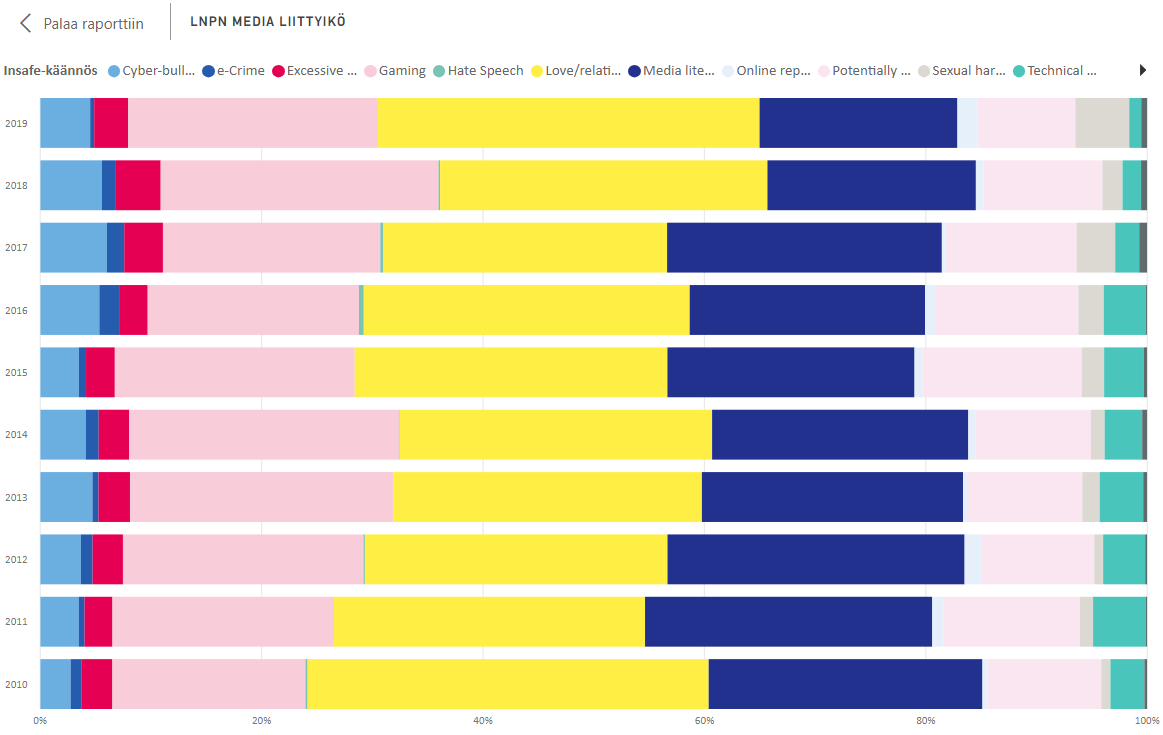 In addition, the helpline observes an increasing number of calls that last longer and often deal with more serious issues requiring professional help. In response, the helpline is focusing efforts on offering long-term, continuous support such as introducing e-letter exchange and scheduling chat discussions.

The Estonian helpline was launched in 2009 and receives structural public funding, unlike some other helplines. The helpline organises an annual campaign to inform the public about the service and about the issues children contact them for, such as relationships with friends, peers and parents; self-harm and cutting; mental health and wellbeing; and abuse (for example, physical, sexual, mental, neglect, and bullying). When it comes to online safety, children most frequently contact the helpline to report posts on topics such as self-harm, online bullying and sexting.

The helpline reports that:

Overall, it was clear from the discussions that there is a good level of cooperation between the Finnish and Estonian hotlines, although they represent different regions. The cooperation is mainly based on topics.

The Estonian hotline (Vihjeliin) primarily focuses on online child sexual abuse material (CSAM). The hotline operates in close cooperation with the Estonian Police and Border Guard Board, and an agreement for handling hotline reports has existed since May 2011. The hotline website is available in Estonian, Russian and English.

The hotline received 469 reports during the period January-November 2019. 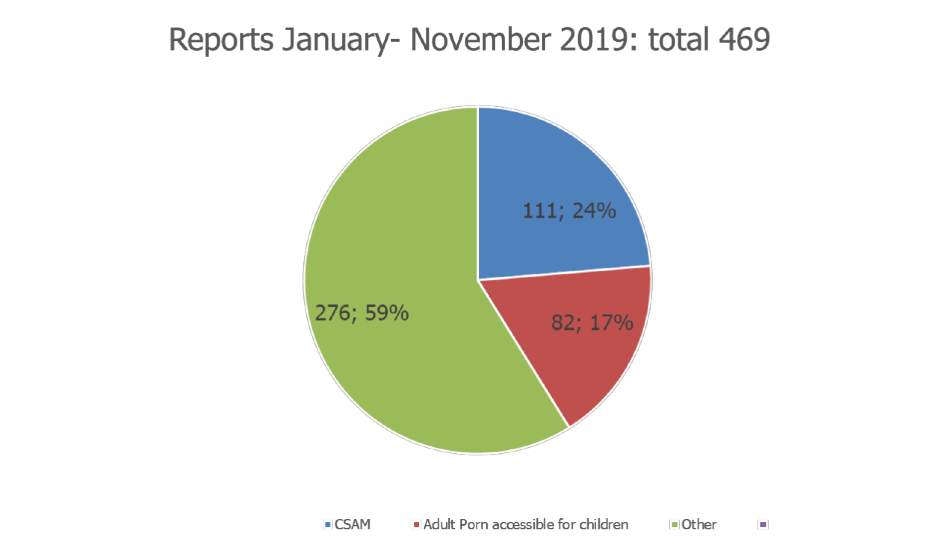 The Finnish hotline receives reports from the public regarding suspected child sexual abuse material and child grooming online. The hotline analysts check each report and make an initial assessment of the legality of the content. Law enforcement is then informed of all material and activity assessed as illegal. The hotline has a good relationship with internet service providers and informs them about problems. Telia is the first internet service provider in Finland to block illegal content.

In addition, the hotline is extensively engaged in awareness work, with initiatives including:

Both hotlines have been reviewed as part of INHOPE's Quality Assurance Programme and have received certification.

All representatives at the meeting recognised the benefit of the "cluster visit" format in enabling easier exchange of practices. The meeting was an excellent opportunity for the Finnish and Estonian Safer Internet Centres to discuss approaches to stakeholder cooperation and plan future exchanges in the area of youth participation. Bringing the two SICs together also allowed for a comparative overview of key trends and challenges in the work of the helplines and hotlines.

Further information about the Estonian Safer Internet Centre can be found on the SIC country profile page on the Better Internet for Kids (BIK) public portal and on the national SIC website.

Further information about the Finnish Safer Internet Centre can be found on the SIC country profile page on the Better Internet for Kids (BIK) public portal and on the national SIC website.