The most recent data collection covered the period from January to March 2017 inclusive and saw 11,561 contacts which all related to online issues. This was a rise on the previous reporting period (9,431 contacts) and is also up on the same timeframe last year (9,059 contacts). 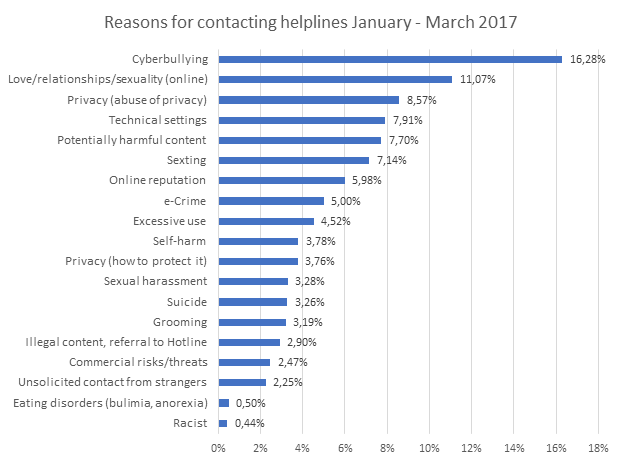 During this reporting period, however, there has been a rise in the number of calls about self-harm and suicide (a rise of one percentage point in both cases) and this may be related to the widespread concern about the Blue Whale Challenge where young people are encouraged to take on a number of challenges which quickly escalate to urging them to self-harm and ultimately commit suicide. Although this has been proved to be a hoax, helplines are very aware that it is having an impact, with some colleagues acknowledging that young people have cut the outline of a whale into their arm. Further information about the Blue Whale Challenge can be found in an article on the Better Internet for Kids (BIK) portal.

Again mirroring the previous reporting period, 60 per cent of calls came from females, with 74 per cent of helplines receiving more calls from females than males. This reflects the ongoing challenge of reaching out to boys, which was the topic of a recent online helpline meeting. It was noted that consideration should be given to how boys are used in advertising for helpline services, with the German helpline sharing some specific examples where boys were used in campaigns.

In addition in this reporting period, many helplines shared positive stories of successful collaborations with social network providers, wider industry and law enforcement organisations, so exemplifying the need for multiple stakeholders to work together to help create a safer and better internet for our children and young people.

The Insafe network of helplines collects data about the types of calls received and this is analysed every three months to look at trends, and new and emerging issues. The most recent helpline data covers the period from April to June 2021 and, unusually, saw a reduction in the number of calls when compared to the previous reporting period. During Q1 there were over 17,000 contacts made to helplines but only 15,733 during Q2. However, this is due in part to changes in the way that some helplines are collecting and reporting data.

The Kanner-Jugendtelefon (in English, children and youth telephone), part of the Luxembourg Safer Internet Centre (SIC) and now available under the international number 116111, was founded in 1992. Over the years, the service has adapted its offer to meet the needs of children and young people in the country, and it has recently changed its name to reflect its evolving nature.

In 2020, the German helpline Nummer gegen Kummer e.V. celebrated its 40th anniversary: 40 years of counselling at the child helpline, 40 years of volunteering, and 40 years of networking with strong partners. During these years, the helpline has offered a safe place to talk in approximately 4.7 million counselling sessions by being there, listening and providing support.